Member of the Black Hills Pack in Los Lobos, South Dakota, Jace Matthews is sent to check out the new owner of a piece of land adjoining his pack’s. Once he steps into her small bookstore in Collins, he’s taken by surprise by the small, prim woman behind the counter. At once, he recognizes his mate. While the wolf inside urges him to complete the bond, Jace knows he must take his time with his human mate. But when danger arises, threatening Michelle’s life, Jace is done waiting. It’s time to claim his mate.

After she inherits her aunt’s property, Michelle Sanders moves to Collins, South Dakota, to escape the monotony of her routine life. Unfortunately, the only person she manages to befriend is not only the hottest guy on the planet, but also gay. However, she never expects a favor for her sexy new friend to result in a series of weird events that will change her life forever.

Melissa is a sweet but tough bookstore owner. The property she inherited from her Aunt abuts Los Lobos territory. Drew sent Jace to investigate the new owner of this property and what he finds is his mate. Finding the scent of hunters on her property he knows he has to step up his game.

I think this is one of my all time favorites in this series. I was laughing so hard at the beginning I must share part of it with you.

Michelle blinked away her confusion and nodded toward the book under his hand. “Find something you like?”

More than you could ever know. He moved his hand and she picked up the book. “Yeah, I’ve been waiting on that one for a while,” he lied. “Can’t get enough of that author.”

Jace couldn’t give a rat’s ass about the book. It was just an excuse to linger in her store. Slow, his pack kept telling him, go slow with her. Well, he had, damn it. Since his shy little mate appeared skittish, he’d come in, browsed the shelves of her store twice a week, making friendly conversation, forming an easy friendship, and biding his time until he had her in his bed and life permanently. But, the time for waiting was over.

Recently, he’d caught another scent when he ran on her property.

The bastards had been sniffing around his pack’s borders and camping on Michelle’s land. No doubt without her knowledge. That gave Jace all the more reason to speed up their odd courtship. Her protection was at stake, and he’d be damned if he left his mate in danger. She was his future.

Michelle’s head popped up, humor sparkling in her pretty eyes. She held up his purchase. “I love the abs on this one.”

He gawked at the semi-naked male torso covering the matte-finished paperback he’d snatched from the shelves without looking.

Michelle bit the inside of her cheek to keep from laughing out loud at the shock written on Jace’s face, though it came as no surprise to her. The hot specimen of male virility that she’d lusted over since he’d sauntered through the double doors of her bookstore was gay.

She winked in an attempt to ease his visible distress. “It’s really a great read. Good choice.”

Bless his little baby heart. “Sure.” She moved to the register and rang up the romance novel.
Claiming His Mate (Black Hills Wolves Book 5) (Kindle Locations 48-65). Decadent Publishing. Kindle Edition.

A greedy land developer and hunters step up the game in this one. A unique view of the mating dance to be sure. A definite must read! 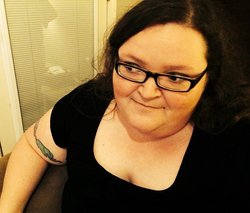