His darkest secret is revealed while her greatest fear comes to life.

New mother and Divinity, Lydia Rayners, is no stranger to heartache and loss. Her father, husband, and brother were taken from her by the demons, and now they want her son. Lydia will never let that happen, and she is determined to bring them down one by one—by herself if necessary. Her plans are going well until a certain sexy deputy discovers that she’s the rumored demon slayer and is hell-bent on stopping her.

Witch and deputy sheriff, Zach Manus, has run from his past for too long and it’s catching up to him now. He’s determined to keep his dark family secret hidden as he fights for control over his emotions and growing powers. His darker side controlled him once before, and he won’t let it happen again. But the closer he gets to Lydia, the more the darkness threatens to consume him, just as the gorgeous Divinity consumes his thoughts and threatens his resolve.

Zach is powerless to resist her, and while Lydia may understand him like no other, trusting her might unleash a new dark power that could destroy them both and put everyone they love in danger in the process.

There is so much going on in this series, first we have the demons and their agendas. They want either the Sinew or to create their own, and they want the Dark Devine adults and children.

The Divinities on the other hand are the protectors of the Sinew and the Dark Divine and want to put an end to this war once and for all.

It seems Zach and Lydia have some secrets, secrets they are not going to be able to hide from the others any longer. But they are fated mates. this is a favorite scene.

He raised his lashes and held her stare. With a smile, he said, “Come on, you can lay him down in the spare room.

She followed him down a short hallway and then turned left into a… nursery. A nursery? Whirling around, she peered at him with a load of questions running through her mind. “This is more than a little creepy. Please tell me you’re not hiding a wife somewhere and that you didn’t lose a child—”

He pressed a finger to her lips, stopping her from saying anything more. “I’ve never been married, and have never gotten anyone pregnant.”

“Then what is this?” She motioned to the room, keeping her voice calm and low so she wouldn’t wake Logan.

He let his shoulders fall as he leaned against the doorframe. “I started on it after Cassia was born. Bethany had a hard time adjusting to motherhood at first and needed a quiet place to stay. So she stayed here with the baby.”

She frowned. “Bethany? I can’t imagine. She’s a wonderful mother.”

“She always has been. It’s more like the witch’s version of postpartum.” Zach motioned Lydia inside.

He was not telling her something, but she let it go. For now. “But why haven’t you taken down the crib? I mean, Cassia is sleeping in a toddler bed now, right?”

“I had a feeling that I’d need it.” He rolled up the sleeve of the blue button-down he wore. When he got the sleeve rolled up to his elbow, he turned over his arm. Lydia gasped, her heart beating so fast that she feared it’d leap right out of her chest. On the inside of Zach’s forearm were faded double roses connected to a vine that held a small bud.

She started to shake, but it wasn’t out of shock. Fear, glee, and confusion consumed her. She’d tried to deny it over the last few months. Hiding her own new faded rose that had appeared next to the Divine Rose she’d been born with.

Zach stepped closer and spoke in her ear. “Yours appeared, too, didn’t it?”

Afraid to speak, she just nodded. There was no use lying to him. He was an empath, he’d know before she spoke the words.
Davis, Lia. Dark Divine (The Divinities Book 3) (Kindle Locations 482-503). After Glows. Kindle Edition.

Things move fast in this book, Samoan causes more trouble and things keep just keep escalating. Loved every page turning minute as the Divinites have more and more to overcome. 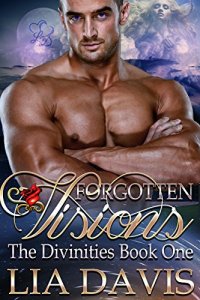 In 2008, Lia Davis ventured into the world of writing and publishing and never looked back. She has published more than twenty books, including the bestselling A Tiger’s Claim, book one in her fan favorite Ashwood Falls series. Her novels feature compassionate yet strong alpha heroes who know how to please their women and her leading ladies are each strong in their own way. No matter what obstacle she throws at them, they come out better in the end.

While writing was initially a way escape from real world drama, Lia now makes her living creating worlds filled with magic, mystery, romance, and adventure so that others can leave real life behind for a few hours at a time.

Lia’s favorite things are spending time with family, traveling, reading, writing, chocolate, coffee, nature and hanging out with her kitties. She and her family live in Northeast Florida battling hurricanes and very humid summers, but it’s her home and she loves it!