Heather Simmons is excited to start a new job in Alberta, Canada, as a glaciologist. But when a minor accident leaves her trapped on a hiking trail overnight, she finds herself facing a burly mountain man and a pair of grizzly bears. From that moment forward, things could not get weirder.

Isaiah Arthur knows instinctively that Heather is his mate the moment he scents her clothing before heading up the mountain to rescue her. The sensation is confusing since she is obviously human, and converting a human to his species is strictly forbidden.

A rogue shifter takes Heather’s transition out of Isaiah’s hands, however. Isaiah is left with no choice but to take her home and find a way to inform her of her unintended fate, while fighting the intense need to make her his as soon as possible.

The North American governing body, the Arcadian Council, is not amused by the rare turning of a human, and chaos ensues as Isaiah races against the clock to bind his mate to him forever before someone steps in the way and takes the opportunity out of his hands.

If you don’t already know I love shifters. I really don’t care what animal they just call to me.

Grizzly bears are huge and you never want to interact with one. One of the first things I noticed with Heather hiking alone is that she didn’t seem to have some safety items, bear repellant would be a thought. The other thing, no matter how experienced you are you should always hike with someone. Case in point, this story.

Now Heather was experienced, it was a day hike, although she started later than she should have. Injuring her ankle was unexpected and she was at least prepared should she have to spend the night in the wilderness. Her mother notified the park rangers when she didn’t check in so that was good too.

Isaiah is a shifter, he and his family often help with tracking lost hikers. This time was different though. From the moment he scented her he knew she was his. His mate, but that couldn’t happen she wasn’t a shifter, she is human.

Getting in the face of a bear isn’t something Heather is used to seeing and neither is two bears getting into a fight. That is what happens, unfortunately not before she is clawed. In this respect these bears are different from other shifters I have read. This ‘scratch’ is going to change her life.

From meeting his family and having her injuries tended to calling her parents to let them know she is safe, Heather has no idea what’s coming.

The Arcadian Council sends representatives to be sure she doesn’t leave Isaiah’s home and others search for Jack, the bear who attacked her.

This is a favorite scene as Isaiah tries to get her to understand what’s going on.

He shook his head. “You have no idea the danger you’re in or what I’m protecting you from. Those guys out front won’t hesitate to take you with them. I doubt I would ever see you again.”

“The bears? The two bears out front?”

“There are four of them, but yes.”

“What are they doing? Guarding your home?”

“No. They’re not keeping anyone out, baby. They’re making sure you don’t leave. I made a deal with them to give me some time to help you shift. The only reason they probably agreed was because none of them want to deal with an independent shifter in the back of their car on a trip north.”

“An independent shifter?” She felt like a parrot. And why the hell was she bothering to continue this ridiculous conversation?

“As in not having a pack. Alone. When you transform, you’ll automatically be a free agent, so to speak. A shifter without a pack. You’ll be able to choose your own pack. I’m hoping you’ll choose mine, but I can’t stop you from choosing whatever you want. You have your own free will.”

Progress. He admitted she had free will. That had to be worth something. He kept speaking, his tale growing by the minute.

“A scratch that draws blood forces a human into the change. If Jack had bitten you, his bite would have forced you to become a member of his pack without consent. And finally… a bite with the right secretions from his saliva would have bound you to him for life as his mate.”

She tried to focus on his words, but they were so preposterous.

He leaned closer, his face inches away. “I want the man that bites you and binds you to be me.”

“I see.” She saw nothing but a pile of insanity. She also shivered and tipped her head to one side, thinking about the spot where he’d set his teeth on her earlier and then licked.

“If you still want to go with them after you change and understand the implications fully, I won’t stop you, but for now, you’re humoring me with extreme skepticism. I can’t blame you, but I also won’t let you put yourself in danger.”

It was true he didn’t seem mad. Just frustrated. She bit her lower lip to keep from saying more.

“You’re burning up with fever, baby.” His words were far gentler. “Our body temp runs a bit higher than humans, but the fever is from your body fighting off the need to shift as if it were a virus. When the bear wins, you will shift, and the fever will disappear.”

She struggled to follow his logic. “You think I’m going to become a bear soon?”

“And you intend to help me.”

Now there are many implications here and many things to be explained and worked out. Most importantly her safety, her choice in pack and their mating.

Don’t forget to enter the giveaway below!

Carol Kittie Reviews is giving away the items below to celebrate Becca Jameson’s Arcadian Bear Series. 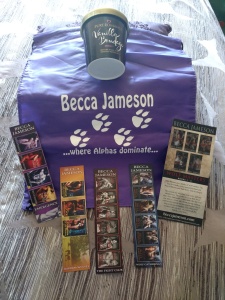 Becca Jameson
Becca Jameson currently lives in Atlanta, Georgia, with her husband, two kids, and the various pets that wander through.