Gwennore is an Elf able to track down the cause of a certain illness and heal it—a valuable asset to her people. But when she is thrust into the realm of the dragons, she discovers a haunted place of power, passion, and magic—one that is plagued by an ancient curse. When she meets the smoldering General Silas Dravenko, Gwen knows she’s entered a whole new world of trouble. She’s been raised never to trust a dragon. So why does making a deal with the devil feel so good?

Silas has no way of saving the royal family he’s served for years. But when a beautiful, innocent elf comes bursting into his world, Silas is awakened to desire in a way he’s never felt before. But how can he trust a sworn enemy. . .and how can he live without her.

Once again I have started a series at the end instead of the beginning. I was fortunate to be given an ARC of this book by the publisher and now I am totally hooked on the series.

When the little Eberoni Princess Eviana is snatched up by a dragon, Gwennore grabs ahold and doesn’t let go. The bad news the dragon manages to shake her loose, the good news  the dragon chasing after the first one is able to catch her saving her from certain death.

From here the exchanges between her and the dragon are hysterical given the circumstances.

This is a favorite scene as they fly to the dragons home.

She waited, but there was nothing more, only that same feeling of amusement she kept getting. Was he playing with her? Blast him. “If you won’t tell me, I’ll be forced to name you myself.”

“You should be. I could name you…Puff.”

He snorted, and more hot air escaped his nostrils.

I could drop you.

She squeezed his leg, pressing her face against the leathery skin. It was surprisingly soft.

Oh, he was definitely playing with her. She was tempted to hit him. “Tell me, Puff. Why did you bother to save me if you won’t even introduce yourself to me?”

I took pity on the trees. Your fall would have torn off some branches.

She slapped his leg. “That’s not funny.”

Did you just hit me? After I saved you?”

She winced. “It was a friendly pat. Did I mention how grateful I am that you rescued me? It would be a shame to harm any of the trees, don’t you think?

A low grumbling sound reverberated through her mind. Was that a dragon chuckle? It had a very pleasant and soothing effect, even though she ought to be peeved that he found her so entertaining.

I could take you back to your friends, but I’m assuming you wish to remain with the little girl.

This was just the start of a very difficult relationship. Especially since “Puff’s” brother is responsible for the kidnapping. However once they arrive at the Castle it becomes apparent that the queen is ill and looking to replace her deceased children. The King has to be convinced to return the child, and the General want’s Gwennore’s help in finding the answer to the queen’s illness.

An awesome world that has me wanting to read the series from the beginning. The difficulties Gwennore faces as she attempts to solve the mystery of ‘the curse’ will keep you spellbound. As for her relationship with General Silas and the dragon ‘Puff’, well I found myself laughing out loud many times, and holding my breath in at others.

Definitely one to add to your to be read piles! 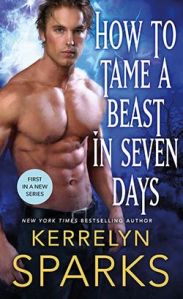 Kerrelyn Sparks apparently has issues with reality. After writing more than a dozen books about vampires, she has now completely gone off the deep end and wound up on another planet. But how thrilling that she can share this magical new world with her readers! Although she is best known (so far) for the Love at Stake series, which has hit as high as number 5 on the New York Times list and 22 on the USA Today list, she hopes her readers will love The Embraced as much as they did her merry band of vamps and shifters.

To learn more about her paranormal, historical, and upcoming out-of-this-world fantasy romances, please visit Kerrelyn on Social Media, links are below.