Former Special Forces brothers-in-arms now working together to provide an elite security service in the southern city of Richland.

Gabe Malloy, dedicated to his brothers, spent his weekends with cheap booze and easy women. When some of his friends finally settled down, he wondered if he would ever find the woman of his dreams. He just never expected to encounter her in an alley.

Jennifer Lambert worked as a social worker for the city and would often take food to the elderly residents in her building. One night, in an alley behind a restaurant, she was startled by a tall, handsome man wanting to assist. Giving him the cold shoulder, she left…but dreams of him followed her long into the night.

Gabe knew the independent Jennifer was a woman worthy of knowing, but convincing the beauty that she needed him was the challenge. Raising her young brother plus the responsibilities of the elder center, had kept her from looking for love…but she took a chance on Gabe.

Now that he found her, can he keep her safe when someone threatens her and those she loves? Calling upon his brothers, Alvarez Security races to save her before it is too late.

****Due to scenes of an explicit sexual nature and language that some consider crude, please be warned – for 18+ only! If you do not like alphas with heart who fall instantly in love with strong female characters while dealing with real life issues…again be warned!!*****

Going back and re-reading is one of my favorite things to do. In doing so I am going to review those that aren’t already done. This is one from 2015, and I love it!

Gabe gets the surprise of his life while on a break from his bodyguard duties to actress Alicia Morgenstern. What he thought was a dumpster diving child was instead a beautiful young woman.

Jennifer is looking for a box to put the leftover unused bread and food from the kitchen of the hotel in. The manager donates to her center for the elderly. She never expected to meet a blond haired giant who suddenly has a movie star hanging all over him.

Star-struck and not by Alicia, Gabe makes it his personal mission to find the lovely young woman he startled in the alley. What he finds pleases him and he knows he has finally met the woman he is meant to be with, but he has to convince her of it.

Jennifer is a social worker whose focus is on the elderly. She lives with her little brother at the center she obtained the grants for. Grants that included a 5 year lease. She isn’t looking for love but she may have found it anyway.

This is a favorite scene after Gabe has almost made her acquaintance twice, and finally succeeds behind the restaurant again. Well sort of anyway.

“What do you mean you came here to meet me?” she asked incredulously. This man hangs out with movie stars. Or women in bars that look like they could be in movies. Well, playing the trashy slut in a movie. What the hell does he want with me?

Gabe, mesmerized by her blue eyes, could see the questions flying through her mind. He slowly reached out his hand and cupped her face, feeling her cold cheek pressing against his hand. “I wanted to meet you.” Seeing her about to retort, he continued, “I work for a security company and was on duty providing security services for the event. And yes, that included making sure that Ms. Morgenstern Morgenstern was safe. I was on my much-needed break when I saw you out here.”

Jennifer felt his calloused thumb rub over her frozen cheek and couldn’t help but slightly move her head toward the warmth. For an instant, she allowed herself to forget that she was there to pick up food for the center, or that she was only a city social worker not a socialite, or that Ross wasn’t home waiting…Ross! Shit! Jerking back suddenly, she turned and tossed a few more bags into the back of the truck shouting her goodbyes to Carlos as he went back inside.

“Wait,” Gabe moved forward stealthily, taking her arm and gently turning her back around to him. “What’s the hurry? I’d like to help.”

Nodding toward her truck, he said, “Yeah. With the food. With whatever you’re doing.” Seeing the doubt in her eyes, he hurried to keep talking. As long as she’s not walking away from me, I’ve got a chance. “Look, I know we didn’t meet under the best circumstances. In fact, it was pretty fucked up,” he admitted shaking his head at how the scene must have looked to her. And then he thought of the scene outside of the bar and he visibly cringed.

Taking a deep breath, he rose to his full height and moved back a step, putting his hand out toward her. “Good evening, Miss. I’d like to introduce myself. I’m Gabriel Malloy. I work for Alvarez Security Agency and I would very much like to make your acquaintance.”

A giggle erupted from her perfect lips and she could not help but take his huge hand in her much smaller one, noticing how he held it delicately as though he did not want to crush her. She knew she was blushing again, but somehow the look of uncertainty on his face was endearing. “It’s nice to meet you Gabriel. I’m Jennifer Lambert.” Trying to pull her hand back, her face shadowed with doubt as she accused, “But you knew that, didn’t you?”

He held fast to her hand saying, “Yes, that’s true. But I promise I’m no random stalker. I just…” Finding himself uncharacteristically not in charge, he floundered. How can I tell her that after years of meaningless sex that I want something more? And when I saw her, I felt something. Something deep inside. And since then, I haven’t been able to get her off of my mind?

Focusing back on her face, he saw the doubt moving back in and noticed her taking a step backward toward the truck.

“I’m not a stalker but I wanted to meet you. And the two times we met have been completely fucked up. I’m not like what you saw. At least not anymore. At least not now.”

“Gabriel, look I have no idea what you are trying to say to me or why you wanted to meet me so much. I don’t know what you think I am, but—”

“What do you mean, what you are?” he asked sharply.

“Look, if you’re looking for a little woman to save, I’m fine. I get the food for people who need it and work hard to make sure the arrangement works. But if you are looking for some kind of rescue, I assure you that in spite of what some think, I’m not alley trash!” she exclaimed, throwing Alicia’s words back in his face.

Growling, he moved into her space slowly pressing her back up against the door of her pickup truck. “Those were not my words.” Tipping her chin up with his fingers, he leaned down until his lips were a breath away from hers, noting that she did not move away. Instead, her eyes widened as her pink tongue flicked across her lips, making him impossibly hard. With no resistance in her eyes, he moved closer capturing her mouth in a kiss.
Jordan, Maryann. Gabe: The Alvarez Security Series (pp. 46-49). Kindle Edition.

Now getting to know Jennifer isn’t an easy thing and Gabe experiences plenty of frustration.

I love these two together and unbeknownst to either of them the Center has caught the eye of a real estate mogul who doesn’t like to fail and the excitement begins. 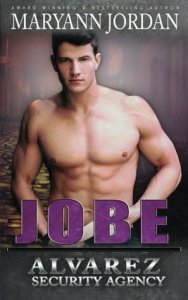