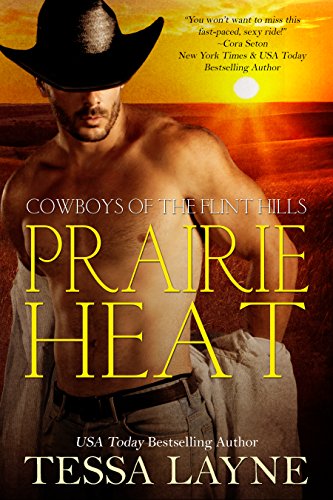 Blake Sinclaire has the perfect plan to reclaim the land Warren Hansen stole from his father. The only problem? Warren’s daughter, sexy super-scientist Maddie, stands in the way. The only other problem? He wasn’t supposed to fall in love.

A standalone, modern-day Hatfields & McCoys filled with family feuds, fake engagements, explosive secrets, memorable side-characters, and a Happily Ever After that will make you swoon.

I started reading this series because of Tessa’s contribution to Protected by A Hero. The characters in that book were so vibrant, I had to know more about them.

This first book centers on the feud between the Sinclaires and the Hansons. Blake wants the land Warren Hanson stole from his family back but when he confronts him the unexpected happens.

Warren wants him to marry his daughter Maddie and after dropping that bomb he collapses.

This is a favorite scene with Maddie, Blake and her dad after he wakes from surgery.

Maddie stepped forward, reaching for his hand and sinking into one of the chairs set up next to the side of his bed.

His eyes widened as he tried to speak again. “What happened?” he rasped out, his voice barely above a whisper.

“You had a massive heart-attack, Dad. We nearly lost you. If it hadn’t been for Blake…” She turned, acknowledging him with a grateful smile.

Something warm puffed up inside of him as he basked in her appreciation. God she was beautiful. He leaned against the doorjamb, and shoved his hands in his coat pockets. Warren grunted and tried to raise himself.

He wheezed, pinning his eyes on Blake.

Covering the distance to the bed in two steps, he settled himself next to Maddie, and stretched his hand around the back of her chair. “Near death has done wonders for your disposition, sir.”

A small smile broke across Warren’s face, and he wheezed out a cackle. He shut his eyes, still smiling. Even with the oxygen tube, his breathing remained labored. He raised his finger, waving it between the two of them. “Glad to see…. You two’ve worked things out… Maddie Jane.”

What was the old man playing at?

“Of course, Dad. I’m here as long as you need.” Maddie squeezed her father’s hand reassuringly.
Warren opened his eyes again, and looked straight at him. His blue eyes, the same intense hue as Maddie’s, penetrated Blake like a laser. “Our families… this fighting… So glad… over.” Warren sighed shakily.

The anesthetic must have rattled his brain. Or the meds.

Looking back, Blake could never say definitively what made him act so irrationally. It was like some unseen force propelled him to action. He leaned forward, clasped Maddie to his side, and patted Warren on the leg. “Of course, sir.” His hand gripped her shoulder tightly. “I’ll make her very happy. You have my word.”

Ooh, he would pay for this.

In this life or the next.

Of that he was confident.
Layne, Tessa. Prairie Heat: Cowboys of the Flint Hills (pp. 93-95). Shady Layne Media. Kindle Edition.

Maddie has a lot to resolve both personally and professionally.

Family secrets uncovered and in spite of themselves the heat between Maddie and Blake burns hotter and hotter.

I enjoyed meeting the Sinclaire and Hanson families. Plus a host of other characters.

Prairie Kansas appears to be a great place to get lost in for a while. Laughter, gossip, tears and plenty of family drama.