Losing his leg was hard enough. He wasn’t about to lose his heart too.

Bookworm, Harley Tate, thought showing up uninvited was a good way to catch Penn Jericho by surprise, but what she didn’t expect was that her idea would backfire. She landed in the arms of the sexiest cowboy she’d ever seen, and the little fact that he was naked and kissing her in a way she’d never been kissed before couldn’t be ignored.

From the second he realized he was groping the wrong woman, Penn should have backed off, but there was something about the woman with the too-big glasses and chocolate eyes that struck him hard in the chest. He hadn’t been thrown for a wild loop since the accident and waking up to find that he’d lost a leg. So when she blames him for all her problems, instead of sending her on her way, he brings her home.

Staying with Penn is the safest place for Harley, but she can’t stop fantasizing that he’ll kiss her again. Touch her like he did when they first met. Penn is sidetracked by the beautiful, brave woman who is surrounded by suspense. To save her, he needs to keep his head on straight, but that’s a difficult task when she makes him forget that he has no desire to make room in his life for a relationship.

For Penn, I don’t believe there could be a worse feeling than to have a person you’ve been investigating appears on your doorstep with the reasons why you shouldn’t be investigating them. Especially when your expecting someone entirely different.

This book had me giggling from the start, Penn was so screwed and Hailey most certainly not who he was expecting.

Looking over her data, he takes her as a client. She needed protection and since it appeared they messed up, they would provide it.

This is a favorite scene where Penn convinces her to move to his house for protection.

Harley couldn’t remember feeling so confused and forlorn in all her life…or so desperate. She’d been dealing with Marshall for too long now. Had been looking over her shoulder, suspicious of every stranger, curious of every shadow. The hair on her nape lifted and fear slithered down her spine.

She could call Jodi and knew she’d be more than welcome to stay with her, but Harley couldn’t. Not when she could be putting Jodi and Carlos in danger. Harley had no idea how far Marshall would go. A man who would break into her house wasn’t thinking of consequences. The last thing her friend needed was to have their household turned upside down. Although there was no evidence that Marshall was involved in this, Harley knew, without a doubt, that he had everything to do with this.

“I could stay at a hotel,” she muttered.

He pushed a hand through his hair. One corner of his mouth lowered. “The closest one is over an hour away.”

“Yeah. I know what those wet pellets falling are.”

She drew in a deep breath and exhaled. “Right. I’m sorry. My nerves are a little wound up.”

She could barely believe how her life was in a turmoil. Tonight, she needed to find a place to stay, and tomorrow she could figure more out. She could piece everything together. Now this man, who’d all but kissed her concern away and saved her life was offering to help her after he had earlier told her he wouldn’t. He wanted her to believe she was safe with him, but trust didn’t come easy for her, especially for men these days. They were known for saying one thing and doing another.

Truthfully, she needed Penn’s help. She couldn’t stop Marshall alone, and if she stayed by Penn’s side he couldn’t change his mind in helping her.

“You can stay at my place because I know you’ll be safe there. Tomorrow, after a good night’s sleep, we’ll figure this out.”

“I don’t know you.” And yet she knew quite a bit about the Jericho brothers. Jodi had told her everything. So, in the scheme of things, she did know him…in a way.

The irritation grew in his expression. He opened his mouth, probably to try and convince her when a loud thud sounded from inside of the room. The next thing she knew, she found herself in Penn’s arms, cuddled against his iron hard chest, wrapped in his thick, warm arms.

“Oh, it’s just the cat.” She giggled at her hyper-sensitivity. Theodore had jumped up on the dresser and knocked over a book.

She lifted her chin and looked up into those amazing blue-silver eyes. She darted her tongue out to moisten her lips, realizing her heart was pumping fast. And she was shaking, both from fear and being so close to him, twice in one night. That was a lot of feeling for her to soak in.

“You okay?” His butter-soft voice made her inner thighs tremble.

Then the fear dissipated and something else took hold. Something far more dangerous than burglars in the night and powerful men who couldn’t take no for an answer. She’d been struck with the force of a sledgehammer straight in the chest at the realization that Penn Jericho was the sexiest man she’d ever seen, if not the sexiest in the world.
Carver, Rhonda Lee. Penn’s Fortune (Saddles & Second Chances Book 2) (Kindle Locations 700-733). Kindle Edition.

Penn tries his best not to let Hailey get under his skin. But after a dance recital and a family meal he knows he’s met his match.

Hailey is smart, beautiful and full of sass. Perfect for him, but first they have to nail down the issue of their previous client. Who may or may not be threatening Hailey.

A sizzling page turning read with a twist I didn’t see coming, at least not right away. 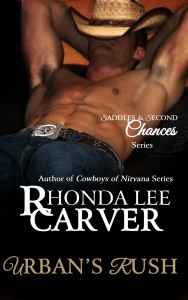