From New York Times bestselling author Laura Kaye,
comes the next standalone title
in her Warrior Fight Club series,
FIGHTING THE FIRE.
Check out Laura’s note below
and the beautiful cover!
Then join the Warrior Fight Club world
today!

A note from Laura Kaye:

I love enemies-to-lovers stories because they’re so much fun to write and absolutely delicious to read! And Sean Riddick and Dani England from my upcoming Fighting the Fire are absolutely incendiary together! They’re both bad asses in their own right—both veterans, both fighters, both stubborn as hell. And boy does this cover art capture them so well—the intensity, the passion, the push and pull. Gah, I hope you love it as much as I do!

If you haven’t started my wounded Warrior Fight Club series yet, you can jump in anywhere because they’re all sexy standalone romances! So start at the beginning with Fighting for Everything or grab the about-to-release Fighting for What’s His. And here’s where you reserve your copy of Sean and Dani’s hot, hot story: 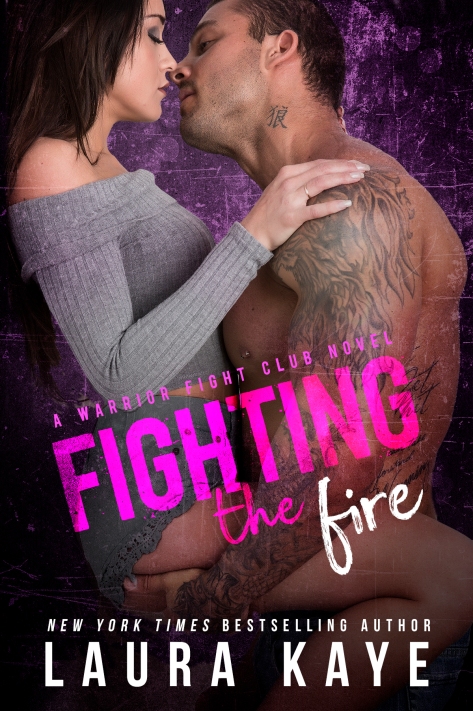 The more they fight, the more desire consumes them…

There’s only one thing firefighter Sean Riddick doesn’t like about Warrior Fight Club, and that’s Daniela England, the sexiest, snarkiest, most irritating woman he’s ever known. But MMA training keeps the Navy vet grounded, so Sean’s not about to give it up, no matter how many times he goes toe to toe with Dani—or how bad he wants to take her to the mats.

A former Army nurse and the widow of a fallen soldier, Dani is done with the military and with military men. Fight club is the only thing that eases her nightmares, which means she has to put up with Riddick. He might be sex on a stick, but he’s infuriating and everything she’s vowed to avoid.

But when an accident throws Sean and Dani together, all that fight bursts into a night of red-hot passion. Now they’re addicted to the heat and must decide if the one person they’ve most resisted might be exactly what they’ve both been looking for.

Laura is the New York Times and USA Today bestselling author of over twenty books in contemporary and paranormal romance and romantic suspense, including the Hard Ink and upcoming Raven Riders series.

Growing up, Laura’s large extended family believed in the supernatural, and family lore involving angels, ghosts, and evil-eye curses cemented in Laura a life-long fascination with storytelling and all things paranormal.

She lives in Maryland with her husband, two daughters, and cute-but-bad dog, and appreciates her view of the Chesapeake Bay every day.