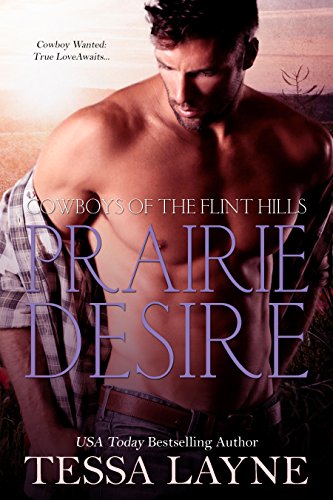 What’s a guy to do when the girl of his dreams makes a pass at him?

Saying no to Hope Hansen was the hardest thing Ben Sinclaire has ever done. Despite the fact that he’s loved her since grade school, between their age difference and a family feud, a romance between them was forbidden. But now she’s back and the girl he loved has become all woman. He’s finally ready to make his move, but he’ll have to get around her brothers and a field of admirers to do it.

What’s a girl to do when faced with the worst mistake from her past?

Eight years ago, Hope took a chance on Ben and got shot down. Heart broken and mortified, she left town. A fiasco at veterinary school foils her plan to avoid him forever by forcing her to come home to Prairie. When her brothers meddle in her love life by placing a Cowboy Wanted ad for her in the back of Rancher’s Monthly, Ben becomes her unlikely ally. As all her feelings come crashing back, Hope isn’t sure if she can trust him… or herself.

Ben comes up with a daring plan to win Hope, but when ice storms, weddings, and babies interfere, will it backfire? Or will Hope realize that true love has been waiting right under her nose the whole time?

Ben and Hope have big secret, they have been friends for years but never said a word to anyone because of the feud between their families.

As children they built a treehouse together, just out of sight of either family. When he hears she’s coming home, Ben visits it he finds it destroyed. In that moment he decides to rebuilt it.

There was more there though, Ben had rejected Hope when she asked him to be her first lover. After reconsidering, he returned to hear her with someone else in their space and once again left.

This is a favorite scene when Hope visits the newly built treehouse.

A look of pure anguish twisted the softness in her face. “Our business finished the night you told me I was crazy and just a kid.”

He cringed as his conscience pricked at him. That pain was all because of him. “About that…”

Her mouth pinched closed, and she shook her head firmly, hugging her arms. “Oh no. You don’t get to throw away a friendship then waltz back in eight years later a-an-and build me the tree house of my dreams. What were you thinking?”

She was good. Throwing his words back at him like that. At least she’d noticed he’d included every detail she’d ever dreamed about in the new structure. He’d take a small victory. But it irked him she was accusing him of throwing away their friendship when she was the one who’d broken their rule and brought someone to the tree house. “Who exactly threw away our friendship?”

She shifted her weight, arms still crossed defensively. A move that, if she hadn’t been wearing a leather jacket, would have accentuated her curves. God, he ached to run his hands under her coat and familiarize himself with the sweep of her breast, the dip of her waist. His fingers twitched at the thought. He’d replayed that night countless times, always taking things further than they’d gone.

“Considering you were the one who said I ruined everything, you did.”

He stood, bracing his hands against the large crossbeam, and leaned toward her. “You broke the kissing rule.”

Her eyes widened at the accusation. “What do you mean? I didn’t kiss anyone. Well, except you, and like you said, that ruined everything.”

“What about the next night? I came back. You were here with a boy.”

She sucked in a breath, face registering shock. “You came back?” Disbelief colored her voice.

He gave her a crooked smile. Might as well throw all the cards on the table. “It’s possible I had a change of heart.”

The look she leveled at him was weighted with suspicion. “You had a change of heart.”

“I came back.” He sighed heavily, insides roiling in discomfort. Nothing about this conversation was easy. “I wanted to set things right. And, yes, I wanted to kiss you.” He let that sink in. “But you were… occupied.”

Her mouth dropped open, and just as quickly, she snapped it shut and pinched her nose at the crease between her eyebrows. Dropping her hand, she glared at him, shaking her head. “Oh no. You don’t get to do this.”

“Do what? Clear the air?” The tree house suddenly felt confining. Like the two of them were too much for the walls. This conversation was too intense for the small space.

“You do not get to put the demise of our friendship on me. You left. You bailed out.”

Maybe coming here had been a mistake. Maybe he should have let sleeping dragons lie. He let years of pent up emotion get the better of him as his voice rose. “I came back.”

“Did you think after you humiliated me, I would wait around for one second?” Her voice trembled with barely contained outrage.

“I thought you wouldn’t run out and drag the first piece of ass you could find into our tree house.”

Hope’s eyes flashed fire. He knew he was pushing her buttons. He couldn’t help it. He’d been sucker punched that night, hearing her laugh with someone else.

“Our tree house? If it was ours, how come you stayed away? This has always been my sanctuary, my retreat.”

“Bullshit. Now you’re being melodramatic. It’s been ours since day one, and you know it.”

He’d stayed away more than he should have those last few summers before everything blew up, but he couldn’t watch her turn into a woman, knowing she was off-limits. Jesus. He was only human.
Layne, Tessa. Prairie Desire: Cowboys of the Flint Hills (pp. 29-31). Shady Layne Media. Kindle Edition.

Now it’s going to take a lot to mend this but her brothers inadvertently help her when they do the unspeakable. They take out a personal ad for her in Ranchers Monthly.

Paybacks are a bitch and revenge is best served cold. I loved Hope’s revenge.

She also is hiding something and that could ruin her relationship with Ben.

I laughed a lot, sniffled a little and enjoyed every page of this book! 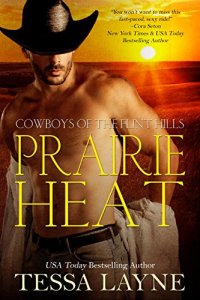 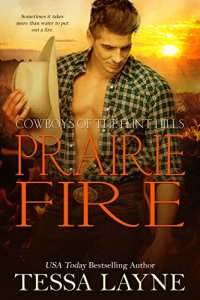