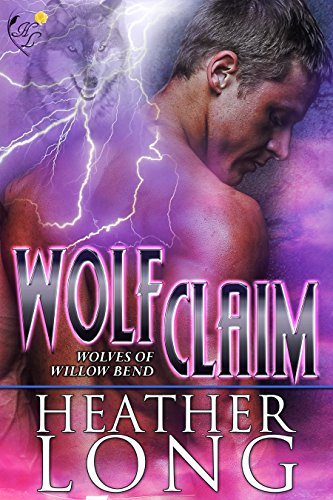 Gillian Whitford, darling of Willow Bend, brings out the protective instincts in all the dominants, but none more so than Owen Chase, the pack’s Hunter. A loner by nature and calling, Owen spends less time with his pack mates and more time on the borders of their land. Not even the change in the Alpha and the swearing of a new oath kept him around long.

Winds of change still drift through Willow Bend as they adjust to their new Alpha. When the Hudson River pack requests a fill-in healer to replace their own, Gillian, journeymen apprentice to their Pack healer, is the obvious choice to help. Owen forbids her to accept, but the sweet natured wolf rebukes his selfishness and volunteers anyway.

Risking a challenge, Owen faces off against his Alpha to appeal her decision and finds himself charged with her safety. Now, the loner will be escorting one of his pack’s most precious into foreign lands. He’s all that stands between her and a dozen potential threats…and if he doesn’t stake his claim, he may lose more than his heart.

In this book we get to travel to another pack. Alpha of the Hudson River Pack, Brett Dalton has requested the assistance of Willow Bend. Mason will only assist if the parties involved are okay with it.

The problem, wolves are dying, the latest death, their healer. Brett is requesting a healer to come help solve the mystery.

Willow Bend is unique in that they have two healers, Emma and Gillian. Gillian is young and unmated but is more than capable of handling anything she may find.

Now usually my favorite scenes involve the couple getting involved, but this one is between Owen and Brett. It had me giggling.

Maybe Dalton hadn’t gotten to know Mason all that well during the Willow Bend Alpha’s time as a Lone Wolf amongst his pack. Owen didn’t question or offer him a response. What went on between the Alphas went on between them. But Gillian was wrapping up and the boy began to wipe his face before standing. His Gillian wouldn’t abandon a child in need, nor a healer potential. She had the damndest habit of getting what she wanted.

“I think it’s only fair that we’re clear on one subject before she rejoins us.” Brett said, reminding Owen he still stood there.

“And that would be?”

“I have every intention of claiming that beautiful wolf if you don’t.”

With a jerk, Owen faced him. “Excuse me?”

“No,” Brett said, his expression unreadable. “I don’t think I will. She’s a fine wolf, perhaps the finest I’ve ever met, and I’ve known her less than a day. Consider yourself warned.”

Gillian trotted up in that moment and rubbed against Owen’s leg. He dropped his hand to stroke her head automatically. His gaze still locked with Brett’s, Owen didn’t disguise his rising wolf.

Alpha and confident, the other wolf didn’t flinch away. He’d made his desire plain and clear both wolf-to-wolf and man-to-man. He could want Gillian all he liked.

No way in hell would Owen let him have her.

With all the tension and the discovery of poison, this book quickly and relentlessly drew me in.

With Brett’s intentions clearly stated, I had to wonder what Owen would do, I knew what Gillian’s reaction would be.

Laughter, tears, twists and turns and so much more. I want more of Owen and Gillian and Brett too!