Dust to Stone
By
Wendi Brant

War veteran Aiden Monaghan lives with PTSD and his alert dog Butler on the remote Aran Islands off the coast of Ireland. He is coping until they find a woman who lay dying on the shore near his home. Flashbacks and nightmares spin Aiden’s carefully constructed life out of control. Most disturbing of all are the feelings he develops for McKenna. She brings emotions to the surface that he has tried to forget. But when her life is threatened, he is fighting much more than his past.

DUST TO STONE is a story of struggle and acceptance, of a man overcoming invisible obstacles and reaching for a new normal. It is also a story of love, of a woman who grabs his heart with both hands and doesn’t let go through the ups and downs.

Part of the proceeds from this book will be going to Triumphant Tails an organization run by a woman who shares a similar story to Aiden. She was in the military doing her thing, had a life altering experience and now trains dogs for people in need.

This book opens by giving us a birds-eye view of Aiden’s PTSD. His flashback, the actions of his service dog Butler and the discovery of the woman on the beach are exacting in details drawing you deep into the story.

The first time McKenna wakens it is for only a brief moment, she is scared and has no memory of what happened. Fortunately Frank the owner of the local hotel remembered her and brings her belongings to Aiden. He also mentions the other person she was with and that there is no sign of him.

This is a favorite scene when she wakes up fully.

“You’re recovering from hypothermia. Keep these on, okay?”

Instinct had her pushing them away, fear had her sitting up on the couch. Warm air caressed too much skin. She looked down, horrified to see that she was almost naked. McKenna grabbed the blankets with both hands and clutched them in front of her.

“What the hell?” Her voice sounded distant and abused, her throat painful. Her heart raced as she searched chaotic memories.

Where was she? The cozy cottage living room wasn’t familiar.

God, she had to get out of here.

“Hey, it’s okay. You’re safe.” His Irish accent was rich and calming. She wanted to believe him, but she didn’t know him, where she was, or why. It hurt to try to remember. The headache was relentless.

A nudge against her lap startled her. She looked down and saw the most beautiful German shepherd staring at her. He appeared completely harmless, despite his size. He nuzzled her elbow, and she hesitated before she rubbed its head. Her fingers moved methodically over the velvety fur of its ear. The panic in her chest lessened, and breathing became easier. She supposed a serial killer wouldn’t have such a sweet dog.

“His name is Butler.”

Butler tilted his head and pushed against her hand, trying to get closer. A small groan escaped from the black muzzle. McKenna chuckled and then winced. The man picked up a mug and offered it to her. “It’s herbal tea. I suspect your throat is sore.”

She ignored it. “Where am I?” Yeah, it was more than sore. It felt like someone had scraped the inside with 40-grit sandpaper.

She frowned and rubbed her forehead. “Inishmore?”

He nodded as he swirled the mug in his hand. “My name’s Aiden Monaghan.”

At least she didn’t have amnesia.

“Do you know what happened to you?”

There had been a photography assignment in Galway she’d covered earlier. She tried to focus her hazy memory, but she was so tired. The alarm that had been keeping her upright ebbed slowly away. Her muscles quivered in exhaustion as she pushed back her bangs. But when she traced over the tender skin on her neck, all the fog lifted and, suddenly, she knew.

“The ferry.” Oh fuck! She looked around the living room. “Where’s Darren?”

“They’re searching for him.”

McKenna remembered the hands around her throat choking the life out of her. Panic threatened again, but before she could relive the moment, she heard movement from another room.

“Aiden?” a gruff voice called out.

McKenna tensed. Holding the blankets tightly in one hand, she grabbed a tile coaster off the coffee table. She clenched the heavy object with trembling fingers and watched the open doorway to what she assumed was the kitchen.

The man beside her arched a brow as he glanced at the coaster. “Nobody’s going to hurt you.” A small smile creased his face. “Least of all Neilson. He’s all bark. No bite.”

His quick wink calmed her racing heart. Something about this Irishman’s bright blue eyes made her want to trust him. McKenna held his stare for a brief second before she turned and saw an old man shuffle into the room. Silver hair stuck out in all directions from underneath his cap. His size-too-small New England Patriots sweatshirt was tucked into a pair of size-too-big worn jeans, held up by a belt cinched tight. He appeared harmless. The only threat he posed was to the fashion industry.

“You finally woke up,” the man stated, his gnarled hand thrusting a wooden cane in her general direction. He made it sound like she had been caught sleeping on the job. McKenna tightened her grip on the heavy tile. The dog nudged her elbow at the same time Aiden covered her hand in his. She startled at both, torn between looking at Butler’s adorable face or Aiden’s handsome one.

“Neilson, I appreciate you stopping by, but why don’t you head on home?” Aiden’s body was tense, but his voice held more patience than firmness. He gently tugged the coaster out of her hand as he talked.

Neilson scowled before sputtering, “I’m not leaving you alone—”

“I’ll be alright.” Aiden got up and nudged the old man toward the door. “I’ll see you tomorrow, okay?”

“But what about my clam bucket?” she heard Neilson yell as the dark wood door shut.

McKenna watched Aiden for a moment before she closed her eyes and dropped her head.

“No,” she managed. She wanted to get up and find out what had happened to her. But all she was able to do was cradle her head in shaking hands, her stomach rolling. “Oh God.”
Brant, Wendi. Dust To Stone (Kindle Locations 286-324). Kindle Edition.

The interaction with Butler and the caring of Aiden touches the heart.

There is still a lot of questions to be answered, not the least of which is who attacked her and where is her assistant Darren.

This story is a journey for Aiden and McKenna, while the attraction is mutual, the journeys are different. Aiden has much to overcome yet, and McKenna is building her career. Yet the sparks fly and the drama and suspense soars even higher.

You won’t be able to put this book down. Bravo, Wendi! 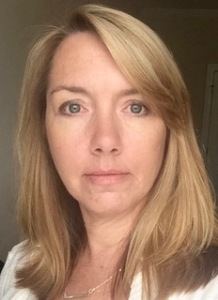 Wendi Brant is a southern girl, born and raised in Raleigh, NC. She’s married to her best friend and together they’ve raised two amazing young adults. She has a dog named Harris that takes Prozac to keep him happy and the family sane. Wendi hates to cook and would hire a chef if she could. She loves music of all kinds and can’t carry a tune, but still sings all the lyrics. And she loves to travel. In a couple years, her and her husband plan to sail around the world.

DUST TO STONE is her debut novel.

One thought on “A Debut Novel! Dust To Stone by Wendi Brant”