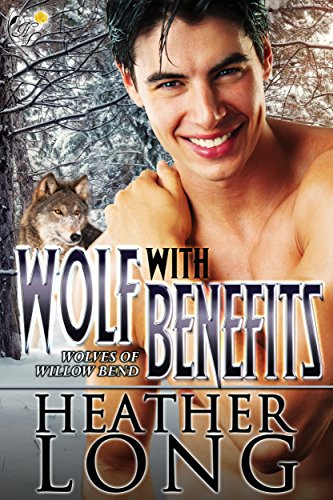 After graduating college and spending a summer breaking the law, Shiloh Sullivan needs to make amends and accomplish something for Willow Bend. When she returns home, her best friend—the wolfish and playful Matt Montgomery—distracts her. In an effort to make his mother feel better, Matt cons Shiloh into telling his mother that she came home for him. The little fib, he promises, is all his mother needs to feel better about his sister’s recent mating and exodus across the ocean. Pretending a relationship with a wolf is impossible and, while Shiloh might be human, she knows the rules…

The friendly-with-benefits arrangement suits Matt fine. It makes his mother happy, helps the pack forgive his best friend, and gives him a reason to pry into the secrets Shiloh’s been keeping. Still, the closer they get and the more rules they break, the more Matt’s wolf wants to change their con game into a mating game. Two problems stand in his way—Shiloh’s very human parents never wanted their children to take the bite, and a wolf from across the line has his eye on her, too. Can Matt keep his best friend and mate her too?

Previously released in the Romancing the Wolf anthology.

There are quite a few novellas in this series and this is one of my favorites.

Shiloh was one of the humans that helped Luciana move the wolves to form the sixth pack. She was the first one to return when Mason ordered them home. Not because of the order but because she didn’t like what she saw with Patrick challenging Serafina the Delta Crescent Alpha.

Now many are not happy with her being home, wolf and human. The most prominent of those humans, her family.

This is a favorite scene after her tires are slashed at the grocery store.

The wolf pivoted once, facing the coffee shop, and Matt twisted to follow his gaze. Shiloh had her back to the glass, but Tiffany— Ryan’s mate— lifted a hand to wave at them. Her whole countenance blossomed into a warm smile. The look, though reserved for her mate, transformed her from a lovely woman to a stunning one. One he had no business staring at, so he glanced at Shi. Her whole posture seemed slumped, her shoulders dropped, and she had an elbow on the table, chin pressed against her fist.

His best friend was hurting. It pissed him off.

Returning his attention to the vehicle, he found Ryan and Phillip staring at him. The leaden weight of their regard brought his wolf to attention. “I can take care of getting her tires changed. Should I make a point of guarding her? Or will you be sending someone?” No matter how docile he tried to keep his tone, he couldn’t quite bury the growl beneath the words. Someone inflicted harm on Shi— in their pack. Unacceptable on every level.

“She’s not your problem,” Ryan began, but Matt raised his hand in a request to continue before the attorney cut him off. Pausing, Ryan raised his brows.

“She came home for me.” Or at least that was what he planned to tell his mother. “She’s my best friend… she means the world to me. It would be my privilege to look after her.”

“Fine. Keep an eye on her. We knew some wouldn’t be happy with their return, but there’s still no excuse for vandalism.” Ryan motioned to Phillip. “We’ll take care of alerting Mason. Are Virgil and Tyler picking up the cars?”

Chase nodded once. “They’ll be here shortly. Not much else we can do in the meantime. I’ll check with the shop owners and others in the area, but unless someone admits to seeing something…” Wolves could play oblivious as well as anyone.

It was cold, and it had been snowing on and off. Chances were high no one had seen anything, anyway.

“I’ll make sure Shi gets home.” Though he had every intention of walking across the street to fetch her, he stayed where he was until excused. He’d engaged the more dominant wolves— both senior members of the pack. He knew better than risking rudeness.

“Go ahead,” Ryan said, withdrawing his phone from his pocket. Permission granted, he jogged across the street to the coffee shop. The rich scent of beans, sugar, and milk perfumed the warmer air inside. Shi glanced over at the sound of the bell, and the tired look in her eyes kicked him in the gut. If he did nothing else, he planned to erase the hurt in her gaze and restore the sassy pistol who insulted him regularly.

“Mrs. Huston.” He nodded to Tiffany, then focused on Shiloh. “Pita.”

The hurt in her eyes disintegrated in favor of a flash of temper. “Pita? Really? That’s what you come to me with, dog breath?”

Tiffany chuckled and Matt smiled. Dog breath. Much better. “I love you, too Pita.” Winking, he pulled out his wallet and claimed their check from the table. “Let me pay for this, then we can grab your groceries. I’ll take you home to deliver them, and you can pick up your bags.”

He didn’t wait for her response on his way to the counter.

Shi was right behind him as he peeled off a twenty to pass over to Daisy, the wolf behind the register. Her flirtatious smile froze at the first sight of Shi. Slinging an arm around his best friend, he pulled her close and dropped a kiss on the tip of her nose. “Don’t worry about anything, Shi. I got this.”

Her mouth opened, but no words came out.

Wow. Kissing Shi shut her up. Grinning wider, he eyed Daisy who looked from him to Shi then back again. Put it together, little gossip. I know you can. Her frown eased and a hint of a smile tugged at her lips. That’s it. Assume Shi is mine. Tightening his arm around Shi, he kept her from breaking free. “Thanks,” he told Daisy as she handed him the change. “Do you have your jacket, Shi?”

“Yeah, it’s over… there.” Heh. She found her voice as she waved her hand toward the table she’d shared with Tiffany.

Now Matt has moved her into his home and she has some decisions to make. He is sort of claiming her as his mate, not realizing it may very well be true.

Lots of family drama in this one, Shiloh’s family has some issues with her relationship with Matt.

Plenty of laughs, some tension and of course that whole family thing. I love the way Heather tells the story.