Their love never died, but her secrets could break his trust beyond repair.

After six years and too much self-recrimination, rancher Mitch Landry is ready to admit he was wrong. He’d loved Olivia Montgomery but commitment wasn’t high on his list back then. That was his first mistake. He’s just divorced his second, and he’s set to do whatever it takes to convince Olivia to give him another try.

Through hard work, determination and more than a few tears, Olivia survived the break-up with Mitch. She’s rebuilt her life around her business and the son she loves more than life itself. She’s not proud of the mistakes she’s made—particularly the secrets she’s kept—but when life hands you manure, you use it to make something better of yourself…lest you get stuck in it.

At a hot, muggy Dallas wedding, they reconnect. Olivia’s first instinct is to play it cool, but after one devastating kiss things flare out of control, real fast. Maybe a quick roll in the hay will get him out of her system once and for all. Funny thing about hay though, once it’s tangled in your hair, getting it out risks revealing things that were never meant to see the light of day.

This Book is Free
At These Vendors!

Olivia wanted to be anywhere but at the airport picking up Mitch. However, Emily the bride-to-be was very persuasive. Mitch was as attractive as she remembered but he is a temptation she doesn’t need.

Mitch has grown up a lot since he broke up with Olivia, his divorce was the crowning moment of his biggest mistake. He’s hoping to reconnect with Olivia and maybe take things where they belong.

This is a favorite scene on the ride from airport.

Pointing a remote, she popped the trunk of a black Mercedes Benz.

Mitch tossed in his bags as well as the one she carried. “A Benz, huh?” His gaze raked over the car. “Business must be good. Congrats.”

“Thanks.” Oven-degree heat rolled from the car when she opened the door. After waiting a minute to let out as much hot air as possible, she slid onto the toasty leather of the driver’s seat. “But this isn’t mine.” She started the car then lowered the temperature controls on the air conditioning. “Belongs to one of the trainers at the gym. My car was blocked in and Mark loaned me his.”

Mitch tossed his hat onto the back seat before sliding into the passenger side. He looked around and whistled. “Nice ride.”

“Yep. Nice guy too.” Moments later, she paid the toll at the south exit and turned east onto Highway 183. “Emily said to drop you at Grayson Mansion. Do you need to stop anywhere first?”

To her relief, he chuckled at her joke. The deep sound vibrated around the car and straight into her heart.

“Nope. Got everything I’ll need this weekend.” He cleared his throat and angled his body toward her. “So Livie, are you really happy living here in the big D? Don’t you miss the ranch life? The riding? The early morning chores? The nosy small-town gossip?”

Her fingers tightened around the steering wheel and she kept her gaze glued on the traffic ahead. Every glance at him produced a sucker punch to her gut, and she didn’t want him to know how much seeing him physically pained her. “I’m as happy here as much as anywhere, I guess. My business does well. I have friends, so…” She shrugged, pulling the car’s shoulder strap tight across her chest.

“How’s the Lazy L doing?” she asked, referring to his family’s cattle ranch.

“Actually, pretty damn good. Had some bad years with drought and some freaky winter weather, but we kept her going. Now if beef prices would just get back up.”

The pride and enthusiasm in his voice left no doubt how much he loved being part of the family cattle business. With him way down in south Texas and her in Dallas, a big spread of Texas geography separated them.

“Glad it’s working out then.”

She looked at the back of his head as he stared out the side window, seeming to study the landscape as it whizzed by. The ends of his hair were distinctly lighter than the roots, visible now that he’d removed his hat. She suspected his hair had been lightened and his skin tanned from the daily sun exposure of working on his ranch. She’d seen him wear a cowboy hat so many times, and she could picture him on his horse, his hat saturated with sweat, the ends of his long hair soaking up the sun’s rays as he rode behind the cattle. Now that she thought about it, she couldn’t remember ever seeing his hair this long. He’d once told her he always kept his hair short to make the south Texas heat bearable. And while she liked his new look, she had to admit she missed the old one.

“Haven’t had time to keep up with the old crowd. You never did get married, right?” His gravelly voice jerked her mind from reminiscing.

“Wrong. I did.” His question surprised her, but if the shock on his face was any indication, her answer was an obvious bombshell. Her gaze snapped back to the road.

She shook her head while saying, “I don’t know. It wasn’t a state secret or anything.”

“So you’re not Olivia Montgomery?”

“Of course I’m Olivia Montgomery. I just added Gentry to the end. I married Drake Gentry. I don’t think you ever knew him.”

“I didn’t. Will he be here this weekend?”

He gave her left hand a pointed stare. “Are you still married?”

She shook her head. “Divorced.” A pang of regret settled around her heart, regret about hurting Drake, a wonderful man who’d been her rock when she’d needed stability the most. He’d been there for her and she’d let him down so many times in so many ways.

“Hmm? What does that mean?” She glanced toward him, wondering why his opinion was suddenly so important. At almost thirty, she ran her own business while raising a wonderful son single handedly. Why did Mitch’s opinion still mean so much to her?

His fingers drummed on the arm console between them. “I’m just surprised. Your marriage caught me off-guard.”

“So I gathered. Why? Did you think no one would marry little old me?” she asked, lifting one eyebrow in a challenge.

He chuckled and placed his forearm on the back of her seat, letting his elbow dangle in the opening between the seats.

His deep-throated chuckle reverberated through her again. The muscles in her jaw clenched at the zap of energy tingling through every nerve.

“Don’t be a goose.” He tapped a knuckle on the side of her head. “Any man would be fortunate to have you as a wife and a fool to give you up. I…I’m just surprised no one told me, especially my mother. They talk, you know? My mother and yours.”

In spite of a very sensuous and sizzling reunion, Olivia walks away. She has a really big secret, one she has sworn many people to silence. This secret can make or break these new feelings she has for Mitch.

Mitch knows she’s hiding something, and he’s wondering who is this mysterious Adam.  He rushes to be with her when she’s taken to the hospital after a fall leaving the wedding reception.

His reaction is priceless when he realizes just who Adam is, and there are so many conflicting emotions.

Olivia has a lot of explaining to do as Mitch pushes to have both her and Adam, join him on his ranch for her recovery.

A conniving ex-wife adds to the already rampant drama as this story unfolds.

You’d think they’d understand that communication is key, but so many secrets for so many years make that difficult.

I am going back to read the prequel now. Then I will continue with this series. 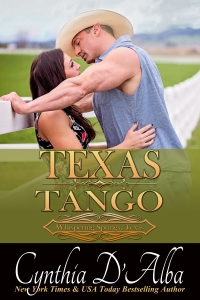 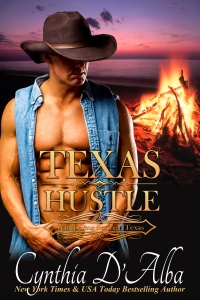 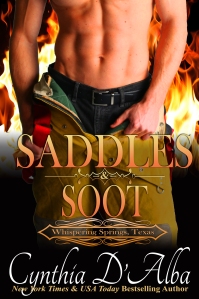 Hi Y’All! I’m Cynthia D’Alba from Arkansas.Here’s a little about me…New York Times and USA Today Bestselling author Cynthia D’Alba started writing on a challenge from her husband in 2006 and discovered having imaginary sex with lots of hunky men was fun.She was born and raised in a small Arkansas town. After being gone for a number of years, she’s thrilled to be making her home back in Arkansas living in a vine-covered cottage on the banks of an eight-thousand acre lake. When she’s not reading or writing or plotting, she’s doorman for her two dogs, cook, housekeeper and chief bottle washer for her husband and slave to a noisy, messy parrot. She loves to chat online with friends and fans.