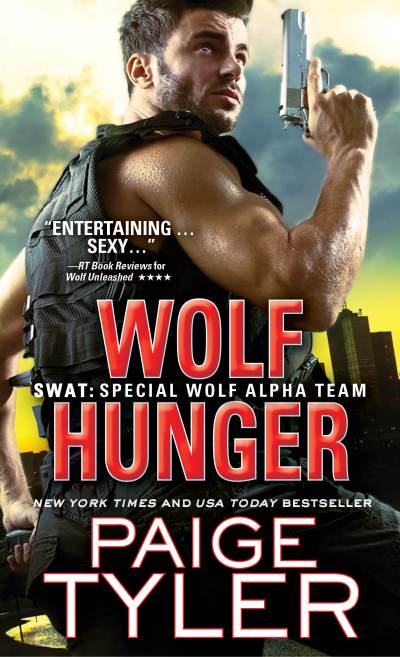 SHE’S ALL THE WOLF HE’LL EVER NEED…

When SWAT Officer Max Lowry meets Lana Mason, he falls fast and hard. He’s positive she’s The One. And Max’s favorite part? Lana’s a wolf shifter too, so they can skip the awkward reveal and head straight to the happily ever after. There’s just one problem: Lana doesn’t know that she’s a werewolf.

To make matters worse, hunters with intent to kill have tracked Lana to Dallas. Max has to figure out how to keep Lana safe, show her who and what she really is—and just how much she means to him.

I think this is my favorite in this series so far. At an awards ceremony Max follows a scent, like them but not. It leads him to a beautiful woman, who it turns out is Deputy Chief Hal Mason’s daughter and he is not pleased.

This is a favorite scene after Max and Lana sneak out from the reception to get pizza.

“I’m glad we had a chance to go out,” Max said when they reached the porch. “I had an amazing night, and I’m not just talking about the pizza, though that was pretty outstanding, too.”

Lana turned to face him, moving a little closer for warmth against the chilly November air. Not that she was cold. In fact, she rarely ever got cold. But she didn’t mind sharing some of his body heat since he seemed to have so much of it. The cold didn’t seem to bother him, either. He had his jacket hanging open.

“I had a good time, too.” She smiled up at him. “Maybe we can do it again sometime?”

Lana tried her best to not appear too overeager. She didn’t want Max to think she was desperate. Although she was eager to see him again, she couldn’t let him know that. A woman had to play it cool.

“How about tomorrow night?” he asked, his grin suggesting he knew exactly what she was up to. “If you’re not doing anything else?”

Lana didn’t even bother playing silly games anymore. Laughing, she went up on tiptoe and hooked her arms around his neck. “I’m completely free tomorrow night. What do you have in mind?”

Max wrapped his arms around her, tugging her even closer than she already was and snuggling her up against his chest nice and tight. Wow. She already knew that Max was well built, but leaning up against him like this confirmed that she’d underestimated just how fit he was. He had some serious Adonis-like muscles going on under that shirt.

Max slipped his hands under her jacket and settled them comfortably on her lower back. The move was so natural and nonchalant, she might not have noticed it if it wasn’t for the crazy tingles of arousal that wiggled through her body simply at his touch.

“We could go to a club and do some dancing,” he suggested, so close now that she could feel his warm breath on her face. “Or we could have dinner at one of those dine-in movie theaters.”

She was so distracted by knowing Max was about to kiss her that it took a supreme effort of will to even think about what he’d just said. The idea of the dine-in movie sounded cool. She’d seen theaters like that before but had never gone to one. As fun as that would almost certainly be, the thought of getting Max out on a dance floor sounded even better. She’d have a chance to let her hands roam all over his amazing body and not even have to feel guilty about it.

“I’d love to go dancing. I didn’t get a chance to do much of it in school. I need to catch up,” she said, tipping her head back a little more and sending the clearest signal possible that she was ready and waiting for a kiss.

He flashed her that mischievous smile, his lips grazing the curve of her jaw in the most delightful way. “Dancing it is. I’ll pick you up tomorrow around seven and we can get something to eat first.”

She turned her head to the side in an attempt to capture his mouth. He let his warm lips briefly touch hers before gliding away to tease one of her earlobes. She groaned in frustration, which only earned her a chuckle from Max.

Deciding she’d had enough teasing, she slipped one hand up to weave her fingers into Max’s short, spiky hair and got a good grip. Then she turned his face to hers and gave him a pointed look. He got the idea.

Yanking her tightly to him, he covered her mouth with his. She opened hers, letting his tongue in with a groan of pleasure this time. Mmm, he tasted good.

She tightened her hand in Max’s hair, urging him on, wanting more. He slid his hands down her back, resting them on the top of her jean-clad ass, sparking lightning through her body.

Lana didn’t know what came over her. Since this was a first date, she’d intended to give him a good-night kiss to thank him for a wonderful evening, but she could barely breathe she was getting so excited. As if it had a mind of its own, her free hand ran up and down Max’s strong chest, her fingernails digging into the material of his shirt to trace every bulge and ripple of the heavy muscles underneath. Her body immediately responded, heating up faster than it ever had in her life.

Then she felt his hard-on pressing into her quivering stomach and knew he was as turned on as she was. That knowledge fired her imagination, and ideas of slipping up to her old bedroom without her parents knowing, or even back out to Max’s Camaro, flooded her mind with scenes that she’d never had about any guy she’d ever dated—first date or beyond.

She was close to stripping his clothes off right there on the front porch when the door suddenly jerked open. Startled, she jerked her mouth away from Max’s.

“Lana,” her father said in that flat, emotionless tone he used when he was angry. “I didn’t realize you were going out this evening.”

She looked up at Max to find his face turned toward the street, his eyes closed and his mouth set in a tense line. Though whether he was doing it to keep from cursing at her dad or laughing at him, she had no idea.
Tyler, Paige. Wolf Hunger (SWAT Book 7) (pp. 55-58). Sourcebooks. Kindle Edition.

What Lana didn’t seem to know was that she was a werewolf and when circumstances force Max to shift and then tell her what she is the information wasn’t received well.

I really loved the way this story evolved, so much intrigue and the relationship that couldn’t be held at bay with Lana and Max.

Fast paced action with hunters searching for wolves. Revelations about what Deputy Chief Mason knows, an interesting conversation with Coletti from IA, and more about the psychologist Delacroix. 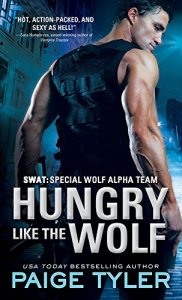 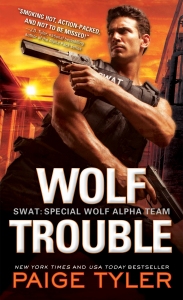 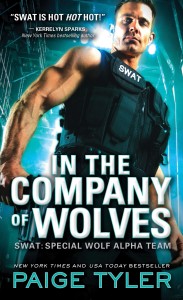 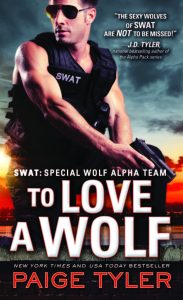 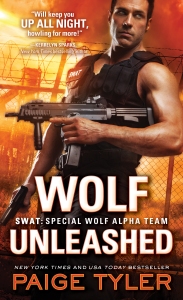 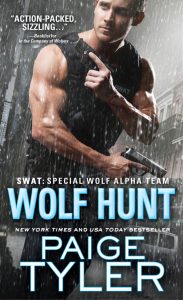 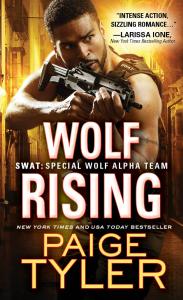 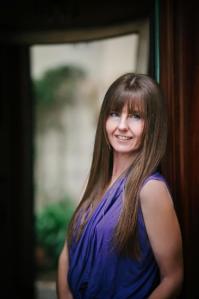 Paige is a New York Times and USA Today bestselling author of sexy romantic suspense and paranormal romance. She graduated from The University of West Florida with a degree in education in 2000, but decided to pursue a full-time career as a writer in 2004. Since then, she’s written over fifty books in several genres, including paranormal, contemporary, western, sci-fi and erotica. She loves writing about strong, sexy, alpha males and the feisty,independent women who fall for them. From verbal foreplay to sexual heat, her stories of romance, adventure, suspense, passion and true love will leave you breathlessly panting for more.