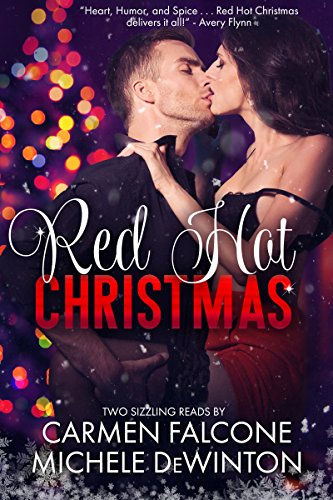 This Christmas, get ready to be nice… and naughty.

All Gabby Phillips wants is a Christmas without drama. Fat chance. Not when the new owner of her department store is tall, dark and dangerous, Nicolas Morganti, the man she ran out on. The same man her father stole half a million dollars from and the man her body still craves in the deepest hours of the night. Now she has to keep her cool, and her biggest secret – because if he finds out he has a son, he might just take the last scrap of Christmas spirit she’s got left.

Nicolas Morganti always gets what he wants. This Christmas that includes his competitor’s huge department store chain. But when he’s told money is missing and that Gabrielle Phillips works there, it doesn’t take him long to point the finger. Nobody’s ever run out on him before, and the way Gabby left was colder than a snow storm. Now it’s time to settle the score. Revenge can be gift wrapped, right?

When Nick Morganti acquires the Department store chain she works for Gabrielle Phillips is scared. Scared she’ll lose her job and scared she’ll lose her son. Still paying off her father’s debt and faced with increased payments she finds herself on the verge of homelessness without a babysitter.

Nick Morganti has vengeance on his mind. Gabrielle’s father stole from him and he was sure she was the mastermind behind it all when she disappeared from his life five years ago. Now she’s his employee and he discovers he still has feelings for her. Feelings that aren’t part of revenge.

This is a favorite scene after the department head meeting. A look a how confused Nick and Gabby are going to get.

“I know about Fraser. His wife obviously knows about you too and has made him beg off Friday drinks because of it. Poor bastard. What were you trying to get out of him? He doesn’t strike me as someone of influence.”

Her forehead, usually smooth and untroubled, creased like old parchment paper. “You’ve spoken to him?”

“Of course. You didn’t think I’d get to where I am without being able to sense when sexual tension is clouding an employee’s judgment.”

She stared at him. “When did you speak to him?”

“Just now. In the boardroom.”

Her face collapsed in on itself and she laughed. Laughed!

It was Nicolas’s turn to stare. And as he did she pulled at her bottom lip, her eyes glinting at him, inviting him? Promising….? Not letting himself think too hard, he covered her mouth with his. The shock registered in her eyes but as if he’d flicked a switch, suddenly Gabrielle was kissing him back, softening, her body pressed to his chest.

Damn she felt good. Better than good. Despite the huge differences in their height they’d always fit well together, her tiny frame cradled in his broad one. Pushing his hands into her hair, Nicolas wanted to pull her head back, to lay his teeth on her neck, to open her shirt and take what was rightfully his.

Stop it. Nicolas pulled his mouth away but didn’t release her. He didn’t usually do self-flagellation, certainly not over something as small as a kiss, but this hadn’t been part of the plan. Yet as Gabrielle stood looking up at him, he could hardly stop himself wanting to take her right there and then on her desk. Not now. Not ever again. Drawing on every ounce of control he owned, Nicolas calmed his mind and focused on what he was here to do, not on the formidable desire and forbidden tenderness Gabrielle still elicited from him. But you stopped. You’re in control.

“Was that to prove you’re more man than Fraser Kilpatrick? No one doubts you, don’t worry. You’ve got the girls here in a flutter. Although they obviously don’t know what you’re really like. I could make a complaint. That was pretty close to sexual harassment.”

A smile returned to her lips. “Don’t worry, I know it’s not worth it. And anyway it’s almost sweet. You think I had an affair with Fraser Kilpatrick? I would never. That’s too much.”

Nicolas was surprised that he felt relieved. Then he realized she hadn’t denied being involved with someone else called Fraser. “Who else would I be talking about?”

Turning her face away from him he watched her shoulders still. When she turned back, her confusion, mirth, every expression he’d just witnessed was gone. “So I have a boyfriend called Fraser. So what? I’m not a cheat or a home wrecker.”

Nothing about being a fraudster. Well they both knew the truth of that; no point going into it again now. She pulled at her bottom lip and Nicolas couldn’t help his gaze going back to it. How did she do it? Get under his skin like that.
Falcone, Carmen; de Winton, Michele. Red Hot Christmas (Kindle Locations 446-471). . Kindle Edition.

From here it just gets better and better. Someone is pilfering money and pointing it to Gabby’s department. Now she has to prove she’s innocent all over again and the realization that she still loves the man can only hurt more.

A page turning delight as Nick finds out more about Gabby and her life since him. But there is one more secret. One that will make or break this relationship.

After doing time for a crime she didn’t commit, paramedic nurse Sydney Bell avoids trouble at all costs. Yet, trouble comes knocking on her door when a dying patient begs her to deliver a mysterious message to hunky Argentine investor Alejandro Soto.

Alejandro needs to publish the one book that will help restore his image and aid his uncle’s political campaign. It’s full steam ahead until a feisty redheaded woman storms into his office and offers a clue to his biographer’s death. He’s skeptical about Sydney, and laughs it off but after she’s attacked, Alejandro realizes he has no choice but to protect her, whether she likes it or not. He can’t have another death on his conscience.

A crazy attraction threatens to make Sydney surrender to her Argentine savior, but will she be ready for the Christmas scandals that will rock them along the way?

When auto-biographer Frank Lewis is shot he whispers a cryptic message to the paramedic caring for him on route to the hospital. Sydney Bell’s life changes with those few words.

Alejandro Soto has no idea how much his privileged life is about to change when a feisty redhead barges past his assistant into his office. Having just learned of his auto-biographer’s death he wasn’t sure how much weight the woman’s words carried. That is until she gets an email from her job informing her of her partner’s death.

He knows he has to keep her safe at least until they find who killed Frank and possibly her partner. This is a favorite scene when Alejandro follows her concerned for her well-being.

“Sydney. You just left my office. Alejandro Soto,” said the voice on the other end, and her skin prickled as if it’d been stroked with a feather. After the way he pronounced her name, the man didn’t need to identify himself. That wasn’t an accent one heard every day, was it?His South American drawl was cultured, engaging, deep.

“I told you everything I know,” she said, then cleared her throat trying to sound more composed. “How did you find out where I live?” she asked, and a chill skated down her spine. This was not a good thing. The last thing she needed was a stalker— even if he had the sexiest lips she laid her eyes on. Even if in person he was ten times yummier than on her screen— and all the more dangerous. Damn it, Sydney. Hadn’t life taught her a lesson? Men like him would always have leverage over her. They could put her away, behind bars, for things she wasn’t guilty of.

“Remember you had to show your driver’s license and give them your contact information to get through security?”

Oh shit. Yeah. She had almost given them a fake address. Old habits died hard. But they asked to see her picture ID before issuing her a visitor’s badge, and she ended up being honest. “Okay, Sherlock. You got me.” She shuffled from foot to foot. “Why are you here?”

“You stormed out of my office. I was worried about you.” A sigh. “You just lost someone.”

“Thanks, but I’ll be okay. You don’t need to hand me tissues or anything,” she said, having a hard time picturing that ginormous man doing something so delicate. When he had grasped her in his office earlier, his large hands had caused an inside shiver. A man’s touch was not that familiar to her, and especially not that man’s. Imposing. Mysterious. And uncomfortably handsome.

Like she was going to let a complete stranger into her apartment. She heard his long intake of breath from the other end of the line, and assumed he waited for her response. She bent over the kitchen sink, the wariness of the day taking a toll on her. Until this second, she had thought her heart was problem-free. Empty. Just the way it should be. Somehow, somewhere her friend had occupied a part of it— tiny enough to go unnoticed when she was alive, and big enough to increase the void now that she was gone.

Patty. Words got trapped in her throat.

A creak on the run-down laminate flooring made Sydney straighten her shoulders. Melted ice flowed through her veins.

After hiring a private detective they two of them head to Argentina to Alejandro’s mother’s home for Christmas.

From this point on everything is fraught with secrets. Everything but the growing attraction between them. They divulge to each other just about everything and once they hit the bedroom, well sparks fly.

A page turner that will keep you guessing until the very end.

I’ve been known to be an all round arty type so it’s no wonder my first romance has a little sparkle of the stage tucked into its pages. Being a writer was not was I was supposed to be when I ‘grew up’ but then neither was being a dancer. Sometimes my performing past jumps into of the dress up box and requires attention. But most of the time I’m content to stay in my PJs. All day. And I also thinks that chocolate can solve pretty much everything.