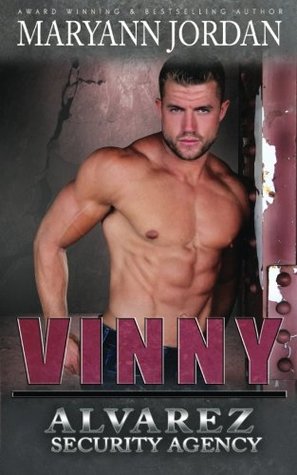 Vinny Malloy, dedicated to his brothers while working for Alvarez Security, loved life the way he loved his music…loud, hard, and fast. When his friends and twin brother settled down, he continued to be devoted to his easy weekend conquests…until his next mission and he discovered that opposites can attract.

Annalissa O’Brian, a shy harpist with the Richland Symphonic Orchestra was constantly being told where to perform, regardless of her desire to teach music. When her father hired Alvarez Security to escort her from a LA concert, she had no idea how liberating that decision would be…until she met Vinny.

When drugs are found hidden in her luggage, Vinny and Annalissa begin a cross-country escape, staying one step ahead of the drug dealers that are after her and falling for each other along the way. Vinny had to prove to himself that he was worthy of the innocent harpist while keeping her alive at the same time. His love gave her the strength to stand on her own. Her music gave him the healing peace that had been missing.

Every one of the men of Alvarez Security have gone through something that has made them turn away from the possibility of love. Vinny is no different and for his new assignment Tony has kept him mostly in the dark. He couldn’t figure out why until he arrives where he is to meet up with her.

Not a rock venue, a symphony hall. On stage a woman playing a harp, catches his attention, the music hauntingly beautiful, bringing memories best left buried, although freeing at the same time.

I fell in love with Vinny from the moment he meets with Annalissa and saves her from a panic attack.

Annalissa O’Brian was being pushed along with the crowd as usual. She hated being bounced around and wished for the umpteenth time that she were taller…or bigger. Then I’d push back, she thought. Todd Levine, her manager, on one side and Gordon Fisher, her agent, on the other. Both talking to her at the same time, trying to move her through the crowd toward her room.

Finally bursting through the door, she was propelled forward.

“You were fabulous, darling,” Todd was saying. “I told you this concert would take you places.”

“Todd, I don’t care about going pla—” she tried to interject.

“Of course you do,” Gordon interrupted. “Todd, we need to talk tomorrow to see what we can get set up next.”

“I’m thinking a trip to Chicago, then possibly Dallas. See what you can get worked up.”

“Annalissa, what a show. Honey, you look marvelous and your playing? Oh my God, I absolutely cried,” came the voice of her hair stylist, Parker, behind her.

Sharon barged into the room, grabbing the cosmetic bag. “I knew your makeup would hold up under those hot lights. I’m telling you, I know my shit.”

“Gordon, I want you to check on the Hall in New York. See what they have next year,” Todd’s voice cut over the cacophony of others.

“Sirs, are you ready to allow any of the VIPs to have entrance to Ms. O’Brian?”

The room grew small and Annalissa could feel the noose tightening around her neck. Closing her eyes, she tried to block out the sounds, but could feel her breath coming in spurts. Everyone was speaking at once and she could feel the panic rising. Please, not now. Don’t let me fall apart now. She had suffered from panic attacks for years, but only in unfamiliar crowds—never on the stage. Her father considered it a sign of weakness and she had tried to hide them for years.

Numerous hands came forward, all connected to voices clawing for her attention. Until one clear voice in the crowd spoke out.

“Quiet!” came the bark from…her eyes widened as she looked to see who had managed to shut everyone up. Her gaze landed on him. She had no idea who he was, but he looked like a god. Tall, muscular, with the bottom of a Celtic tattoo showing below the arm of his t-shirt. The only man in the room not dressed for a symphony concert and yet the only man in the room that appeared to be completely at ease with himself.

Blinking back the tears as they threatened to fall, she watched as the crowd parted instantly for him as he stalked over. Stopping directly in front of her, she leaned her head way back to hold his gaze. He bent down to whisper, “Breathe, darlin’.”

Gasping in air, she realized that she had indeed been holding her breath. He took her hand in his much larger one, bringing it to his lips. A barely there kiss was placed on the back of her fingers and then he said, “Ms. O’Brian? It’s my honor to meet you. I’m Vincent. Vinny Malloy. And I’ll be your security escort back to Richmond.”

The room had grown strangely quiet, but before chaos could once again ensue, Vinny’s voice carried out. “I’ve just met Ms. O’Brian, but it’s obvious to me that she’s exhausted. As of this moment, she’s under my care and my protection. I and I alone will determine who may be let in to see her and when we will leave.”

Annalissa’s eyes darted around quickly, awaiting the uproar that was sure to follow. Todd’s mouth hung open while Gordon’s face grew red and his eyes narrowed. But she noticed he did not argue with the large man still holding her hand. Still holding my hand? Pulling her fingers out of his soft grip, she immediately felt regret at the loss of his touch.

Suddenly remembering the reason her father wanted to hire a security escort, she glanced around quickly, “Where’s Easnadh?”

Todd immediately answered, “The stage crew is bringing it here.”

Visible relaxing, she turned her eyes once more to the man still standing a few inches away from her, a questioning look in his eyes.
Jordan, Maryann. Vinny: Alvarez Security Series (pp. 18-20). Kindle Edition.

Much to the dismay of her manager and agent, Vinny completely takes over where Annalissa is concerned. However the real action doesn’t begin until their flight gets diverted because of an illness.

It’s at the hotel where Annalissa checks on Easnadh that she discovers drugs had been concealed in her harp.

A major change in plans, as they drive instead of fly with Vinny falling deeper with every mile.

I think this is my favorite book in this series so far. Lots of action, lots of emotion and just enough heat. 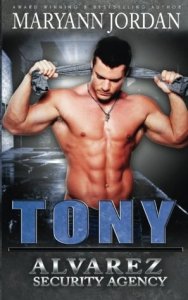