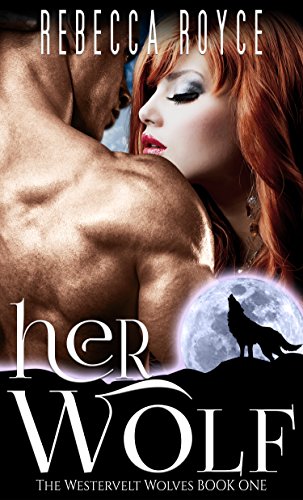 *This book has been previously published, the author received her rights back, and is now republishing the book*

Ashlee Morrison has a secret obsession—with a dark and mysterious male. The only problem is that he’s a wolf and she’s becoming convinced that she’s insane. But Ashlee’s wolf is no ordinary canine; he is Tristan Kane, third son in the royal family of the Westervelt Wolf pack.

Trapped in his wolf form by his evil father’s men, Tristan has desperately sought a way out of predicament and is shocked to find that the sad but beautiful redhead who has come to the wolf cage can not only hear him, but awakens in him the knowledge that she is his mate, the other half of his soul.

Ashlee, unaware that she is half wolf-shifter, agrees to accompany Tristan back to his pack in Maine to seek answers to her past and understand her future. But as Tristan and Ashlee grow closer, familial betrayals will threaten to destroy the fragile love they have started to build.

With the odds stacked against them, Ashlee and Tristan will either embrace their love to save the Westervelt Wolves or be lost forever to despair.

Tristan has been trapped in his wolf form and now he’s stuck in a zoo. If his father’s henchmen find him, he’s dead. He needs to get back to his family.Ashlee volunteers at the zoo as a form of therapy. She was devastated by the way her engagement ended and they seem to agree she has a form of PTSD. She always finds herself watching the wolves but from a distance.

This is a favorite scene when she ‘meets’ Tristan.

Ashlee shrugged and let the memories fade. She walked to the gate of the wolf pen and stared in. Usually, she didn’t get close to the animal cages; it felt invasive to do so and sometimes she would swear it felt like she was personally trapped in the cage. The animals spent all day with people pushed up against their enclosures pointing and staring. She preferred to give them some space. She blinked and squinted. The lone wolf had red fur in its coat. Why hadn’t she noticed that before? Because she hadn’t been able to focus on anything before and she was going out of her way to not spend too much time focused on the lone wolf.

Ashlee smiled, and the wolf raised its eyes to look at her. She blushed, which made her feel ridiculous. He was a wolf, for God’s sake, but his eyes looked so human, so compassionate. That compassion drew her in. She leaned closer to the cage. She snorted. For the last ten minutes, she’d done nothing but personify animals. Talk about desperate. Maybe it was time to go back to school.

“Can’t be fun for you to be so alone in there. Maybe you would have been happier with a different pack.” She’d just broken her cardinal rule and spoken to the animal. She closed her eyes at the slip-up.

Ha! Not this pack, that’s for sure. My family actually walks on two legs some of the time. I’d love to take you to meet them. I bet if I got you there, you might actually smile. I hate that half-grimace thing you seem so fond of.

Ashlee jumped back from the enclosure, so startled she fell on her behind. Had the wolf just talked to her in her mind or had her hallucinations gotten worse? She stood and looked around her. Her cheeks burned. No patrons or other volunteers were about to see to see her act like a lunatic, which was fortuitous or she’d soon be fired from her volunteer position.

She cleared her throat and looked around again. No one nearby, just the trees with their colored leaves, the wind, and the wolves. Her butt hurt from her earlier fall. She narrowed her eyes to stare at the wolf. “Did you say something?” She groaned. Why was she playing into this? You don’t talk to figments of your imagination.

Did you hear me, little one?

The wolf’s ears perked up, and he stood up on all fours to walk towards the side of the enclosure she pressed against. Is it possible you have been here with me all this time and you can actually hear me? Why have you not answered me before?

She should put a stop to this right now and walk away. But, she didn’t. Her feet felt glued to where they stood on the ground. She felt a light wind pick up and blow her hair off her shoulders. Not knowing what else to do, she swallowed the nervous bile that had formed in her throat. “I don’t know how I hear you, but yes, I can. Unless I’ve cracked up, which is most likely what’s going on here. That’s why I don’t answer you. I don’t want to be crazy anymore.”

Crazy? You haven’t cracked up. Perhaps I have. Her wolf sniffed the air and walked closer. He howled and Ashlee took a step backwards. That smell. Your scent. I know it. You never get close enough to let me smell you. The spell, it must have limited my other powers. My sense of smell is worse than some humans. Could it be?

Ashlee’s heart pounded in her chest. “Wow, we’re really having a conversation, aren’t we?”

She looked around again to be sure that no one approached. “What does that mean?”

How could you be here so often, for so long, and I did not know? I will kill Rex and any others who inflicted this intolerable state upon me.

Kill? Ashlee’s pulse sped up. Her palms grew sweaty and she wiped them on her pants. “I’m sorry, I’ve got to go.”

No, no little one, you cannot leave me in this pen. You must get me out and return with me to my home where my pack can restore me. I need to tell my family about the one who has betrayed us.

“Get you out of the cage? Are you nuts? See, I knew it was just a matter of time before my delusions wanted me to do something that was against the law. No. I’m in charge of my own mind. I get to say what I will and won’t do.

This whole thing goes so far beyond the realm of normal I can’t even see the border anymore. I can’t get you out of the cage. I can’t let a wolf run around the park where there are children. They’ll lock me up and shoot you.”

I would never hurt a child. But you still believe I am a mere animal and for some reason you think you are not mentally well. Not until I return home can I show you otherwise. The wolf lay down on his belly. His head pressed to the ground. Damn.

Ashlee’s eyes filled with tears at the distress in his voice and the defeat in his body language. It had been a few weeks since she’d gone on a crying binge and she didn’t want to start now. “I have to go. I’m sorry.” Why was she apologizing to her phantasm? She wiped the one tear that escaped from her eye with her hand and turned to go.

Wait. Her wolf growled and stood up. Ashlee turned back to him, her eyes wide. Do not cry. I cannot stand it. Please, beautiful girl, won’t you tell me your name?

“My name? Oh.” She blushed. “My name is Ashlee Morrison.” She started to leave again but whirled around. “What is your name?” At least she could give her delirium a label.

My name is Tristan Kane. My family calls me Trip.

She raised her eyebrow. They’d had a kid in her high school who had been called Trip. She hadn’t realized it was such a popular nickname. “You have a beautiful name like Tristan and they call you Trip? Hey, wait a second, a guy I knew with that nickname, they called him that for a reason. He was the third son in his family. Is that true for you? Are you the third son?”

I am. I’m sorry I am moping around. Five months I have been in this cage. Please don’t worry about this tonight. We can sort it out tomorrow when you come.

She shook her head. “I’m not coming tomorrow. It’s my day off, and then the next day is Sunday so I won’t be back until Monday.”

That long? Tristan shook his head. Do not worry for me. I will not have you upset. Ashlee, whatever you do, don’t let anyone tell you this isn’t real. What is happening is very complicated, but explainable just the same. I am real and you can hear me because you belong to me.

Ashlee turned and ran as if someone chased her. She didn’t turn around to look at Tristan. When she reached her black Lexus RX hybrid SUV, she swung open the door and drove her monstrous car as if her life depended on it. What should have been a fifteen-minute drive home, she made in less than five minutes. It wasn’t ‘til she got home she remembered her shift wasn’t over for another hour. She was sure to get a stern lecture.
Royce, Rebecca. Her Wolf (The Westervelt Wolves Book 1) (pp. 6-11). Rebecca Royce. Kindle Edition.

I felt sorry for Ashlee, she has so much thrown at her in such a dramatic way. Life changing things that have her drawing on a strength she didn’t know she had.

I like the way this pack first change into wolves, the mixture of magic is compelling. Women have the healing and other things that keep the pack safe.

A curse that is thought to be gone causes lots of problems for Tristan and Ashlee.

We meet many key players in this book, including Ashlee’s parents and sister, Tristan’s brothers one of whom is ‘acting alpha’ and the guys are known as the ‘Royals’. Plus Cullen the pack enforcer who calls addresses them as Princes, all the time.

Strength, persistence, drama and love all combine to make this a page turning read. I will be continuing with this series. 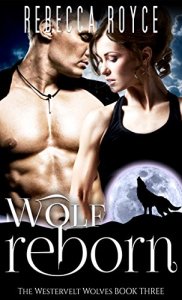 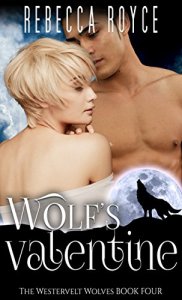 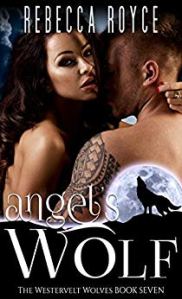 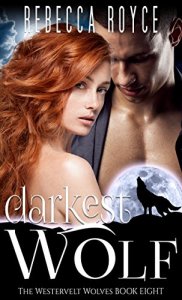