She wants to work on a pit crew—not be a princess.

Mechanic Isabel “Izzy” Poussard’s life revolves around cars. Determined to be a member of a racing team’s pit crew, she’ll do whatever it takes to make her dream come true. The last thing she expects is for a gorgeous guy to step out of a limousine and tell her she’s a long-lost princess…and his wife.

Crown Prince Nikola “Niko” Kresimir of Vernonia wants one thing from Isabel—an annulment. The pretty American wearing grease-stained coveralls is too rough around the edges to be the future queen. Their marriage, the result of an archaic custom neither knew about, needs to end so he can modernize his country.

As sparks fly, Niko and Izzy fight their growing attraction for each other. Neither wants to remain in an arranged marriage, but that might be the only way to keep peace in the kingdom. Is a love match possible where all their dreams can come true? Or will aspirations and pride keep them from living happily ever after?

No one is more surprised than Izzy when a limo shows up at the garage where she works. The occupant is even more shocking, a prince who claims she is his wife. All because of a box that belonged to her mother that she is looking for a key to open it.

Prince Niko now has a problem, he has a fiancé, Princess Juliana, their marriage will help rebuild and modernized his country following the conflict that had taken his brother’s life. Not a love match but one that is advantageous for both their countries. He needs Izzy to agree to an annulment so things can move forward as planned.

Unease crept down Izzy’s spine. The seriousness of the situation ratcheted up a notch with two lawyers present.

“My paralegal checked out the prince’s claims about the marriage while I drove over here,” Duncan said. “Vernonia had an old custom of children from royal families marrying but that is illegal now. A groom, however, still presents his wife with a bride box on their wedding night.”

Izzy bit her lip. That didn’t mean she was his wife.

“We may proceed now,” Niko said.

The tension in the office quadrupled. Izzy’s legs shook so much the box jiggled. She placed it on Rowdy’s desk and opened the lid. She removed the velvet-covered tray so the keyhole showed. “I didn’t realize the tray came out or there was a keyhole until after Uncle Frank died. He allowed me to see the box when I was growing up but never touch it.”

“Did your uncle say it belonged to your mother?” Duncan asked.

“No, but I assumed so.” Izzy hoped what she said wouldn’t give more credence to the prince’s claims.

“Uncle Frank told me it was important.”

Niko held the key he’d worn around his neck. “Let us see how important.”

His hand was as steady as a neurosurgeon’s. If it had been her, she would be trembling. Who was she kidding? She was trembling.

He inserted the key in the hole.

Izzy was tempted to close her eyes. She held her breath instead. She wanted to know what was inside, but she wanted nothing the prince had told her to be true.

He turned the key.

The air whooshed from her lungs.

No, this can’t be happening. It can’t be true.

The bottom portion slid out. A hidden drawer.

“Would ya look at that,” Rowdy said with a hint of awe.

Even though she had been waiting for this moment, she was afraid to look. Her curiosity vanished, replaced by trepidation. She didn’t care what was inside. She only wanted things to be the way they’d been before Prince Niko arrived.

“It’s the same tiara,” Jovan said from across the office.

No. Isabel didn’t want to see, so she squeezed her eyes shut. Her chest constricted. She shuddered.

Someone touched her shoulder and squeezed gently. Rowdy. Both he and Boyd could be big-old teddy bears. She opened her eyes, but Niko’s hand was on her.

“Isabel.” Concern filled Niko’s voice. “Would you rather wait?”

His tenderness brought tears. The situation, not him. Still, she appreciated his gesture of comfort, drew strength from it, too. “No.”

Straightening, Izzy peered into the drawer, past the small diamond tiara to find papers, photographs, and more jewelry. Her uncle Frank could have found the box, bought it at a garage sale, or stolen it in desperation. Maybe that was why she had no key.

No, she was being silly now. None of those things would explain Niko knowing her mother’s name or his key fitting the lock. Isabel needed to accept what was in front of her, except…
Melissa McClone. The Reluctant Princess (Kindle Locations 503-534). Cardinal Press, LLC.

A princess of a country she’s never been to, leads Izzy to a journey even more difficult than she could imagine.

This story becomes even more complicated when the King refuses to let them annul the marriage stating it would cause irrevocable damage to the peace.

I also fell in love with Princess Juliana she is definitely a class act and is instrumental in helping Izzy manage her new role.

A delightful story of an interesting marriage that leads to falling in love. With some laughter, some tears and just enough heat this book is a must read. 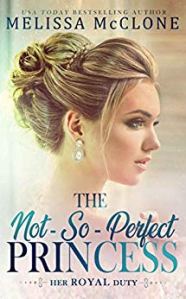