Melanie Syed has seen a lot of things over the years from ancient witch possessions to man-stealing curses and wild magic coming alive, but she’s never actually gone head to head with her own path until it—or rather he calls her for her services as an attorney.

Elliot Boothe is the last scion of the Cursed family. His ancestors have all gone blind and mad, one by one, and now it’s his turn. Determined to end the curse with him, he’s avoided relationships and complications, but Melanie is the one thing he’s desperately needed—a friend.

It’s going to take a lot of legal and spell footwork for Melanie to get the answers Elliot needs, especially when she finds herself the target of assassination and Elliot offers her sanctuary. Can they save each other or was their love tragically cursed from the first?

In this stunning conclusion to the Wards and Wands series, we meet Elliot who is cursed to die young. A curse that no one has ever been able to break.

He requests a visit from Melanie as he’s getting his affairs in order.

Time seemed to have paused inside the house. The smell hit her first. The cleaning products Elliot’s mother spelled on the house must still be what the staff now used. Lavender. Chamomile. Mint. There had never been a time she’d scented those things that it hadn’t reminded her of the cleaning days. The poor woman had died days after her husband did. Their souls had been truly bound together.

Melanie lifted herself off the ground with a spell. It was habit as much as anything else. If no one walked on the ground, they couldn’t make it dirty. The butler had been walking, but lifted off the ground when she did. Maybe it wasn’t a rule anymore. Maybe Elliot didn’t care if everyone floated or not.

“He’s in his office. Right this way.”

She knew exactly where it was located but followed him just the same as it was polite. She wasn’t a young child learning to fly by dashing through this house when the family wasn’t home. She was here to do a job, even if surely Elliot must already possess a team of lawyers who could do this.

The butler opened the door with a magical wave of his hand and closed it again after she was inside. It shut with a click.

The room, bathed in burgundy, felt heavy, like the air weighed more in here. Elliot stood, his back to her, facing the window overlooking the garden outside. He turned his head slightly as Melanie the entered the room. She gazed for a long moment, taking in the sheer size of him. He’d grown since she’d last seen him. He was broad shouldered, bulky, like he worked out regularly, though he’d been a skinny teenager. His brown hair had been cut short. Whiskers covered his mature face, but he didn’t look old.

He wore dark sunglasses, which told her all she needed to know. The curse really had advanced. Elliot Boothe, the fantasy of her youth, had gone completely blind.

“Melanie Syed.” He smiled, not showing any teeth or moving. “You came.”

He used the desk for guidance as he walked toward her. “Forgive me. I like to stand by the window. I can’t see it, but I swear I can feel the light.” He touched his sunglasses. “I think with you I can actually take these off. You were here with my father when he passed. You know what the eyes look like.”

She nodded before she realized how asinine that was. He couldn’t see her, obviously. “I remember what it looked like. You can take them off.”

“Great. Because it’s like the icing on the cake of this misery that I have to cover up my eyes to not scare little children.” He took the glasses off and set them on the desk. He stared at Melanie from across the room, not quite looking at her but in her general direction. His eyes were totally white. Not just the irises. Not the corneas. The entire socket of his eyes were bright white, like the most intense shade of it ever. Neither snow leopards nor the clouds had anything on what the curse did to the Boothe eyes.

Melanie walked toward him, not letting herself overthink it. His father had fallen into a huge pit of depression when this happened to him. She had to imagine that waking up totally blind one day to nothing but whiteness would make anyone feel lonely.

She squeezed his hand, and he frowned immediately before he dropped their linked fingers. His hands hadn’t been smooth or manicured but tougher, with calluses that made her wonder what he’d been doing to get them. As far as she knew, he’d never had a profession. He invested money, as his father had before him, and had the Midas touch. Melanie had learned a lot of what she knew from his father, but what could he have been doing that would have given him those hands?

“So…” She needed to say something. “This happened early.”

Melanie had always believed the best thing to do was point out the elephant in the room and not pretend it wasn’t there.

He nodded. “Seems to be the case. I… I think it’s for the best, actually. Get it over with. I was tired of it stalking me anyway. I’d determined very early I would be the last person to ever have this curse. If I couldn’t cure it, which I tried to do, believe me, I wasn’t going to pass it on. I’ve been wondering if it’s taking me early as a punishment for not procreating.”

The way he spoke about it—this curse that had plagued the last five generations of his family—was as though it was a living, breathing thing. Melanie didn’t remember his father doing that. But then again he’d lived a full life before it took him down.

“You think the curse… hurried up your punishment… because you didn’t find the right woman to have children with?”

He ran a hand through his hair. “I determined very early on that I wouldn’t allow this to continue. Even before I saw my father taken down to madness, a shell of the man he’d been before, devoid of magic, shaking in a corner. I wouldn’t leave behind any heirs that could take the curse when I died. It ends with me.”
Rebecca Royce. Tragic Magic (Kindle Locations 141-180). Kindle Edition.

Melanie is a fighter and she isn’t going to let Elliot give up. She starts by asking all her enforcer friends for assistance.

She also ends up hiding there as a problem arises with the divorce case she is working on.

I laughed, I cried and held my breath more than once as I read. This is a beautiful relationship with plenty of heat in spite of the curse.

I wish there were going to be more books, I love this world. 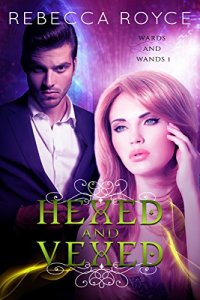