Life is on the move again…

After a long slow-ass recovery, Stone finds himself triumphantly back at work at Levi’s new company. The action comes fast and furious on his first run out as they rescue a senator’s daughter who’s been kidnapped in the Middle East.

Lissa will do almost anything to thwart her father’s plans for her. Getting kidnapped wasn’t on her list. And once she meets Stone no other man matters. She falls, and she falls hard. But even on home soil, there’s no respite as she finds the nightmare has followed her home…and she’s caught in the middle of it.

It’s a battle that requires both of them to not only clear her name but to keep her safe…especially when a twist is thrown at them that they didn’t see coming.

I have the first three books of this Heroes for Hire series in one book. I am reviewing them individually as I read them.

I love Stone, he has such inner strength and determination, as well as some problems. This is his first mission since his recovery, issues with swelling and his prosthesis have been frustrating for him.

Lissa is a senator’s daughter who has been bucking her father’s will for a long time. Finally out on her own she volunteers all over, helping refugee in whatever capacity she can. This time she ends up in more trouble than even she can imagine. Kidnapped along with two American doctors in Afghanistan, she doesn’t hold out much hope of rescue. The policy is no ransom and she isn’t sure her father would pay it anyway.

Levi and his team undertake the mission to get Lissa out and they get a surprise. They were expecting only Lissa and found the two doctors as well. One of which wasn’t doing all that well.

This is a favorite scene as things go a bit fubar.

She closed her eyes and tried to relax as the men tracked down the rest of their team. She could only hope nobody else would be hurt because of her actions. Her father was right about that. If she hadn’t run to help with the refugee camp, nobody would’ve come after her, putting their own lives in danger. It didn’t matter if they were paid or did this on a regular basis. If one of them died, she’d feel terrible.

Way too late for recriminations now. She knew somebody had been shot out there; she just hoped it wasn’t one of the rescue team.

On the other hand, if it was one of the enemy, how many more were there?

Susan’s tired voice startled her in the silent truck. “What’s going on? Where are we?”

She could hear Kevin’s low murmur as he tried to comfort his wife. His explanation was done in soft tones, as if that would matter.

The harshness of the scenario had Lissa wanting to run from the truck and do something. Being confined was killing her soul, and bringing up her fear. She used to have panic attacks all the time growing up. But she could lay the blame for that at her father’s feet. They began after he locked her in the closet when she wasn’t “being good.” She thought she had overcome her confined-space issue when she’d finally taken the elevators instead of escalators.
It had taken her a long time and a lot of tears and sleepless nights to get to the point where she could now ride them freely. But that didn’t mean she liked them.

And now she was in this truck. And although not confined in the same sense of the word, it felt restricting and, even if she left, she had no place to go. She tried to control her breathing, but the panic was setting in. She closed her eyes, clenched her fists, and took great big gulping breaths, but it wasn’t enough.

Finally she couldn’t stand it. She bolted upright and rolled onto the front seat to push open the passenger door, leaning out, taking in large amounts of fresh air. Behind her she could hear Kevin’s shocked gasp. But she couldn’t worry about that. She was too busy sucking in oxygen.

As she held the door, the tremors working down her arm made it shake in the night. A strong hand reached up to grip her arm. She didn’t know if it was to hold her in place to stop the shaking, or to make her relinquish her hold on the door. No success with the latter. Instead she gripped it like a lifeline.

She didn’t have time to react as a face appeared in the darkness. Instead of being scared, she was relieved to identify Stone, their driver.

He studied her with concern. “You okay?”

She nodded barely. “I just … I just needed fresh air.”

But she could tell from the intensity of his gaze that he knew there was more to it. Now that she was no longer alone, and fresh air swooped through the place, she started to relax. She took several more deep breaths, telling her body to calm down, that it would be okay.

When he lifted her hand off the doorframe, she let him. But when he slid his down to hold hers, she froze.

Gently he squeezed her fingers together, a rough thumb stroking up and down on the back of her fingers. “It’s okay. Being scared is a normal reaction. You’ve been through a lot already.”

If he only knew. She gave him a slight smile and added, “I could’ve managed all that. But when you left me locked up in the truck …” She shook her head. “I thought I’d been doing so much better lately, but sometimes being confined confined gets to me.”

He smiled and patted her hand. “I can leave the door slightly ajar if that makes it better, but I can’t just stay here.”

She tensed at the thought that he was leaving.

Instantly he squeezed her fingers and said, “Don’t worry. I’m staying at the side of the vehicle. I’m not leaving you. It’s my job to stand guard here.”

“My hero,” she said with a light groan. But, of course, it was his job. Still it didn’t matter; she was such a mess right now she was grateful for anyone’s support. She lowered her head to her other arm and just relaxed across the front seat. Her hand was still in his as he gently reassured her that she would be okay.

She thought she was out of the worst of the danger, and it was safe to relax. Then she heard a shout in the distance. Lifting her head, she studied Stone. “What is that?”

He lifted her palm to his lips and dropped a gentle kiss on the back of her hand and said, “Don’t worry. It’s my men, not the enemy.”

In the distance she heard, “Stone?”

Instantly he straightened. He ducked down to look at her and said, “Stay here. I’ll be back in two minutes.”

She snorted. As if she was going anywhere. No way in hell. She was warm, safe, and dry. And soon this vehicle would get her the hell out of here. But none of that made her feel any better right now.

She pulled her hand in and tucked it against her chest, wondering at his gentle kiss. For such a huge man, the graceful gesture of comfort seemed out of place—and yet not. His actions had been smooth, natural. And that made all the difference.

With her arms tucked up close, she huddled in the front, listening for the men to come back. Only they didn’t come anytime soon.

And her return home was to be delayed yet again. She rolled to her back and stared straight up at the ceiling. A chill set in. Likely shock. “Kevin, you doing okay?”

But she could hear the underlying worry in his voice. They were all fine. But for how long?
Mayer, Dale. Heroes for Hire: Books 1-3 (pp. 258-261). Valley Publishing Ltd.. Kindle Edition.

First London and some interesting things with luggage, followed by the journey to Melissa’s family home. She does manage to elude her father edicts and join them for the trip to Texas in an unconventional way. This leads to the discovery of much destruction in Melissa’s house and so much more.

With nothing really making sense to her, Stone knows he can’t let her shoulder all of this alone. The team in good conscience needs to unravel all the mayhem and mystery.

Lots of interesting surprises and the simmer to sizzle relationship between Stone and Lissa will have you turning the pages.

I am off to read the next book in this series. I really hope to catch up before Vince’s Vixen is released in October. There’s a lot of books to go. 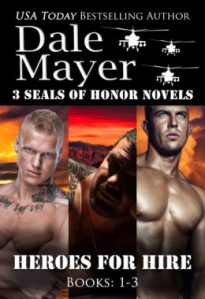 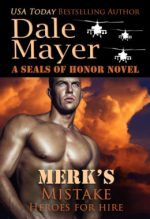 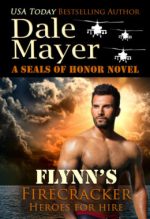 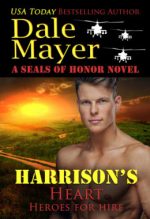 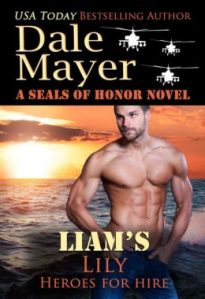 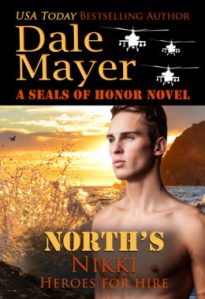