Two outcasts shared a friendship in childhood, but for Asher Swain, his memories were tortured by an accident that claimed his only friend.

Years later, he met a woman reading as she sat by a pond in a park. The two strangers began a friendship over a love of literature that developed into love for each other.

But, when Asher realized they shared a past as well as their present, he kept his secret, afraid for Penelope to find out who he really was.

When the truth is revealed, will they be ripped apart or will their love make them stronger?

Loosely based on the fairy tale, The Ugly Duckling.

Language and sexual situations similar to what you would find in an R-rated movie.

This book truly tugged at my heartstrings and I love how this series interprets a fairy tale in each book. This one begins as two children find acceptance and friendship in each other, and are separated by circumstances that were out of their control.

Asher has built himself a small real estate empire. He buys older homes renovates and updates then rents them out. He also has one small apartment building not too much for one man to handle. One of the biggest things he’s done is bought a building, renovated it and gifted it to be a homeless shelter, he remembers staying in one before his mother moved in with Tim, the man who caused he so much pain.

Penelope is a bookkeeper for a small real estate firm, she’s looking forward to the retirement of the current office manager, sure she will get the promotion and the raise. One of Penny’s favorite things to do is read in the park by the pond before heading home from work. She has a different sort of story, all related to a childhood accident and the attitudes of others.

It’s while Asher is on a run in that park, he first meets up with Penelope. An avid reader, he is attracted not only to the woman, but the fact she is reading a hard copy book, one of the classics.

As he rounded the edge of the pond, his step faltered as a small pebble in his shoe caused him to wince. Wondering if he could keep going, his gaze snagged on a bench with a lone woman sitting on one side. Taking advantage of the space, he ran past her and sat at the far end.

Untying his left shoe, he pulled it off and shook out the pebble. He rubbed the bottom of his foot, grunting slightly as his thumb dug into the bruise.

“That must have been painful,” came a soft voice from the other end of the bench.

Leaning against the back of the bench, he twisted his head and observed her looking at him, a shy smile on her face before her gaze dropped back to the book in her lap. Her dark hair hung in a sleek sheet to just below her shoulders, and as she leaned forward, it created an effective curtain to hide her face. Before she had looked back down at her book, he had spied dark eyes. It was a warm day, but she was dressed in jeans with a light sweater. Her build was slight, her delicate hand resting on the open pages of the book. She kept her head down, and he found a strange longing to have her speak to him again.

“It was,” he agreed, wondering what he was doing. Striking up a conversation with a complete stranger was something he usually avoided. “I can keep running through a muscle spasm or a cramp, but a rock in my shoe is impossible to ignore.”

She twisted her head back around to look at him, giving him a better view. Her face had a healthy glow, kissed by the sun as though perhaps she often came to the park. It did not appear that she wore makeup, other than a pink lip gloss. Her eyes were dark brown, and he found it unusual that he would even notice. Her hair was not wavy but appeared like strands of silk hanging about her shoulders. She reached up and tucked the strands behind her ear, saying, “I’m sure it is.”

It took him a few seconds to think about her reply, forgetting what he had said to her. Feeling foolish, he gave a quick nod and looked back down to his shoe. Sliding his foot in, he bent over, tying the laces.

“You must run often,” she said.

“It’s more comfortable to run in shoes that are broken in,” he replied, staring down at his worn, scruffy, favorite pair of running shoes. The thought crossed his mind that she might have been making fun of them, but when he twisted his head to look at her again, her face still held a gentle smile.

“I’m afraid I wouldn’t know anything about running shoes,” she said. “I just meant that you look like… well,” she laughed softly before continuing, “you look like a runner.”

“Oh,” he said, sitting up and looking back at her. A blush crept over his cheeks, and he felt his ears burning. Old habits die hard, but he was embarrassed that he had assumed she was making fun of his shoes. Hoping the shade of the tree nearby hid what he was sure were pink-tinged ears, he struggled to think of something to say. He mumbled, “Yeah. I like to run.” At that moment he wished he had Rafe’s or Jaxon’s easy conversational skills.

Grasping for something to say, his gaze dropped to the book in her lap. “I guess you like to read,” he said then blushed deeper. You like to read? That’s the best I can come up with?

He placed his hands on the bench beside his thighs, ready to jump up and continue his run, when she said, “Yes. I love to read. I especially like to read paperback or hardback books, even though I have an e-reader.”

“Me, too,” he admitted, relaxing his hands so that he could lean back against the bench again. “I’ll sometimes read on my phone if I’m waiting somewhere, but when I’m at home, I prefer the feel of the book in my hands.” Her smile widened, and he relaxed slightly. Dipping his chin toward her book, he asked, “What are you reading?”

Now it was her turn to blush, and he found the becoming pink on her cheeks matched the pink lip gloss she was wearing. Ducking her head, she closed the book and turned the cover so that he would be able to see what was in her hands. Jane Austen’s Pride and Prejudice. “I’ve read it so many times,” she confessed, “but each time I find a new passage that seems to speak to me.”

Without thinking, he blurted, “’ When I have a house of my own, I shall be miserable if I have not an excellent library.’”

She laughed out loud, her eyes seeming to sparkle with the reflection of the sun off the pond. “I can’t believe you know that! I think my only response can be, ‘I declare after all there is no enjoyment like reading! How much sooner one tires of any thing than of a book!’”

A chuckle rumbled from deep inside, and he smiled in return. “I suppose I should be embarrassed that I can quote from Pride and Prejudice.”

She shook her head emphatically and said, “Absolutely not. There is nothing embarrassing about reading a book, especially not a classic. I think there’s so much that we can learn from the words of others.” Cocking her head to the side, she added, “But while it’s not embarrassing, it is uncommon to find a man who can quote any book.”
Maryann Jordan. Asher – ARC copy – Not for sale or distribution: Heroes at Heart (Kindle Locations 592-630).

This little conversation about Pride and Prejudice has all the elements for a great friendship, only thing is he forgets to introduce himself and get her name.

There’s a lot of healing for both Penny and Asher in this book, but it doesn’t come easy especially when he realizes she is his Penny from all those years ago.

I love seeing all the guys and Miss Ethel is a gem. The family they’ve formed definitely has room to add in the women these men have found.

I laughed and cried, and I may have growled a time or two as well. Once again this series has provided me with an uplifting story to read with just the right amount of heat. 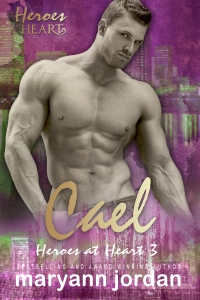 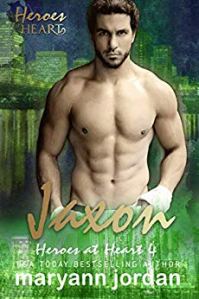