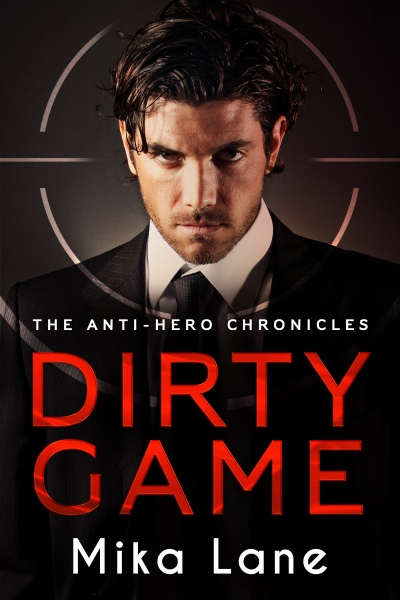 Saved from a violent shoot-out, I am now “in debt” to Luca and Leo Borroni, the gorgeous mob twins of Las Vegas.
They said I’d be dead without them.
And that my payment is to play “The Game.”
Problem is, I’m pretty sure I’ll end up the loser.
Because guys like the Borroni brothers win. Always.
I mean, they aren’t the most brutal men walking the streets of Sin City because they’re sweethearts.
And I’m no match for their wicked ways.
I may have survived their shoot-out, but I don’t know how I’ll survive what’s next.

NOTE:
This hot, over-the-top romance includes sexy mafia hitmen with a penchant for pursuing and protecting the women who give them a run for their money. If you love outrageously naughty stories as a way to indulge your not-so-secret bad girl side, this is for you.

This may have elevated itself to a new favorite from Mika Lane.

Twin brothers Luka and Leo have been frequenting the Loaded Dice. A seedy strip club where the owner has managed to get on the wrong side of their uncle. It’s time for him to pay the price but first the brothers have to send all the girls on their way. Luka has his eye on their waitress Echo, so there is a different fate they have planned for her.

“So, Echo, there is something I wanted to discuss with you.”

God, he was handsome. I hated that about him.

And it was so unfair the universe made two of him, essentially.

“Since I saved you—”

I leaned toward him. “Excuse me? Saved me? You did no such thing.”

He leaned back slightly in his chair and looked at me. I could swear I saw amusement on his face.

I wouldn’t have minded smacking it right off, too.

“I could have run out of there. I didn’t need you to save me,” I said, sitting back in my chair.

I didn’t owe that asshole jack. Time to wrap this fun little lunch right up.

I stood to leave. Yeah, he definitely looked amused now.

“Luca, I don’t have much money, but I’ll give you what I have. I’ve been saving it to move my little sister out here, but if you really want it, you can have it—”

He frowned and cut me off. “Do I look like I need money?”

“You have to come home with me,” he said, polishing off the last oyster and looking mighty smug.

This was where I’d have doubled over laughing if I hadn’t been so damn scared of the man.

“You have to come home with me and live with my brother and me for a three-month three-month period, and play what we call ‘The Game.’ After that, you are free to go.”

At that, I actually did burst out laughing just as some sort of soup was delivered. Luca picked up his spoon and dove in.

“Yeah, that’s a good one, Luca. Hilarious. But I gotta go now. Thanks for the clothes.”

As I stood to go, I turned and leaned into his face. “And thanks for killing everyone at my club, you fucking asshole.”

His hand found my wrist, and tightened like a vise.

Oh. Crap. I tried to pull out of his grip, to no avail.

“You will have your own room in our home, and you don’t have to do anything you don’t want to.”

I waved my free hand for him to stop. “You don’t understand. I have to work. I have to support myself and my sister. In fact, I need to go find a new job since everyone at my old job is now dead.”

Again, he shook his head at me. “You don’t need to work.”

“You will be provided for, as will your sister.”

For the second time, I burst out laughing.

“I’m serious. You will be supported by us, and very generously, at that.”

Okay. I go from cocktailing in a shitty dive strip club to being a prisoner of the two gorgeous twins of organized crime?

What was I going to tell my roommate, Yasmina?

Luca got up from his side of the booth, still gripping my wrist, and pushed me back into my seat. I was effectively trapped. That’s when he let go of my wrist.

And damn if he didn’t smell great.

“Luca, was that weird smell at the club this morning… from guns or something?”

He picked up a lock of my hair and brought it to his nose. “Yeah. That was from the guns.”

And don’t you know, while he twisted a lock of my hair around his forefinger, he leaned toward me, right there in the restaurant, and brushed his lips across mine.

It was as though I’d put my finger in an electrical outlet. Tingles shot through my every pore. And while I knew I was supposed to hate the guy, something made me lean toward him for more.

God, I was in trouble.

Really having no choice, Echo moves into the Twin’s home. She’s still not sure where all this is heading or how serious her situation is.

Plenty of heat as Luka initialized the Game. However, there are those who aren’t happy about Echo’s place in their home.

A look from the mafia side of things gives this an interesting twist. I loved the feisty Echo and the way the relationship between her and Luka develops.

I can’t wait to see what Mika has in mind for the next book.