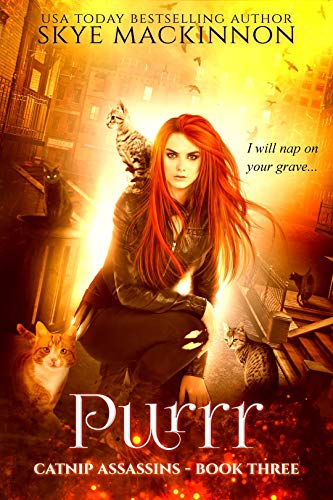 Five signs a cat is in heat:

Kill me now. This is going to be hell.

The third book in this purrfectly exciting urban fantasy series.

Kat has a problem, she’s become decidedly furry although she is still in human form, and she is meowing not talking. Hiding in her attic hammock, she just wants everything to go back to normal.

Ryker shows up to talk to her, she really doesn’t want to listen but he does reveal some interesting information.

I rub my sternum where Gryphon managed to crack two of my ribs while resuscitating me. My body isn’t healing as quickly as it should. I’m broken and I don’t know how to fix myself.

“Getting better,” I lie. It still hurts like hell when I touch it. “I hope Gryphon isn’t feeling guilty still?”

Ryker chuckles. “I don’t think he’s going to stop feeling guilty until you’re walking around healthy and happy. Lennox is still blaming himself as well. This whole house is filled with nothing but self-pity and self-loathing.”

He sounds bitter about it, and I realise that I’ve never properly talked to him about his new human self. I’ve simply accepted that he can now shift, that he’s found his human side.

In response, he gently squeezes my shoulder. “It’s confusing. I thought it would be hard to walk on two legs, to talk with humans, but it’s like I’ve been doing it all my life. I still don’t like looking at mirrors though. That face doesn’t belong to me. In my mind, I’m still a cat.”

“We have that in common,” I mutter. “I don’t want to see myself in the mirror, either.”

“Show me.” His voice is a quiet demand, hitting my senses at the same time as another burst of his scent.

I find myself turning before I can stop myself. I swipe my hair out of my face and let him look at me.

I was expecting surprise. Disgust. Horror at my ugliness. Instead, he slowly reaches out and strokes my cheek.

Of all the reactions I imagined, this wasn’t one of them. I don’t know how to respond. I stare at him in confusion.

He chuckles. “Did you think I’d run away screaming?”

I nod, unable to speak at seeing the heat in his gaze.

“It makes your eyes seem brighter,” he whispers and kneels on the floor so that we’re on the same level. His mouth is close to mine, too close, but I’m stuck in my hammock and can’t move away.

“You’re beautiful,” he repeats. “You shouldn’t try and hide the cat in you. You’re both, cat and human, and you need to give her space to unfold, especially now.”

He quirks an eyebrow. “You don’t know? I can smell it from half a mile away.”

“Does that mean this doesn’t happen every time? Is it the first time you have this fur on your face?”

“I have no clue what you’re on about,” I say, repressing a frustrated growl. If he’s not going to tell me what’s going on this very second, I’m going to bite his head off with my overly sharp human teeth. Or maybe some other bits that are easier to bite off than a head.

“Estrus,” he replies gently. “Surely this isn’t your first time?”

That word sounds familiar, but I don’t want to believe what I think it means.

“You’re in heat,” he explains, confirming my fears. “I thought you knew.” He clears his throat. “How can you not know? Every cat in the area will know by now. Your scent is rather strong.”

I glare at him. “Are you telling me that I smell?”

He winces. “No, not smell. Your scent is that of the most fragrant rose, delicate and strong at the same time, full of promises of beauty and happiness.” He gives me a small smile, tinged with a trace of embarrassment. “I’ve had my cats spread the message that you’re not a normal female, that you’re out of bounds, but there are dozens of males leaving their marks down below in the courtyard.”

I squeeze my eyes shut, wanting to escape. And I here I was thinking it couldn’t get any worse. How wrong I was.

I’m in heat. That would explain the fur, the meowing, how I don’t feel right in my own skin.
MacKinnon, Skye. Purrr (Catnip Assassins Book 3). Peryton Press. Kindle Locations (111-146). Kindle Edition.

Plenty of humor in this one along with the ramping up of problems related to the pack.

With Ryker now in human form, there are many questions and other surprises in store here.

Finding the rest of Kat’s clones and shutting down pack research is imperative. I couldn’t put this book down.

I’ve already read Hisss so I am now waiting for Lick, the next book in this series. It’s going to be very interesting I’m sure. 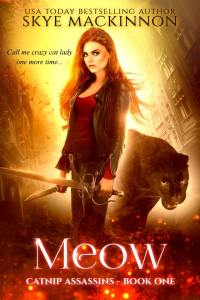 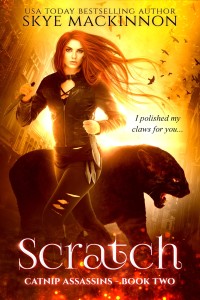 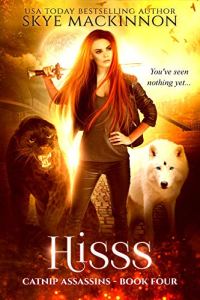 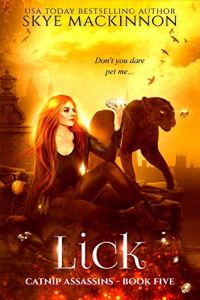 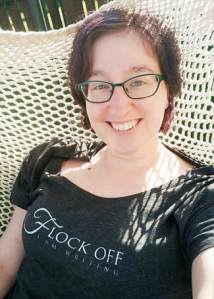