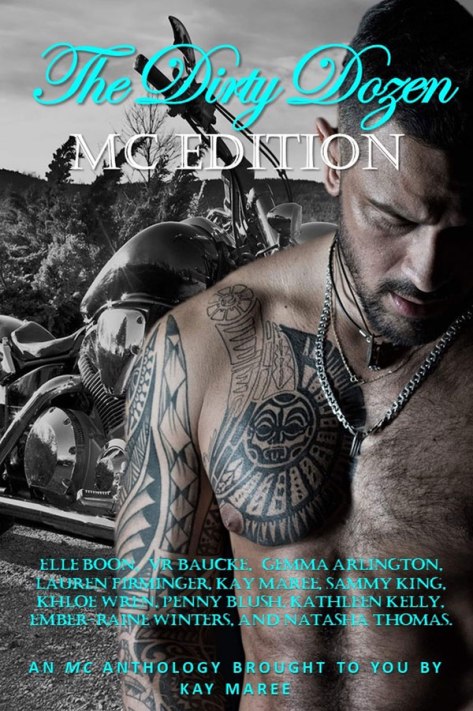 Ever wonder what it’s like
to take a walk on the wild side?

Find out as these eleven authors show you as they take you on a journey through their MC Worlds.

See what it’s like to be thrust into the dangerous world of an MC, where brotherhood and loyalty are more than just words.

These eleven authors will have you captivated and wishing to wear one of their MC patches with each word you read.

Warning: These stories have adult content. Some also contain graphic violence and dark emotional scenarios which may trigger some readers. Proceed with caution. You have been warned.

I am only reviewing Royally Taken – by Elle Boon here. I am still reading the others and will do a complete review of the Anthology when I am finished with all of them.

He’s the protector. Sometimes he walked a fine line between right and wrong, but make no mistake, when shit goes south, he’s the one you’d want to have your back.

I fell in love with this series in the first book Royally Twisted. Now the tale continues as the Royal Sons take on the rescue of Ayesha’s sister from a human trafficking ring. Little did they know they would be getting some help from an unexpected source.

Kailani Travino had been planning her escape from her father and brother ever since she turned eighteen, and she wasn’t going to let them hurt their latest acquisition either. Of course that makes her escape a bit more difficult and dangerous.

“Are you seeing what I’m seeing?” Traeger asked, wondering if his eyes were playing tricks on him. Surely he didn’t just watch two women scale their way down the side of the mansion. Well, small in the sense it wasn’t a Kennedy size mansion. Fuck, this mission just became a little more complicated.

“The first girl looked like the one Keys gave us information on. The other one, I didn’t recognize. What do we do with her, boys?” Digger asked.

Traeger looked at the other man. “We grab ‘em both and figure out the what the fucks after.”

They’d driven down with Digger and Coal, both men driving their cage vehicles. While the MC preferred their bikes, when they went on a mission, they used what they needed, and a cage or a vehicle on four wheels was usually needed. Digger drove the lead SUV, a tricked out armored Escalade that fit eight, while Coal drove a van that could hold a dozen, and also housed a state of the art computer system.

“Sounds solid to me,” Duke agreed.

“My facial recognition program says one of the females is the sister of the fuck who took the girl we’re here to rescue, which by the way, it appears she’s helping our target escape,” Keys explained through the speaker system of their vehicle, letting them all in on what he’d found.

“We better move. I see movement on the upper floors. I think the fucks in question know their girl is missing.” Traeger opened the door, moving before he’d finished speaking, blending into the waning night. There were a few things he was excellent at—fucking, shooting any type of weapon with accuracy, and blending into his surroundings. Even at over six feet two, he knew how to find the shadows and become one with them. He made sure his rifle was close just in case he needed it as he moved toward his targets, keeping his ears peeled for any indication that the men from inside had come out. Thanks to Keys, they had already disabled all the alarms inside and out, so even if the women inadvertently would’ve triggered one, none would go off.

He and King moved like a team, both silent and deadly when needed, each of them taking a route toward the women that was sure to intercept wherever they planned to go, before they had a chance to get there. King motioned for him to stay closer to the house, while he moved farther ahead in case there was trouble waiting in front of the women. From the intel they’d gotten on the drive down, there shouldn’t be, but Traeger knew it only took a moment for shit to hit the fan. In cases of human trafficking, none of them liked to gamble with the lives of women or children, or in this case a teen girl.

Flood lights began lighting up the front yard, making it nearly impossible for him to find his shadowy spots, but he didn’t change his course, staying low, picking up his pace until he finally reached the two women at the same time as King. His arms came up and around the older of the two, his hand clamping over her mouth, silencing her scream.

“Sssh, I’m not here to hurt you. Well, that is unless you’re part of your brother’s shit, then all bets are off,” he growled.

Traeger held her slender body against his, feeling her instant surrender against his chest.

She shook in his arms for a moment, then relaxed as if all the fight went out of her.

“We need to move. Keys says there’s movement inside and lots of it,” King said, his deep voice barely above a whisper.

Both girls whimpered but between the both of them, neither could say anything.

“Your sister’s looking for you. If you’re a good girl, I’ll have you back with her by sunup,” King assured the young girl.

Traeger’s woman stiffened in his arms. “What’s the matter, you upset we’re taking away your money maker?” he asked, venom lacing his words.

The younger female in King’s arms squirmed, trying to get away. “She saved me, you asshat,” she muttered out between King’s fingers.

Traeger raised his brows but didn’t say a word. “We need to move. You got your target under control Pres, or you need a little assistance?”

King raised one brow, his eyes, from what Traeger could see reflected from the moonlight, clearly telling him his friend, and President of the Royal Sons, would be paying him back for that remark. Traeger gave a low chuckle, figuring they’d both need to blow off some steam when they got back to the club, unless they found another way to expend the pent up energy. The woman he held moved against him, reminding him of another way he could blow off steam, a much more pleasurable way for sure. However, fucking a woman who had clear ties to one of the largest drug cartels on the west coast, one that also dabbled in human trafficking, was a sure way to wind up dead, or in jail. Neither option held much appeal.

“You two done playing? ‘Cause you got about ten fuckers coming in hot right behind you. I can give you a distraction, but you’re not gonna make it back to us the same way you went in. Find another way, and we’ll meet you at plan B.”
Boon,Elle. Royally Taken. The Dirty Dozen: MC Edition. Kindle Locations (3027-3069). Kindle Edition.

There is plenty of suspense and action as Traeger ‘Trigger’ takes Lani to safety. Well sort of.

A page turning read that may contain triggers. I couldn’t stop turning the pages as this story unfolds with lots of emotion, pain, romance and sizzle. 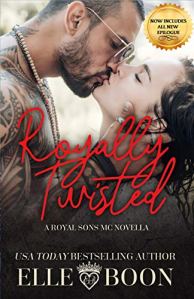 Elle Boon is a USA Today Bestselling Author of sexy alphas, strong heroines, and sinfully sexy romance. She lives in Middle-Merica as she likes to say…with her husband and Kally Kay her black lab and writing partner. She has two amazing kids, Jazz and Goob, and is a MiMi to one adorable little nugget named Romy, or maybe better known as RomyGirl, who has totally won over everyone who sees hers. She’s known for saying “Bless Your Heart” and dropping lots of F-bombs, but she loves where this new journey has taken her and has no plans on stopping.

She writes what she loves to read, and that’s romance, whether it’s about Navy SEALs, or paranormal beings, as long as there is a happily ever after. Her biggest hope is that after readers have read one of her stories, they fall in love with her characters as much as she did. She loves creating new worlds, and has more stories just waiting to be written. Elle believes in happily ever afters, and can guarantee you will always get one with her stories.