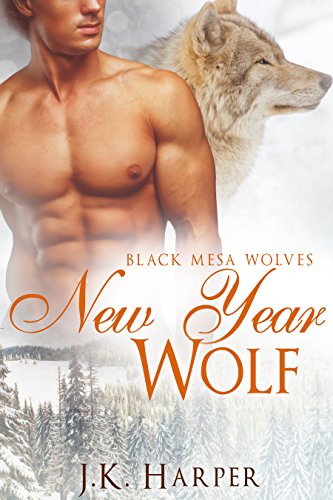 With devoted mate Rielle still his most ardent champion, down and out wolf shifter Caleb Bardou is slowly piecing back together his busted up life. He’s a fighter at heart—but when he was justifiably stripped of his Pack Guardian status, it about knocked him out cold.

Now he gives his all to a hot new business training other shifters for the fight ring. He’s back in the game and looking for a big win, his sexy mate at his side all the way. Then an old enemy shows up in the final round and threatens to sucker punch Caleb and Rielle’s future. It might finally be time for Caleb to show the world what he’s really made of…and make it a happy new year after all.

With the New Year approaching, I find myself in a shifter mood and this book for New Year’s Eve was the perfect way to satisfy that need.

Caleb has made many mistakes, the biggest of which had him removed from being a Guardian of the Black Mesa Wolves. That ruling came down from the Alpha, his father. Now it seems Caleb has found something that helped to not only rein in his temper and impulsiveness, but also gives back. He is competing and training young wolves to fight in the somewhat controlled atmosphere of sanctioned Cage Fighting.

His mate Rielle, is steadfast in her devotion to her mate. She’s been beside him the whole way and is more than just a little proud of him.

As Caleb and his trainee Bran celebrate their wins that have them heading to regional championships, Luke Rawlins a reformed rogue wolf approaches Raille.

“Oh, no,” Rielle managed to murmur the second she realized Caleb saw Luke. Her mate’s face went thunderously dark. The kind of expression that usually scared his opponents so badly they tended to lose half the fight right then. Her wolf whined in agitation, circling Rielle’s mind in nervous steps.

Caleb leapt back out of the ring and steamrolled his way right through the throngs toward them. Rielle heard Lily sigh with just a touch of exasperation and felt Kieran stand more rigidly, although neither one moved an inch to prevent the black storm racing pell-mell in their direction.

Luke didn’t move either. There was exactly zero love lost between him and Caleb, although they’d never actually come to blows as far as Rielle knew. Luke was a former rogue wolf, who’d really just been trying to escape his extremely unstable home pack under circumstances that were still mysterious. He was now under the explicit protection of the Black Mesa Wolf Pack, under the direct orders of its Alpha. In fact, he’d shown such undeniable leadership qualities after he’d dropped the life of a rogue that he’d been tapped by Alpha to lead an adjunct pack.

Luke Rawlins, the former rogue wolf and avowed enemy of Caleb, would be alpha of his own pack, so appointed by the alpha of the Black Mesa Pack. And Caleb, who would never be an alpha wolf himself, had been stripped of his own pack role by the very same alpha—his own father.

Rielle and every single other wolf in the pack knew it still rankled Caleb like a weeping sore, despite his otherwise successful efforts to focus his energies and volatile temperament on his training business. She’d managed to keep the two of them apart as much as possible ever since she and Caleb had been mated. Darn it, she’d had no idea Luke was into these fights. Caleb had never once mentioned seeing him at one.

Her wolf whined in even greater nervousness as Caleb barreled down on them. Almost holding her breath, Rielle tried very hard to send soothing thoughts to Caleb through their Pack bonds.

“You will remove your paws from my mate,” Caleb said the second he neared them, his barely checked anger reaching the tense little group before he did. He didn’t even have to raise his voice above the noise of the oblivious crowd. His light blue eyes glowed with the strength of his wolf behind them, which also pulsed out of his already naturally deep voice and sent it throbbing into their heads. He looked, Rielle thought from some slightly awed place far away, like an enraged, ridiculously sexy Viking about to go all berserker. “Now,” he snapped, when Luke didn’t release his light grip on Rielle’s upper arm.

Hmm. Apparently the Pack bonds were not going to work very well at this moment. Rielle thought about reaching out her actual hand to him, but Lily’s almost imperceptible nudge against her side stopped her.

With the tiniest of bows, really just inclining his dark head, Luke easily pulled his hand away from her. He’d barely been touching her. Rielle knew in an instant he’d done it on purpose to provoke Caleb.

Really. Men. To herself, she shook her head, while her wolf gave a small huff of agreement before resuming her watchful glow out of Rielle’s eyes.

A pure wolf growl slipped from Caleb’s throat. The random shifters immediately beside them heard it and stepped away with exaggerated, slightly drunken exclamations of “Ooh, better watch out! Don’t piss off Caleb, yo!”

She felt Lily and Kieran both tense even more in the charged silence between the two wolves facing off.

“What makes you think you can ever touch my mate, rogue?” Caleb’s snarled words were almost hard to distinguish. Rielle knew how much more control he had over his wolf now than mere months ago. But as usual, any perceived threat to her made that control slip a little. Nothing like an overprotective mate to keep the instinctual wolf at the forefront rather than the more rational human.

“Because,” Luke said in that deliberate drawl he sometimes used, “I wanted to see your reaction.”

If steam could come out of Caleb’s ears, it would. Rielle swallowed against a suddenly parched throat. She could feel Lily’s tensed muscles on one side of her, Kieran’s coiled strength on the other. They were prepared, if it became absolutely necessary, to stop her mate from doing something stupid.

The winter wind outside sent in another chilly blast through the flimsy doors of the club. Rielle shivered in sheer reflex to the situation rather than the cold. Shifters could handle cold temperatures much better than humans, even when in their own human shapes. But the icy blast made the situation seem more fraught with sudden danger. Please, Caleb, relax, she begged silently, imploring him with her eyes.

Caleb’s eyes were granite, his expression murderous. Even the half-drunk shifters nearby sensed the change in the air and abruptly shut their yapping mouths, watching the scene with suddenly wide eyes.

Rielle opened her mouth to say something, anything, to lighten the situation. Before she could, though, the one sound she never expected fell from Caleb’s mouth.

Luke’s reasoning is much more than just to find out Caleb’s reaction.

Plenty of surprises and lots of sizzle between Caleb and Rielle.

I have to go back now and re-read this series, I’d forgotten how much I like this pack. 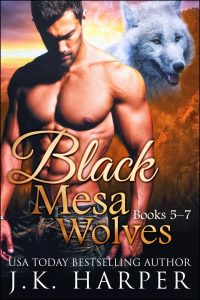 J.K. Harper writes paranormal romance. She lives in the rugged, gorgeous canyon country of the southwest, which is a great place to let her imagination run wild.