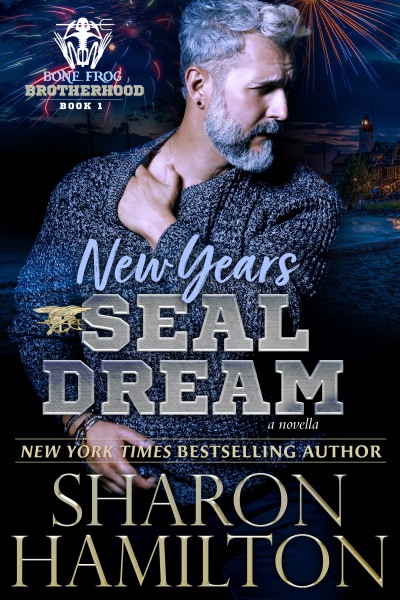 Tucker Hudson has been off SEAL Team 3 for nearly ten years. He reluctantly attends his former Teammate’s wedding on New Years Eve, vowing to keep his hands to himself and his mouth shut. Suffering nightmares from a tragic deployment, he barely left the Teams with an honorable discharge. Romance is one complication he does not need. And no one needs him either: not the Teams, not his family.

Brandy Cook knows she isn’t as attractive as the skinny blondes who usually attend SEAL weddings. Although she’s dieted for three months straight, she’s only managed to fit into a size 16 dress, and only then with the help of a monstrous undergarment that nearly prevents her from breathing. So when the big grey-haired former SEAL with a body built like Shrek takes a passing interest in her, she figures he’s been forced by a wager or some kind of trick.

But as the clock strikes midnight, the improbable happens and suppressed passions take over, ending in a steamy night neither will forget, but both will admit later was a huge mistake. When Brandy finds herself in trouble, Tucker turns out to be the only one who can keep her safe from the fury building around her world.

Tucker Hudson made himself a promise as he attends his former Teammate Brawley Hawk’s wedding. He wasn’t going to ogle the single women and he definitely wasn’t looking for a one night stand.

Brandy Cook wasn’t a svelte model like bridesmaid, she has curves lots of them. As she walked down the aisle with another one of Tucker’s friends she caught his eye and all Tucker’s resolutions go down the drain.

At the reception, Tucker and Brandy have a bit of a collision that splatters punch on her, but after some repairs to her makeup she dances with the groom. It’s the aftermath of that dance that changes everything for both of them.

Finally the music ended and the crowd cheered them. Brawley gave her a big bear hug that nearly toppled them both. She regained her balance, and, breathing heavy, she accepted his polite kiss to her cheek—a cheek she would hate to wash off.

Dorie was smiling as she re-attached herself to her beau, using his handkerchief to wipe the sweat from his forehead. All Brandy could do was watch them.

The room seemed to rumble behind her, but it was only the sound of the beast’s voice.

“Tell you what. I’ll go kidnap Dorie, and then you can have him.”

Even the hair at the back of her neck stood straight out. Her shoulders felt the tiny beads of moist breath against her flesh. It set up a vibration that traveled briefly down her spine. It was a curious reaction, especially for someone so beast-like.

Upon turning, she faced his warm brown eyes again. They were still twinkling little laugh lines evident at the sides. Somewhere the bevy of bridesmaids and their friends were laughing, and she didn’t care.

“That would never work. Brawley would be too heartbroken. He’d probably throw himself off the Coronado Bridge.” Her tongue nearly stuck to the roof of her mouth. “I need something to drink.”

“I think we should try this punch thing again, don’t you?” His voice was gentle, almost melodic, but very, very deep. She felt the words vibrate in her chest.

“Yes, let’s try to do it better this time. I think they’re out of napkins,” she answered.

Was that a growl she heard? She wasn’t sure. But it was a wicked growl that could fend off anything.

They walked together side by side.

At the table, he chose the larger clear plastic cups, handing her one and taking the other for himself.

She met his cup with a dull click. “No accidents. To a perfect year.”

The cool drink was refreshing, and she finished the whole glass faster than he did. His face was full of surprise.

“All that dancing,” she said between deep breaths, “I needed that. Probably should have had water—”

All of a sudden, she felt light-headed. The air constriction had finally caught up with the alcohol floating around her stomach and brain. As she began to see black spots in front of her eyes, she felt his arm underneath her back, holding her, keeping her from falling. Just before she blacked out, she heard the words,

Things heat up quickly between these two and as this tale progresses we learn even more about Tucker.

There’s lots of fun, some suspense and plenty of sizzle in this short page-turning read. 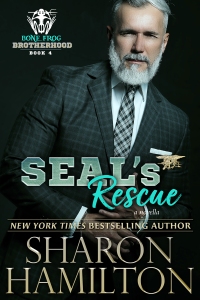 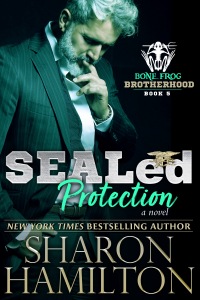 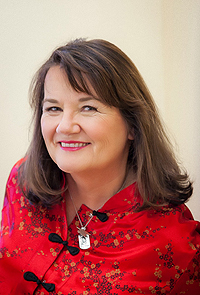 Sharon Hamilton is a NYT and USA Today bestselling author most known for her SEAL Brotherhood series.

Her Golden Vampires of Tuscany are not like any vamps you’ve read before, since they don’t have to go to ground, and can walk around in the full light of the sun.
Sharon’s Guardian Angels struggle with the human charges they are sent to save, often escaping their vanilla world of Heaven for the brief human one. You won’t find any of these beings in any Sunday school class.

All of Sharon’s books are available on eBooks (most formats), print and Audible.

A lifelong organic gardener, Sharon lives with her husband in the Wine Country of Northern California, where most of her stories take place. When she’s not writing, she’s getting verra verra dirty in the mud, or wandering Farmer’s Markets looking for new Heirloom varieties of vegetables and flowers.