Roman
I’m demanding. I’m strict. I get what I want.
And I want Lucy Neill.
She is mine.
She is my girl.
My little.
My life.
My world.
She just doesn’t know it yet.

Lucy
I lost my job.
I have no idea what I’m going to do next.
I should not be spending Friday night at a club.
I can’t help myself.
The club calls to me.
The owner calls to me.
I crave the forbidden.
I never realized how much I needed a daddy.

Lucy has been visiting Master Roman’s Club Surrender, she hasn’t played but has been observing and learning. As this book opens Lucy has lost her job, and instead of wallowing she decides to go to Surrender, one last hurrah. She has a visitors pass but without a job she won’t be able to afford membership.

Master Roman is a very dominant, very controlling, alpha male. I have to say I didn’t like the extremes he was going to in order to have Lucy near him, it seemed close to obsession.

Lucy on the other hand is curious about the lifestyle and seems to particularly enjoy watching scenes with age play.  With the opportunity to become Master Roman’s assistant at hand she applies then enjoys her last night at Surrender. She really never expected to get the job, but she does.

Master Roman controls his home the same as everything else in his life. He is a Dom 24/7. From her meals and transportation to and from the mansion, he is slowly dominating Lucy. She is reveling in the attention and as Roman learns more about her he realizes she never really had a childhood.

Lucy wants to please, and even though she shouldn’t she has interesting fantasies about her employer. Of course she doesn’t have a clue how he feels or that he’s planned all of this out.

The bus makes me nervous. Since I was dressed and ready to go earlier than necessary, I left my apartment and made my way to the bus stop. I’m going to stress about the bus every day, so I tell myself this way is better. If I get on the earlier bus each morning, I won’t have to worry about it being late or not coming at all.

This plan has a problem though. It’s dark outside. And probably not safe. In fact, a man drives by me slowly at one point, his window down, calling out to me. He laughs when I ignore him and pick up my pace.

There is no reason for me to wait for the bus I took yesterday, and as soon as I board an earlier one, I know I will prefer it. There are far fewer passengers. I don’t have to share my bench with a stranger.

I’m not nervous when I arrive at my stop. Even though it’s still dark, I’m in a better neighborhood. I walk as slowly as I can toward Master Roman’s home.

Nevertheless, I arrive at the ridiculous hour of six fifteen. I wait until six thirty to ring the bell, and am immediately buzzed in.

When I reach the rear entrance, Evelyn opens the door before I can reach for it. “Goodness gracious, girl. The sun is just peeking over the horizon. You don’t need to arrive this early every day.” She ushers me inside, and I close the door behind me.

“I couldn’t sleep, ma’am, and the bus makes me nervous. I don’t want to arrive late.” I have no idea why I’ve shared so much information with Evelyn, but she doesn’t seem annoyed.

She shoots me a smile as she returns to the kitchen island where she is already hard at work herself. I wonder if she lives here. Probably.

“Master Roman won’t like the idea of you wandering around outside in the dark. He’ll have a fit.”

I freeze in my spot. My face heats up as a flush rises. The last thing I want is for Master Roman to get involved in my transportation issues. I don’t want him to think for a moment that it’s a problem. I need this job. If he feels I don’t have adequate transportation, he might fire me.

I consider asking Evelyn to please not mention my problem to Master Roman but decide against it. It’s probably better to hope she lets it go or forgets. Tomorrow I’ll waste more time before I come into the house. After all, Master Roman’s mansion is not in a dangerous location. I could bring a book and sit outside the gate reading in the mornings before seven. I’m confident the streetlight will be sufficient to see the pages.

Of course this plan will only work during the summer. As soon as winter falls, I’m going to have an entirely new problem on my hands. But I’ll deal with that in the future. Hell, if I really manage to keep this job and make as much money as my contract implies, I will be able to take an Uber here instead of the bus. That will save me hours of stress and worry.

Taking a deep breath, I quietly shuffle down the hallway and enter Master Roman’s office. Like yesterday, the door is open.

Master Roman is standing behind his desk, looking for all the world as if he’s already been hard at work for hours. His brow is furrowed when he meets my gaze. “Did you take the bus to get here, Lucy?”

I swallow. How has he already learned of my situation? There is no way Evelyn could have informed him of my problem during my short walk from her kitchen to his office. “Yes, Sir. I don’t have a car.”

He crosses his arms and stares at me, lips pursed before he finally parts them again. “Don’t do it again. It’s not safe. It’s dark. You must have left practically in the middle of the night, and then you spent fifteen minutes pacing outside my gate before ringing in.”

I flinch. I lift my hand and nearly slap my own forehead as I realize there must be a camera outside. Of course there is. I stop myself from reacting just in time and lower my hand to my side.

Master Roman rounds the desk and then leans his butt against the front, arms still crossed. “Weston monitors my camera.”

“I see, Sir. I’m sorry to have bothered him. I didn’t want to come inside too early.” My voice is too low. I know I’m frustrating him. But he doesn’t realize his order to stop taking the bus would mean total disaster for me. I don’t have the means to afford other transportation, especially not until after I’m paid.

I knew this would be a problem as soon as it got cold or snowed, but I hadn’t anticipated facing the issue so soon. I can’t pay an Uber tomorrow. I don’t have even five dollars in cash until I get paid.

My hands are shaking, and I’m fighting against the flush and rising emotions. Part of me is about to cry. The last thing I want to do is tell my new boss that I can’t afford an Uber. He might think I’m wasteful if I don’t have enough money saved up for such things.

Master Roman narrows his gaze. “From now on Weston will pick you up in the morning and bring you home at night.”

Master Roman rounds his desk and lowers onto the seat.

I force myself to speak. “That’s not necessary, Sir. I don’t want to put him out.”

“You’re not. He’s my employee. He does what I instruct him to do.” Master Roman doesn’t look at me as he speaks. He has already grabbed his mouse. His attention is on his computer screen. “This discussion is over, Lucy. Go to your office. I left you plenty to do.”

I stare at him for a moment, uncertain about how I feel. Part of me is grateful. Most of me is unnerved. I need this job. If Master Roman decides the burden of getting me to his home isn’t worth it, he will fire me.

Finally, I shuffle across the room toward my office. The door is standing open. I leave it that way. Master Roman has never insinuated that I should close it. In fact, I’m confident he prefers to be able to keep an eye on me, and he likes to be able to call out to me easily.
Becca Jameson. Raising Lucy: Surrender, Book One (Kindle Locations 1186-1232). Becca Jameson Publishing.

In spite of his obsession, Master Roman clearly cares for Lucy and his friends are watchful.

The experimentation with different ages and the intensity of the attraction is evident on every page.

Even though age-play isn’t a favorite of mine, I enjoyed the insight and the journey the book take us on.

I look forward to seeing where Becca will take us next in this series. 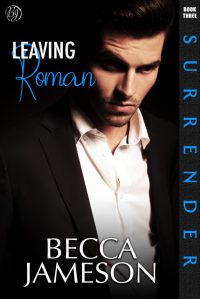