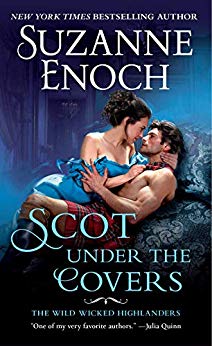 When a resourceful English lady
and a hot-blooded Highlander
join forces to trick a scoundrel,
every rule will be broken!

Miranda Harris is known for her charm, wit, and ability to solve any problem she encounters. But when her brother lands neck-deep in gambling debt to a crafty villain and Miranda is subsequently blackmailed into marrying him, she must enlist the help of the devil himself to save the family honor―and herself.

Devilishly handsome Highlander Aden MacTaggert knows next to nothing about the ways of the ton, but he most certainly knows his way around gaming halls and womens’ hearts. Still, Aden is not sure how he’ll manage to find a Sassenach bride in time to save his family’s inheritance. When his almost sister-in-law Miranda comes to him for assistance, he proposes a partnership: She will help him navigate London society and he’ll teach her everything about wagering…and winning back her freedom. The beautiful, clever lass intrigues Aden―but is she playing her own game, or are the sparks between them real? He is accustomed to risking his pocket. But betting on Miranda’s love is a game he can’t afford to lose. . .

Aden MacTaggert and his brothers have to find English brides, or they will lose their inheritance including their home in Scotland.

With one brother happily married, Aden and his eldest brother Coll are left with the daunting prospect of navigating the balls of London’s Social season.

Miranda Harris is sister to the man who is to marry Aden’s sister Eloise. She catches Aden’s eye the first time they meet. She isn’t like all the other fluttering maids, she’s outspoken and witty. She also has an extreme aversion to anyone who gambles. Rightly so, since her brother has managed to lose so much money, his only way out is for her to marry the man he owes.

The stray dog Aden adopts provides amusement, including convincing folks the female dog is a male.

This is a fun, intriguing romp, with danger, some sizzle and a lot of plotting and planning. If ever two people belong together it’s Aden and Miranda.

I have to go back and read the first book to see how Niall, their younger brother, met and married his lady. 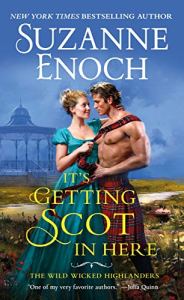 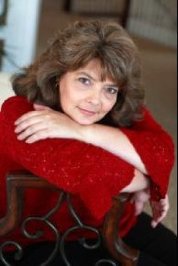 A lifelong lover of books, Suzanne Enoch has been writing them since she learned to read. She is the author of two well-received traditional Regencies, 24 and counting England-set Historical Romances, four contemporary Romantic Suspense novels, and a growing number of Scottish Highlands Historical Romances including the October 2016 release of HERO IN THE HIGHLANDS (Book One in the No Ordinary Hero trilogy).

A native and current resident of Southern California, Suzanne lives with a green parakeet named Kermit, some very chirpy finches, and a small army of Star Wars figures (including a life-size Yoda). Her books regularly appear on the New York Times and USA Today bestseller lists, and when she’s not busily working on her next book or staging fights with action figures, she likes to read, play video games, and go to the movies with her large and supportive village.