I am going to try and do all of these.
I’m not a big fan of biographies
so November might be an issue.

Here’s January’s Book with a Color in the title.

As the first Justice of the Arcana Council in two hundred years, Tarot-reading Sara Wilde is tasked with taking out the most dangerous magic-wielding criminals on the planet. Her first assignment? A killer known only as the Red King, who’s systematically picking off the world’s most gifted magicians in the rollicking streets and storied canals of Venice, Italy, on the eve of Carnevale.

Amidst the festival’s music, masks, and brightly colored costumes, Sara must unravel the truth about a brutal murderer from Venice’s own murky past, navigate the twisting political currents of magicians who seek to rival her own Council, and keep one costume change ahead of a conjurer whose lethal spells could end Justice–permanently. Good thing the diabolically sexy and deeply powerful Magician of the Arcana Council has Sara’s back…if only he didn’t hold so much of her heart as well.

The canals of Venice will run with blood when you deal in The Red King.

As Justice of the Arcane Council, Sara Wilde is sort of winging it. I got a kick out of the first time she entered her office, the boxes and chaos were everywhere. Even as she defeats some interesting characters who come in via the pneumonic system, the cases in order of importance are piled high. Her friend and partner Nikki has been sorting things out a bit, then there’s Mrs French, the caretaker and the boys.

The one she needs to concentrate on is hinted at by two drug dealers. They were dealing in a technoceutical called Black Elixir which is fatal after the fifth dose. They also pointed to someone called the Red King as the, pardon the pun, Kingpin. This leads Nikki and Sara to Venice where it appears the ‘Butcher of Venice’ has made a reappearance along with other references to said Red King.

With powerful magicians showing up for Carnevale the danger becomes obvious as some of the younger ones are murdered. It seems some caught in the wave of magic now have enhanced abilities raising their status within that community.

Sara noting the activity at the villa next to their host’s, decides they need to investigation. In doing so they discover far more than they anticipated.

“Something’s wrong. Energy’s changed,” she said in a way that wasn’t so much psychic smart as cop smart. Before her stint as a Vegas psychic, Nikki had spent a lot of years on the Chicago police force to hone that kind of instinct, and her eyes had gone flat and hard. “We need to go.”

“But shouldn’t we—” I didn’t have a chance to finish my words before the first startled shout went up. Even in their pleasantly impaired state, the crowd darted away like startled fish as a man half staggered, half fell out of the house and into the courtyard. He was enormous, wearing a luxurious feathered cape and a long beaked mask that showed his mouth beneath it, but that mouth was now open in a horrible grimace. His arms were stretched wide, his body writhing. He chased away any who came close.

“Dollface…” Nikki said quietly. She was already edging toward the door, which was an open maw to the street, with frightened partiers spilling out. No screaming, no shouting, no chaos, just a party gone very badly wrong and everyone wanting to cut their losses. The official staff were mostly frozen in place except for some of the bouncers, who were circling in on the feathered man with a mixture of reverence, fear, and, worst of all, surprise.

I stepped forward, and the man looked up, apparently watching me through the mask. It was an unnerving experience because though I could see his mouth, I couldn’t see his eyes. “You!” he gasped, his entire body stiffening.

“You were—supposed to come! To save me! It wasn’t…it wasn’t my time!”

He doubled over in a fit of the shakes, and I reflexively looked for the slash over his right temple, gleaming in silver. Only…it wasn’t there. Instead, his head was surrounded surrounded with a faint corona of glowing purple light—which was definitely not the same thing.

The guy might be a technoceutical pusher and a dirtbag in his own right, but he wasn’t marked for Justice.

This was the first murder of a magician attached to the senate and not the last.

We get to meet more of the council members and see more of Armaeus The Magician, Head of the Arcane Council, who is also Sara’s romantic interest.

Plenty of twists and turns, turmoil and death, suspense and a touch of romance as Sara with the help of Nikki, starts making her mark as Justice of the Arcane Council.

I will definitely be reading more of this series. 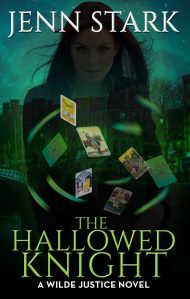 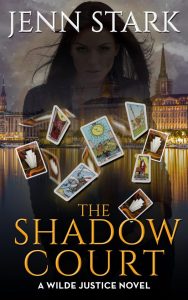 Jenn Stark is a Golden Heart award-winning author of paranormal romance and urban fantasy. She lives and writes in Ohio. . . and she definitely loves to write. 🙂 In addition to her urban fantasy Immortal Vegas and Wilde Justice series and her paranormal romance Demon Enforcers series, she is also author Jennifer McGowan, whose Maids of Honor series of Young Adult Elizabethan spy romances are published by Simon & Schuster, and author Jennifer Chance, whose Rule Breakers series of New Adult contemporary romances are published by Random House/LoveSwept and whose modern royals series, Gowns & Crowns, is now available.