Everything has come down to this…

Everything in Khloe with a K’s life changed when she crashed into the side of a food truck. Now with Earth in the rearview mirror, her future lies with Briggs, Goran, Reese, and Dalton. Forging their bonds was only the first step, but will it be enough to sustain them in the face of new challenges?

The stunning conclusion to the Heart of the Nebula trilogy.

*Please note*
This is a reverse harem and the authors suggest you always read the forwards in their books. This is the third and final in a trilogy.

Nothing like thwarting everything other people plan for you. Khloe is Queen and she’s not going to be bossed around. One of the first places she want’s to see is the waterfall. First though she has to meet a couple of people she missed the day before.

Having been up all night listening to her family history, she knows a lot more about these folks than they think she does. After the initial pleasantries she invites them to join her on her excursion to the falls.

As she absorbs not only the beauty but also the sad history, someone approaches Dalton thinks she should hear. This results in another excursion, this one to the part of the city called ‘The Below’. What they find there appalls her.

Instead, I turned to the brave young man who’d come all the way to bring me here. He’d been silent the whole trip over. “Can you show me?”

We were quite a parade making our way through The Below, and people came out to stare at us. Most of the population was just hanging around the streets, playing cards or simply sitting idly.

Briggs scowled. My visiting this crowded location probably wasn’t his favorite thing at the moment. But I imagined he’d never be thrilled when I risked unexpected exposure to elements he couldn’t control.

We should do this more often. Kieran didn’t rush, though the crowd seemed to thicken the deeper we went, and it impeded his progress until two of the guards moved ahead to help clear the way. Words fluttered after me.

“Make way for the royal guard!”

“Is that the queen?”

Other voices floated down, and I realized The Below wasn’t just on the ground, but stacked above were these precarious walkways between the upper levels of the buildings. It was like someone had built apartments into the massive stacks of containers on a container ship.

We were deep into the shadows now, and there was almost no sunlight. Artificial lamps glowed dimly along the walls, and the one nearest us sputtered. The hum and buzz reminded me of a bad fixture in the kitchen at the bar. Gradually, I realized everyone around me had stopped, and even the whispers quieted.

“Your Majesty?” Briggs was at my elbow, his voice low but urgent.

“One second,” I said, touching his arm gently and then moving toward the flickering light. The shadows danced around it, but worse, the constant buzzing was irritating as hell.

How did they sleep with it malfunctioning?

guards went to remove people in my path. “Stop. I just want to get to the light, no one has to be shoved.”

The pair hesitated, but they looked from me to Briggs, then back to the people facing us.

“Do you mind?” I asked an older man dressed in stained work clothing, or what I assumed had to be work clothing. His shirt had tattered edges, and the threading on his jacket was frayed. His eyebrows climbed at my question, and then, slowly, he shook his head and took a step back.

“Thank you,” I told him briskly. The crawling was worse down here; it was like that along most of the buildings, just sluggish little jerks. Pressing a hand to the wall, I ignored the cold, rough feeling of the metal. It was like touching something that had died.

Was the energy sluggish because it couldn’t move? Or was there just not enough?

“Um…” The young man edged closer to me. “Mostly always like this. Some are just out. No one replaces them anymore. Some of us have torches.”

No, the nanos were clear. Not fire. Flashlights.

Not much better, but definitely better.

“We’re used to it,” Kieran said, then cleared his throat. “I mean we endure, Your Majesty. This is not so bad.”

No, it was never so bad. The little things. You got used to it. Light bulb goes out and you can’t afford to replace it, or you only have a dimmer one, you make do. It becomes normal. Then you don’t realize what you’re missing anymore, because you endure.

I knew all about that.

I could feel energy, and I was practically full to bursting with it. The channels in the wall that carried power was a system of wiring, but I could touch this energy. It was as cold as the wall and barely able to kindle itself.

The buzzing needed to stop, and the only way to do that was break the light or fix it. It needed more power, so I reached. The energy fountained up within me, and I sent it right into the wall, into the wires and the channels. I pushed, shuttling through the channels. It fought me, resisted, but bit by bit, it gave way, and the light above me steadied and then began to brighten.

Beyond it, there were more clogged channels and shadows to chase. The clusters on my skin tightened and exploded outward in a shower of tingles against my flesh, and I pushed the energy through.

Maybe I couldn’t fix all their problems in a day, but they could damn well have light.

There were gasps all around me. Crowds walked toward us as the lights came on everywhere. Suddenly, The Below was as bright as anywhere I’d been.

“Look what she did.”

“The Queen made it light.”

“Khloe, the bringer of light.”

A boom sounded behind us, and we all whirled around. In under two seconds, Briggs was in front of me and so were the guards. I could see enough to know a group of men all wearing black stormed toward us.

“What do you think you’re doing here?”

I let the guys into my head. Whoever these people were, I needed to know.

Zylots. Briggs told me without ever looking at me. And they’re pissed.

I just bet they were. Briggs, let me through. I won’t hide from them, not in a first meeting.
Heather Long; Rebecca Royce. Throne Taker: Heart of the Nebula Book 3 (Kindle Locations 867-912).

The first encounter with the Zylots is enough to start Khloe thinking of another path for her reign.

Many decisions, a lofty goal, friends and enemies, and romance that doesn’t quit. I really hated to see this book end, I’d really love more of these characters. 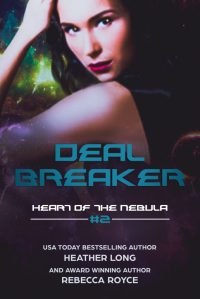 As a teenager, I would hide in my room to read my favorite romance novels when I was supposed to be doing my homework. I hope, these days, that my parents think it was worth it.I am the mother of three adorable boys and I am fortunate to be married to my best friend. I live in Austin Texas where I am determined to eat all the barbecue in town.