Jack Daniels Whiskey’s sole responsibility was to make sure the ranch operated at a profit and he was damn good at his job. That’s because he much preferred sitting behind a desk crunching numbers than dealing with people. He left that up to his brothers and sister. So, when he was tasked with helping the newest employee become assimilated to life on Whiskey Ranch, JD wanted nothing to do with the responsibility, much less the woman and her young toddler.

Only when Annette is injured by one of the horses, JD finds himself having to help take care of Tony…

The last thing Annette Hannah wanted to be to anyone again was a burden. She’d done that to her brother time and time again. All she wanted was a fresh start for her, and her son and the Whiskey family had given her that chance. Working as a horse trainer, she wanted to impress her new bosses, but the wild horse had other plans, and Annette ended up in the ER with a broken wrist and a sprained ankle. Once again, she had to rely on someone else. Only this time, it came in the form of the sexy, but reserved and emotionally unavailable, JD Whiskey.

When Annette no longer needs JD, will he be able to walk away, or will people have become more important than numbers, and will Annette allow the cowboy into her and her son’s heart?

Jack Daniels ‘JD’ Whiskey has been tasked with training Annette, the potential new manager of the horse training and riding school. Ordinarily he doesn’t have a lot to say, but suddenly he does.

Annette is Luke’s sister and she is looking forward to working with the horses on the Whiskey Ranch. Unfortunately the current manager Ron and his sidekick Larry aren’t very happy with her being on staff and JD steps in to do her orientation.

A couple of things happen early in this book regarding some new mustangs brought in to be trained. It’s thanks to some of the stunts her late ex-husband pulled that alerts Annette to something not being right, she just can’t figure out what.

After separating two of the horses from the rest, Annette and JD enter the pen. Only someone didn’t listen when JD told him to go home.

That said, there were a few he enjoyed training but had to let go for various reasons. He got a sinking feeling that Stormy was actually Patch, a horse he’d trained about two years ago and sold to, of all people, Bella Brothers. Would that family ever get their claws out of the Whiskey family?

Patch kept his gaze locked with JD as he inched closer.

JD didn’t move, leaving his palm flat while Patch took the pieces of apple from his hand.

Meanwhile, Coco nervously paced at the backside of the fence, stopping every once in a while to kick his hind legs against the fence.

“You were right; I know this horse.” Without making sudden movements, JD lifted his other hand and gently scratched Patch’s nose. “What’s going on with you?”

“What do you mean?” JD didn’t want to tear his gaze from Patch in fear of losing his trust.

“Five o’clock. There is someone behind the—”

Suddenly, Coco lowered his head all the way to the ground before raising his front legs high in the air. Patch did a quick three-sixty before taking off in a full gallop toward Coco.

“Jump the fence,” JD said as calmly as he could while he raced toward Annette.

Patch got between Annette and Coco, but Annette still took a good swift kick in the side before crawling under the fence.

JD flipped himself over the top railing, landed on his feet, and helped her to a standing position. “Are you okay?”

“This time I’d say my body is more bruised than my ego.”

A noise behind the barn caught his attention. “You stay put. Got it?”

“Sure thing,” she mumbled.

He took off jogging around the east side of the pen, that way he could come around the top side of the barn. If someone had been back there, and someone managed to spook the horses, JD would be able to see them even if they tried to run in any direction.

Slowing his pace, he creeped around the corner, and his blood boiled.

Only question is how did he spook the horses?

Or better yet, why does he have two tamed mustangs in a lot of wild ones?

JD leaned against the barn and watched Ron slink between bushes and trees, letting him get away, though not without snapping a few images on his phone first. He waited until he watched Ron slip into his pickup about a mile away before turning and heading back to the pen where panic gripped his heart.

Annette stood inside the pen, only two feet from Patch.

Quickly, he scanned the immediate area and let out a sigh of relief when he saw Coco locked in the holding stall. With a calmer heartbeat, JD continued down the path until he came to the holding stall. Coco glanced up at him with pain in his big brown eyes.

JD snagged some apple slices and stretched out his arm. Reluctantly, Coco took them from his hands. “You poor thing,” he whispered.

Annette had Patch in a nose hug, which made JD nervous. But it also sent his mind down a dangerous path. “We did have company, and it was Ron.”

“I know he’s been here forever, and I’m a nobody on this ranch, but I don’t trust him.”

“As of this moment, I don’t either, and I’m going to need to have a chat with Georgia Moon and JB tonight. For now, we don’t say anything to anyone else until we know more.”

“I agree.” She continued to rub and scratch Patch as if they were old friends.

“I know. But he saved me from getting trampled over by that one. I think he’s reacting to something.”

“Fear wouldn’t necessarily make them act as if they were in pain, and that is exactly how they are behaving.” She slipped from the pen and leaned against the fence, resting her hand on his thigh and staring up at him with pleading blue eyes. “I want to have them examined from head to toe, and I want to be there when the vet does it. Or at the very least, I don’t want Ron to be anywhere near them.”

“I’ll make that happen.” He pulled his cell phone from his back pocket. “I’ll have the horses taken over to my personal barn, and you and I will deal with this in the morning.”

He jumped from the fence. “For what?”

“For trusting and believing in me.”
Talty, Jen. Jack Daniel’s (It’s all in the Whiskey Book 3). Jupiter Press. Kindle Locations (566-601). Kindle Edition.

Now JD has noticed something rather startling, he is genuinely interested in her. Not as his usual type one night thing and that scares him. Especially since she has a son and he doesn’t want anything to do with kids.

The attraction is mutual and it’s quite the journey for realization to hit them both.

In spite of being a short book, there is plenty of intrigue, people showing up that shouldn’t, accidents that aren’t and a simmer to sizzle relationship. 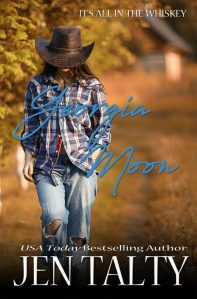