A Charity Anthology for Australia 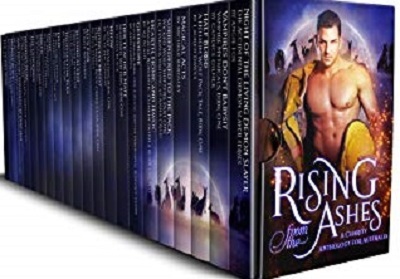 Love will always rise.
Rising From the Ashes is
a Charity Anthology and
a labor of love.
All proceeds will go directly
to Australia’s State Emergency Relief Fund and WIRES,
an Australian Wildlife Information,
Rescue, and Education Service.

We’ve assembled a delectable collection of amazing romance and fantasy by New York Times, USA Today, and other bestselling authors. We hail from many countries, and we’ve joined together to help Australia recover from its devastating fires. Everything from stories to cover art to formatting has been donated.

This limited-edition omnibus includes fantasy and romances of all genres, with hot men and strong women. Every single book proves love and perseverance and grit really do conquer all.

Thanking you in advance for your kindness and generosity supporting Rising From the Ashes. You’ll find some new-to-you authors that will make your day.

Since I’m not sure how long this will be available I decided to post reviews for these full length novels individually. I am thoroughly enjoying each and every one, finding new authors along the way.

Here is the first one! Don’t miss this Anthology it’s amazing!!! 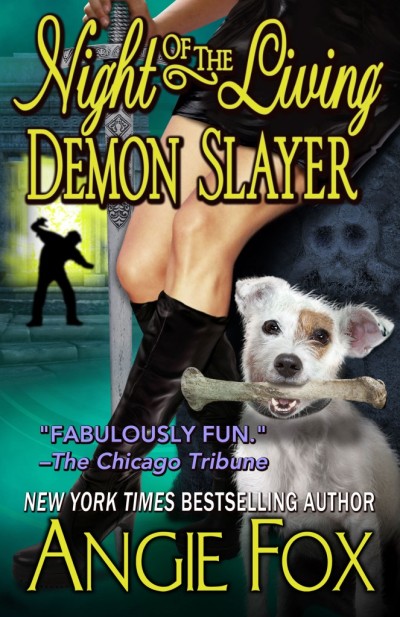 Lizzie Brown is all for letting the good times roll…until a dark voodoo church rises up in the bayou outside of New Orleans. Now the ritual fires are burning long into the night and the dead are having a hard time staying that way.

Lizzie goes in undercover to put a stop to the madness. Good thing she’s got her sexy shape-shifter husband behind her, as well as her Grandma’s gang of biker witches. Too bad nobody’s watching Pirate the dog, who has become way too friendly with the phantom haunting a long-forgotten Victorian séance room.

Secrets and spirits abound. Nothing is what it seems. And when legions of the dead threaten the city, there may be no stopping them.

This book is the middle of an on going series and it had me hooked from the first page.

Lizzy is a demon slayer married to Dimitri, a powerful griffin and she’s related to a Coven of biker witches. I love her pets a white dragon named Flappy and a talking dog named Pirate they are an interesting pair.

A favorite scene is the start of the scary and interesting stuff.

“The ball, Flappy,” I said, pointing, “right there. By the fence.” It lay in the dirt about six feet from where he’d dug the helmet out of the bush—a large, red ball. You couldn’t miss it.

The big dragon trundled off.

“It’s not his fault he can’t see color,” my dog pointed out. “Look for something round!” Pirate called.

The dragon broke into a run, flapping his wings. Before I knew it, he’d taken off. He flew over the fence and circled the hotel. So much for staying focused.

“You could try to fetch as well,” I suggested to Pirate. It had been his idea to teach the dragon tricks. I didn’t know why my dog was outsourcing. “You like bringing me balls and sticks. Maybe you can show Flappy where to look.”

Pirate sat down instead. “Ah, well, I fetched me some of those leftover lemon squares when Bob wasn’t looking. Now I don’t feel so hot.” He stood, tail up. “Ohh…look what Flappy has now.”

The snaggletoothed beast kicked up a small dust storm as he landed. He let out a happy grunt and began lumbering up to us, his mouth full of a gnarled mass of twigs and cloth and I didn’t know what.

“Yuck,” I said, even before I realized it was covered in dragon spit. “Flappy, drop it.”

The dragon laid it at my feet and I took an instinctive step back. I detected the sharp, musty tang of rotten meat.

A bundle of sticks tied with black twine formed a pentagram. Lashed to the center, a crude human form squirmed as if it were alive.

“That’s even better than a ball!” Pirate gushed, ready to pounce.

“Not so fast,” I said, picking him up. I glanced around the courtyard. We were pretty much by ourselves.

At best, some poor animal could be trapped in the center of that pentagram. At worst…

I bent down for a closer look. This time, the bundle at my feet appeared dead enough. Maybe I was just tired.

The dragon stood over it, panting and happy. Surely his magical animal instincts would tell him if something were off.

I forced some cheer into my voice. “Did you bring me a prize?” I didn’t think dragons were like cats, rewarding their owners with less-than-savory trophies from a kill, but I had no clue what this could be. The witches hadn’t put it together. Or at least it didn’t look like anything I’d ever seen before.

The body in the center consisted of a head-like knot of burlap with a halo of colorful feathers sewn into the crown. A wad of faded yellow cloth formed the body. Poking from it, gnarled sticks made for crude arms and legs.

A faint crackle arose from it, like branches catching fire.

“Yeah, that’s bad,” I muttered as the large, tear-shaped emerald at my throat prickled with energy. My husband had gifted me with the stone and its bronze chain when we first met. The necklace was loaded with defensive magic and tended to help me out when I needed it. For the time being, though, it held back. Even my emerald didn’t know what to make of this thing.

Frieda had gone inside. She’d probably needed to dry off. Ant Eater and Edwina lingered near the back, under the roof by the vending machines, discussing the table full of spells they’d brewed at the ritual last night. Each recycled jelly jar sparkled with pink and yellow magic meant to dispel the darkness. At this rate, I’d need to borrow one.

Pirate squirmed in my arms, trying to get a better look at the object Flappy found. “You want me to eat it?” he offered. “I’m full, but I can make room, no problem.”

“No.” In fact, I got the distinct feeling it had been watching us. Two black stones glistened on the head of the doll lashed to the sticks. They seemed to follow my every movement. “Go get Grandma.” And then, because I really didn’t want him back, “After that, take Flappy to my room and you can both jump on the bed.”

Pirate lit up. “Get out of town!” He knew as well as I that I never let Flappy inside, much less near my pillow, much less…never mind.

It was a small price to pay. “See if you can jump as high as the ceiling,” I said before I thought better of it.

At least Pirate would be safe. “Yyyyes!” my dog said, with the joy only animals possess. He ran like greased lightning, Flappy in his wake.

He pawed at room 102. “Lizzie wants you!” he said to Grandma as she opened the door. “It’s something smelly!” he added over his shoulder as he dashed down the row of rooms. I’d kept my door propped open for fresh air. Pirate nudged it the rest of the way, dashing in ahead of the dragon.

Grandma stood in the doorway to her room, perplexed. She still wore her leather chaps and a black T-shirt from last night. The words Kiss My Asphalt curled in silver across her chest. Her long gray hair tangled around her shoulders, uncombed, and black circles lingered under her eyes. She’d had fun.

“We’ve got a problem,” I called, motioning her over.
Gimpel, Ann. Rising From the Ashes: A Charity Anthology for Australia . Ann Gimpel Books, LLC. Kindle Locations (528-574). Kindle Edition.

Now a dragon playing fetch is quite amusing, as is the lazy dog. However, what the dragon brought back was scary and when Evan Christopher, the person who created it showed up it starts a very scary, interesting and fun tale.

Voodoo, rituals, black souls and so much more will have you turning the pages.

I really have to go to the beginning of this series to get the details on all of these really awesome characters. 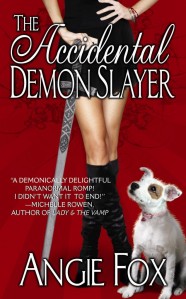 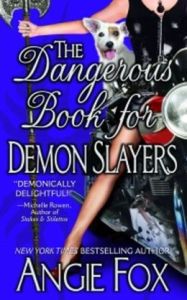 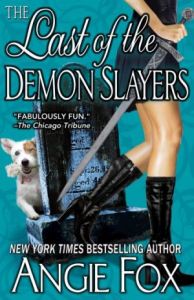 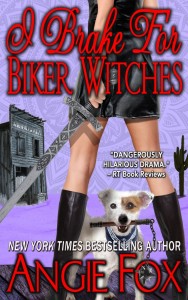 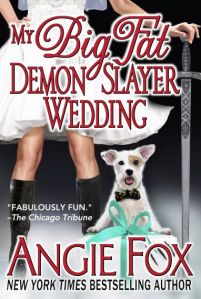 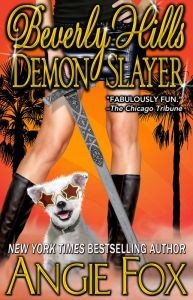 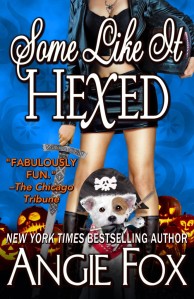 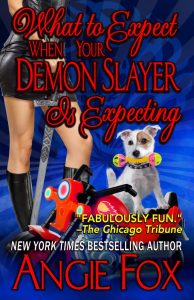 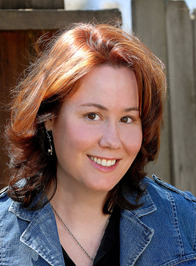 New York Times and USA Today bestselling author Angie Fox writes sweet, fun, action-packed mysteries. Her characters are clever and fearless, but in real life, Angie is afraid of basements, bees, and going up stairs when it is dark behind her. Let’s face it. Angie wouldn’t last five minutes in one of her books.

Angie is best known for her SOUTHERN SPIRITS mysteries, and for her ACCIDENTAL DEMON SLAYER books.