A Charity Anthology for Australia

Love will always rise.
Rising From the Ashes is
a Charity Anthology and
a labor of love.
All proceeds will go directly to
Australia’s State Emergency Relief Fund and WIRES,
an Australian Wildlife Information,
Rescue, and Education Service.

We’ve assembled a delectable collection of amazing romance and fantasy by New York Times, USA Today, and other bestselling authors. We hail from many countries, and we’ve joined together to help Australia recover from its devastating fires. Everything from stories to cover art to formatting has been donated.

This limited-edition omnibus includes fantasy and romances of all genres, with hot men and strong women. Every single book proves love and perseverance and grit really do conquer all.

Thanking you in advance for your kindness and generosity supporting Rising From the Ashes. You’ll find some new-to-you authors that will make your day.

Since I’m not sure how long this will be available I decided to post reviews for these full length novels individually. I am thoroughly enjoying each and every one, finding new authors along the way.

Here is the second one! Don’t miss this Anthology it’s amazing!!!

Surviving should have been enough.
It wasn’t.

Jake Reynolds and his fellow vampires survived the slaughter of their master, Melios, at the hands of the Immortal Knights Templar.

Call it luck. Call it fate. Call it whatever the hell you want.

Jake just knows that he should have been dead—another pile of sooty ash on the ground. Now he must find his place in the mythical world—vampires aren’t all that’s out there.

Even his doctor is a super-hot werewolf. He’s not even sure if he should find her sexy, but he does. And he wants to see if wolves and vamps are compatible.

In all the ways.

But the world’s a chaotic mess, and he’s been tasked to help fix it. Penance for previous crimes. They do what they’re told, and go where they have to, learning to live without being monsters among men. And kick ass, occasionally, in the name of Jackstone Foundation.

But when The Kid—Melios’s pet—needs help, Jake will not leave her out in the cold. She fed him too many times on the sly to leave her hanging now.

Mythicals are coming for her. And it’s up to Jake to keep her safe.

But what can one lone vampire do against an army and an ancient bloodline?

*A spin-off series from the Mythical Knights Series

The Knight’s Templar don’t take prisoners, but for some reason these six vampires have been saved. Now they are awaking from the coma they’ve been in since their maker Melios was killed. They are ‘young’ vampires but they were once military and part of Melios’ army.

Now they are starting to wake and it’s time to see if they can live. They are being kept in a facility run by the Jackstone Foundation that helps humans who have been hurt by mysticals and help mysticals relocate or needing medical assistance. The Vampires are another story a chaos ensues.

Two of the waking vampires had run as soon as they woke, Travis Collins and Joanie Alekhine had always done everything together. As Jake Reynolds wakes there’s a lot more commotion, he sees the others that had been under his command with him in the room. Issac Malcolm, Edward Thompson, and Deke Smith. It was Deke causing the ruckus and Jake couldn’t seem to get him to listen before he bit the nurse who had been tending them.

Everyone, Jake included, turned and saw a new woman—a doctor, by the way she dressed—wrap her arm around the nurse, and she guided the woman to the door.

“Who the hell are you to tell me what to do?” Deke growled.

The woman looked like she wanted to scream. And if Jake wasn’t mistaken, her face morphed for just a second, elongating, then it stopped.

“I got this, Doc,” said another woman as she walked through the door. She had short spikey red hair and dark circles under her eyes. Thin. Short. Sword in hand. Guns strapped to her waist. Body armor.

She might have been considered a cute, petite thing, but her energy was, well, broken or something.

Jake Reynolds had seen a lot of shit. Especially when Melios took him to some weird-assed places he’d never knew existed.

There was something way off about her. Like way, way off.

The woman shoved Travis Collins and Joanie Alekhine into the room. “Here. You lost something, Doc.”

Both Collins and Alekhine were bound by what looked to be thin silver chains. And neither one seemed particularly happy about being brought back. Travis had a black eye. Joanie looked like she’d been punched a few times herself.

“You can’t do this to us. You can’t hold us like prisoners,” Alekhine said.

The woman looked at Joanie. “Actually, I can.” She waved the sword particularly close to Joanie’s face.

Joanie’s eyes scraped over the blade, and she stood up straighter.

“Thanks,” the doctor said and proceeded to release the chains. The skin looked scorched where the chains had rested on them.

The redhead gave the doctor side-eye, then glanced at the group. She rolled her wrist, making her katana flash in the light, showing exactly how wickedly sharp it was.

She looked at all of them like she was about to start a lecture.

“Is it monologue time?” Malcomb whispered.

Pretty sure the redhead with the sword heard it all.

“Now, kids. Here’s the deal. You do what I say without question, and we’ll all get along just fine.”

“Who are you?” Jake asked. “Where’s Melios?” He didn’t like throwing that out, but in the past, if he and his team ever got into trouble, just bringing up Melios’s name was enough to get them out of it.

She raised her eyebrow. “A pile of sooty ash blowing in the wind.”

The words slammed into him. While Melios was a fucked-up bastard, he was Jake’s sire—Jake’s maker. He made every one of them.

Even if the sire was horrible, it was hard to believe that he was actually dead. Melios had been alive for hundreds of years. Nothing should have been able to kill him.

Jake shook his head, trying to wrap his mind around it.

The redhead didn’t seem to notice or care. “You vampires are alive at my discretion. You continue to breathe, at my permission.”

Deke stepped forward, their differences in size was almost comical. Blood ran down Deke’s face, making him look even more the monster. “You’re not the boss of me, little girl.”

She turned directly to Deke Smith.

They were separated by a good thirty feet.

She reappeared directly in front of him, like a phantasm. She was barely corporeal when she pulled up her sword.

And shoved it straight through Deke’s chest.

In slow motion, Jake swore he could see each inch of the blade, shining in the bright white of the room as she pulled the sword back. T

hen, both slowly, yet still in a blink, Deke Smith disappeared in a puff of ash.

Both slow and fast.

But it was real.

The gray soot that suddenly hung in the room was Deke not a minute before.

The dust floated in the air, a horrible haze in the otherwise white room.

She glanced at each one of them in turn. “I’m Eve Harrison. And I will kill any one of you fuckers in a blink because I Do. Not. Care. About any of you. You will do as you’re told, or you will die.” She took a step away from where Deke had just been standing.

She didn’t bother wiping it off.

“Shove it up your ass.” She glanced around the room, glaring at everyone. “First order of business. Clean this room. You dumb bastards tore it apart. It will be so pristine; I can eat off it. You have one hour. Move.”

And with that, Eve Harrison walked out of the room.

The vampires glanced at each other.

Now there was someone else Melios held as a pet, a teenage girl. She often snuck to feed these young vampires when Melios would rather starve them. It’s this young woman that the Knights Templar are now trying to protect and being overwhelmed by vampires at every turn.

In the meantime as Eve works with the 5 remaining vampires, Jake and the werewolf doctor Megan seem to have an attraction. She also starts visiting him in her wolf form which leads to some very interesting scenes.

When Richard a Knight Templar shows up wanted Eve to watch over the kid, Jake recognizes her and volunteers to help. Kid or Child, no name, but Jake and his team know her well.

This book heats up with plenty of action as this take with the Child unfolds and the romance between Megan and Jake, sizzles off the pages.

I absolutely need to continue this series. 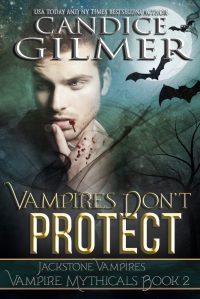 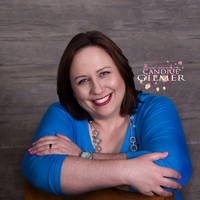 Candice GilmerUSA Today and NY Times bestselling author Candice Gilmer leads a dangerous double life as a mommy and a writer. In between boo-boo healing and fixing broken toys, she writes stories usually to the tune of children’s television shows.

Growing up in the Midwest, Candice stays close to her family, especially the ones with basements when the tornadoes come around.

All in all, she stays very busy, but really, she wouldn’t have it any other way.