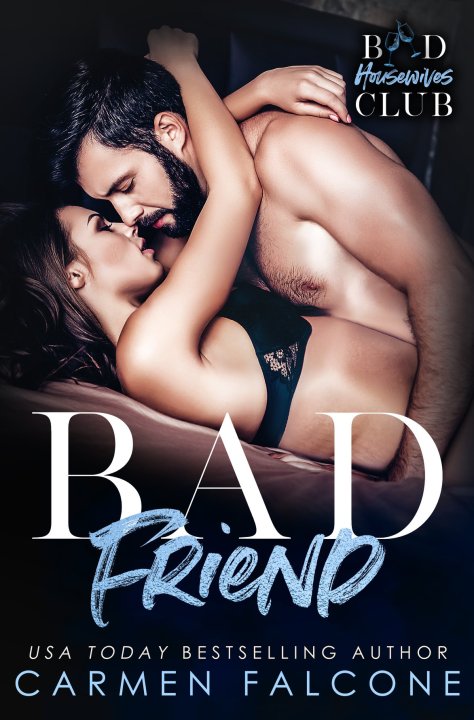 Single mom Brit wants a boyfriend, more money and a better life for her and her son—but not in this order. Knowing her track record with men, she hopes to boost her make-up artist career by attending a coveted convention. Too bad the cost is too high—unless she agrees to temporarily work for the hottest man in town, AKA her best friend’s ex-husband. Nothing can go wrong, right?

Damian’s life is a mess—his wife abandoned him, leaving him to balance his busy surgical career and raise their two children alone. Still, he’s determined to open his charity hospital for burn victims—a promise he’d made to his mother. Overwhelmed, he proposes Brit help him get his life on track as he persuades his investor to bankroll his dream. He’s got a hands-off policy with all his employees, but once nighttime falls, she becomes a forbidden temptation he can’t resist.

Eight months ago, Violet left her husband Damien and her two children, Trevor and Amanda, in the middle of the night with only a note saying she wanted a divorce and was getting help on the east coast. Her friends Brittany, Lara and Nikki had taken to helping Damien out when they could. It was easier for Brittany, a single mom, so she was there frequently.

Brit’s daughter Libby and Amanda are friends and play well together often having sleepovers when Damien was called in at night for surgery. The book opens with one of those nights. To her embarrassment, on their arrival Brit’s car dies. Unlike the others in their Bad Housewives Club her finances were a lot tighter.

When Damien returns that night, he offers to pay her for all the time she’s put in with his children and she refuses. He then comes up with a better plan.

Once inside, she chose an oversize chair at front, facing the blank projection canvas. He picked an ottoman and pushed it so he sat in front of her. Damn it. Staring into his hazel eyes would make everything so much harder.

“I’ve been thinking on the way back home about how wonderful you’ve been with the kids.”

She swallowed. That’s how these conversations always start. “Thanks.”

“I’ve taken you for granted. I guess I was on survival mode, being the main caretaker after Violet left. I can afford help, but the kids love seeing you more than the housekeeper or regular nanny.”

She waved him off, adamant on not telling him how the kids abhorred all the old-fashioned rules the regular nanny Mrs. Smith put in place. She figured she’d talk to the old lady and give her some pointers without getting her in trouble. “Hey. No sweat.”

“So I’d like to make it up to you. I’ll write you a check with a ballpark figure of all the hours you put in.”

She shifted on her seat. Maybe she was broke, but not enough to accept charity after he’d seen her dead car. Embarrassment flowed through her, warming her cheeks and neck. “Absolutely not. Listen, I helped as Lara and Nikki have. Violet was— is— one of us, and we love your children.” Accepting money now would negate all the help she’d done to her friend. Worse, would make her an official charity case.

She swallowed, feeling her pulse drum at the base of her throat. “This is about my car, isn’t it?” she asked him even if the question clawed her heart and then clenched it tighter for good measure.

“I want to help you as you’ve helped me.”

She bit her inner cheek. “I appreciate, but I’m okay. My hours have been cut at the store, and—

He touched her elbow, forcing her to look at him, and the light brush of his fingers on her bare flesh sent a scorching sensation up her arm then to other places she’d rather forget. At least for right now. When she arrived home and took a bubble bath, she’d certainly remember it.

“Well, then I have another proposition for you. Why don’t you give me those hours you lost and work for me when you’re available?”

She withdrew. “Work for you?”

“Yes, as my personal assistant. I’m behind in a lot of things on my life, and I’d love someone as reliable as you to help me out. It may be with the kids, or involve some filing paperwork at the clinic which my current medical assistant doesn’t seem to ever get done.”

“I’m flexible. And you can drive the Land Rover while you work for me. Used to belong to Violet. I need to make sure you’re safe while running errands.”

She stared at him, her lips parting but no sound escaping them. A lump lodged in her throat, pulsing with anticipation. The idea wasn’t that bad… he’d probably only need her temporarily, maybe just until the same time the movement picked up again at the store. And she could use the money to pay for the conference she’d been dying to attend. When he yanked her from her thoughts to announce her hourly rate, she almost fainted. “That’s a lot,” she said. She didn’t know how much assistants charged these days, but the number he gave her was more than double what she made at the store.

He winked at her, and her insides melted like snow under the hot sun. “I’m a demanding boss.”

She bit back a smile. “Alright. Thank you for the opportunity, I’ll take it.”

“You’re welcome.” He clinked his beer bottle on hers, then lifted it to his mouth and took a swig.
Carmen Falcone. Bad Friend: Bad Housewives Club, Book 2 (Kindle Locations 191-219).

Working part-time for Damien puts them in close quarters and the attraction between them grows.

Although he is not yet divorced, he is confident he would soon have those papers in hand and this attraction turns into sizzling heat rather quickly.

I love the twists in this book and Damien and Brit make a great couple.

I can’t wait to see what’s next for this group of friends!