She broke his heart.
Now she’s back.

When Win Lisle walked out on him five months ago, Angus McBride hardened his heart and committed to marrying a stranger to save Base Camp, the sustainable community he came to Montana to build. Now there’s just over a month until his wedding, he knows he can never love his backup bride, Leslie, and Win has come back—pregnant with his baby. What’s a Navy SEAL to do?

Five months ago, Win panicked. Faced with a positive pregnancy test and a choice—Angus or her family—she chose her family. After all, they once gave up everything for her. She’s regretted the decision ever since, and now she’s back, ready to commit to Angus forever—but Angus has a new fiancée who’s got no intention of giving him up.

Angus wants Win—bad, but Leslie wants her happily-ever-after and she’s not afraid to play dirty to get it. In this race to the altar, will anyone find happiness?

It’s down to Angus and Walker, they are the last two that need to fulfill the marriage requirement set by Fulsom. Both men have obstacles to make it to the alter.

For Angus, he’s still in love with Win. She told him she was leaving because her mother was ill, but it was so much more than that.

For Walker, he’s still annoyed about Avery stealing things, but there’s also the problem of an arranged marriage to be solved.

Of course Fulsom has added a requirement, whoever gets the short straw this time, has to date a ‘backup’ bride and give her a real chance to become the bride. The woman has already been chosen and would arrive the day after Renata and Greg’s wedding.

Angus drew the short straw, with Win gone he really doesn’t have much of a choice, he’s going to date the backup bride Leslie and if need be, marry her.

It’s at the wedding reception that things look up, Win is back. However there is still the back up bride and Angus’ agreement to date her for thirty days. If he doesn’t they lose everything.

“Thanks for the ride—and the dress,” Win told Alice Reed as they stood on the front steps of the manor. Despite the cool night air and the imposing building’s closed windows, strains of music were audible from inside. Greg and Renata’s wedding reception was in full swing. Win was sorry to have missed the ceremony, but she hadn’t wanted to disrupt it. She’d planned to wait until the reception was over to return to Base Camp, but Alice, who’d put her up late last night when Win appeared without notice at Two Willows, had urged her to jump right into the fray and had driven home after the ceremony to pick up Win and take her to the reception. “This way everyone will learn at the same time that you’re back,” she said.

“Of course,” Alice said now. “You look wonderful in that gown. Angus will be so pleased to see you’re back.”

Win wished she was as sure about that as Alice sounded. Now that she was here, she’d begun to imagine all the things that could go wrong. Angus must be angry with her—

“Come on. Let’s get this over with.” Alice opened the door and stepped inside, inside, tugging Win along with her into the manor’s front hall. It was crowded, and more than one person gasped as they noticed who had entered.

Whispers rocketed through the room, and by the time they managed to find a place to store their coats, she was sure people in the ballroom had heard the news.

“You can do this,” Alice whispered.

Win squared her shoulders. Time to face the music. For the first time in months she stopped sucking in her stomach and trying to hide her pregnancy. Alice had chosen a gown that called attention to her belly rather than minimized it.

“You look beautiful,” Alice assured her again. “Come on.” She put an arm around Win’s shoulders and guided her through the onlookers into the ballroom. In one area a band played and couples danced. Tables were spaced around the room. Someone was serving drinks from a bar.

“There,” Alice said and pointed. Angus was standing with Avery and Walker near the dessert table, a plate of cheesecake in his hands. Win noticed that Walker had his gaze pinned on Avery, but Avery kept her attention carefully elsewhere. Win’s heart went out to her; she’d had her feelings hurt badly recently if the show was anything to go by. Win had told herself every week not to watch Base Camp, but every week she did. She knew enough to feel she could read between the lines, even of the episodes Clem Bailey had directed. Avery’s eyes were hollow. Walker looked like he’d been left out in the cold with the bison herd he and Avery tended. Win hoped they managed to patch things up soon.

Avery was the first to spot Win. She stiffened and said something to Angus, who turned around.

A wash of ice-cold fear rushed through Win as he met her gaze. She held her breath. Would he say hello or walk away?

No secrets, she reminded herself. She turned a little to make it easier to notice her belly. Smoothed a hand over the small curve of it. Looked him in the eye and nodded. Yes, she was pregnant. Yes, the baby was his.

She would never know who moved first, but a moment later, she was pushing through the crowd, unable to wait a second longer to hear his voice—feel his touch. Cameramen pressed around them, jostling to get footage of their reunion, but she didn’t care.

“Angus.” Could he hear all she meant to say in that one word?

“I’m sorry.” That was all she could manage before tears clogged her throat and blurred her vision.

Because Angus pulled her into his arms and kissed her for all he was worth.
Seton, Cora. A SEAL’s Struggle (SEALs of Chance Creek Book 9). One Acre Press. Kindle Locations (795-824). Kindle Edition.

When we meet Leslie let me just say I wanted to slap her silly and not only because she’s there to marry Angus, the woman doesn’t stop talking.

Her first meeting with Win was as interesting as it was one sided, on Leslie’s part. The woman can babble like there’s no tomorrow. The woman is also determined to get Angus to the altar.

Plenty of twists and turns add to the story and the undeniable love between Angus and Win just keeps shining through. A couple of major surprises and of course there’s plenty of heat.

In spite of the fact this series will be ending I can’t wait for the next book! 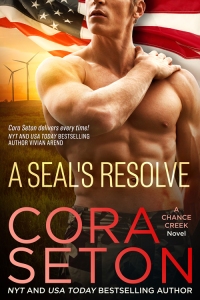 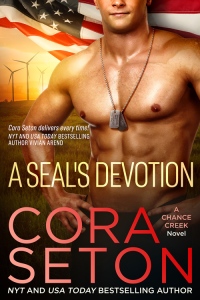 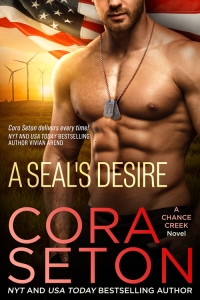