The Paranormal Prison Series is a Multi-Author experience within the same prison, Nightmare Penitentiary aka NP. The characters are different but the venue is the same. A wonderful way to discover new Authors. 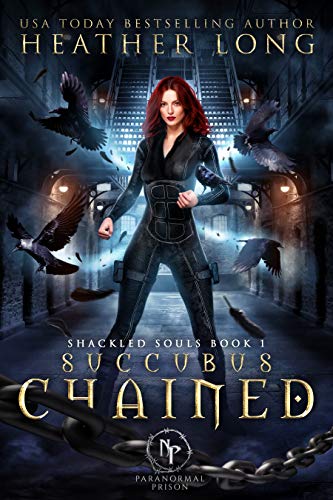 I bet you’re asking yourself why am I here?
What happened that landed me in this cell?
Trust me, you aren’t the only one.

You’d do better to ask, what am I?

NOTE:
*Please note this is a paranormal prison reverse harem and will feature aggressively snarky characters, a bit of twisted humor and a lot of passion. So come join an amazing group of authors in Nightmare Penitentiary, a place you’ll never want to escape from. The author suggests you should always read the forward in her books. This is the first in a trilogy.

Fiona is a succubus who had the bad judgement to engage with a hungry vampire. When he thinks he’s killed her he tries to save her and creates the impossible. A Hybrid, An Abomination.

The Vampire Prince sends her to Nightmare Penitentiary, with the intent of her never getting out.

Fiona isn’t drinking the blood they try to feed her, she only feeds when the Warden visits her and she feeds both her succubus nature and the vampire although the later under protest.

Fiona hasn’t asked to be rescued, she has more or less resigned herself to the fact she isn’t going anywhere anytime soon. Then a ‘guard’ shows up and expects her to just go with him.

Frustration filled his eyes. “Why are you being difficult?”

Was he for real?

“You descending to the darkest parts of the penitentiary, where even the most dangerous hunters would be loathe to go.”

“Cool, you run along then.” Dammit, I knew I should have gone up.

He let out aggrieved sigh. “Not without you.”

“Why the fuck didn’t you say that upstairs instead of getting all monosyllabic and snarly?”

“Because you smell like another man, he’s been all over you.” He tilted my head to the side and then stroked his thumb over my throat. Told you Dorran liked to mark me. “He’s done it recently, too. Are you sure you won’t tell me who?”

Not really, but I didn’t know this guy, and rescue or not, I was not in the mood for this crap.

His lips compressed into a thin line, and he dropped his hand from my throat. When he backed up a single step and gave me room to breathe, I narrowed my eyes. That was an unexpected twist. Reaching behind him, he pulled out a pair of shackles, and I glared at him.

“You have to,” he said. “I’m a guard. I can get you out if I escort you. But prisoners are not allowed to roam freely.”

“No.” I folded my arms. I was not going to put those on willing.

“I will take them off, Fiona. I promise.” The growl underscoring each syllable didn’t inspire confidence.

“I don’t even know you, why would your promise mean shit to me?”

“My name is Maddox.” He intoned it so formally, like I would recognize him by the moniker alone. Was it like Madonna or Cher? If so, ‘fraid it was lost on me. “I’m here to see you to safety.”

“Define safety,” I challenged. “And why I should believe you just because of your name, which for the record, doesn’t mean anything to me.”

Surprise crystalized in his expression edged by real frustration.

“Woman, I don’t care if you believe me. I’ll carry you out of here kicking and screaming. I can knock you out if I have to.” He dragged my arm out and slammed one of the shackles on. It burned as it snapped around my wrist. “I’m rescuing you whether you want to go or not.”

Why the fuck would I not want to go?

I just wanted to know whether I was going somewhere better or not.

He wrestled me into the second shackle, and I let out a frustrated scream as it closed on my free wrist. They were spelled. The magic in them burned where they rested against my flesh. Dick face— Maddox— stared down as my skin began to blister and smoke.

“That should not be happening.”

I was killing him first.

Shackled wrists and all, I clenched my fists together and struck both at his bloody nose.

If I didn’t break it the first time, I was damn well going to break it now. Unfortunately, he caught the slender chain locking my wrists together and hauled my arms up to slam them against the wall before he boxed me against it again.

“Stop fighting me,” he ordered. “The shackles have a spell.”

“The spell is to help us get you out.”

Gritting my teeth against the blistering sensation crawling over my skin and scalding it, I asked, “Who’s us?”

A flash of teeth. “You’ll find out. When you come with me.”

I hated this man.

Alarms began to sound and doors above opened with a clang. His expression turned furious. When he turned that glare on me, I gave him a little shrug. Or at least, as much as I could manage pinned to the wall in his murder bracelets.

Things obviously weren’t going as planned and between her bleeding wrists and no answers, Fiona’s temper was rising.

Maddox wasn’t the most diplomatic and with some help from Fin they calm her. It isn’t until the next night that they actually get her away with Rogue’s help. Well Rogue takes off with her so that counts, right?

I love this book, these guys don’t have a clue other than knowing they have to help her transition properly. Fiona has to accept both sides of her nature to survive. It’s the forth in this group, Alfred, who is the turning point in more ways than one.

Plenty of twist and turns, ups and downs, some giggles and plenty of Kindle Melting Sizzle, as we meet and get to know these guys who believe Fiona is theirs.

I really can’t wait for the next book! 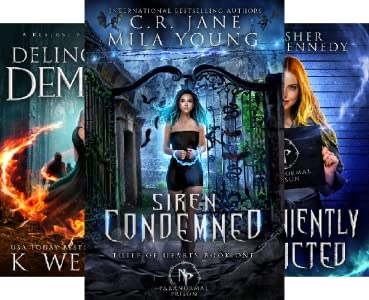