Military duty called them away to war zones, but after tours overseas, the group of friends found their way back home as men, seeking the peaceful little seaside town. Now, the band of brothers, together once more, work to provide a place for less fortunate veterans to call home.

Scott Redding served his time in the Army and paid the price. Coming back to the Eastern Shore, he was determined to live his life and not be defined as an amputee. Meeting Beau Weston was supposed to be about helping the older man settle his affairs…not change his life.

Lizzie Weston raised goats and alpacas, rising early and going to bed late, determined to not let her grandfather’s farm be sold. Accepting help from Scott was not what she wanted. The handsome accountant had impressed her grandfather, but she was sure he lived a life of ease and would not understand the demands of farming.

As Scott and Lizzie worked to save Weston farm, animosity grew into understanding…and then to love. But someone is out to force Lizzie to sell and it is up to Scott to save the farm…and her.

NOTE:
Scenes and language similar to what you would find in an R-rated movie. 18+ readers only.

After Scott Redding finished his Master’s Degree he returned to Baytown and began working for Lia at the Accounting Firm that had once been his grandfather’s. Lia has since offered him a partnership which he took without hesitation. A new to him client visits about taxes and plans for the farm. Beau Weston is all about making sure his granddaughter can make all the changes she needs to keep the place running and profitable.

Scott was still looking for the perfect house, he was renting but hadn’t found a house that said ‘home’ to him. On a detour he sees the sign for Weston Farms and Beau working the fence line.

The hot sun was beaming down, causing heat waves to rise from the asphalt road as Scott drove home from work. He had moved from the rental condo in The Dunes into a small rental house north of town. He had finally told his real estate agent that he was going to rent until he could find the perfect house. His rental house was much better than the condo but still did not feel like home.

As he came to an intersection, his way was blocked as the electric company was cutting overhanging limbs from a tree. Tossing a wave toward the workers, he turned down another lane to travel a different way home. With the air conditioner blasting, keeping the interior of his SUV cool, he felt sorry for the men and women who were working outside. He had planned on taking an afternoon run but decided he could wait until tomorrow morning.

Turning a corner, he saw a wooden sign proclaiming Weston Farms. He and Beau had stayed in contact as he found numerous tax benefits that would help the overall financial status of the farm. Beau did not make each monthly meeting of the American Legion, but Scott had seen him several times, the older man always greeting him warmly.

As he continued the drive, he saw Beau standing near the fence by the edge of the road. He pulled to the gravel shoulder, waving as Beau squinted in the sunlight to see who had arrived. Recognizing him, Beau waved as well, pulling off his hat to wipe his brow with a handkerchief.

Climbing from the driver’s seat, Scott walked over to the edge of the fence, shaking Beau’s hand, observing him sweating profusely. “Beau, I know you’re used to working outside, but it’s ungodly hot right now. Are you sure you’re okay?”

“You sound like my Lizzie,” Beau chuckled. He took a big breath and said, “You’re right, though. It’s mighty hot for this time of year. I surely can’t work the way I did when I was a younger man.”

His gaze drifted behind Beau to where a large animal was ambling toward them. Eyes wide, he asked, “Is that a llama?”

“Alpaca,” Beau answered. “We’ve got three of them now.”

Uncertain what to say, he was also uncertain how Beau felt about the odd-looking animal. The alpaca wandered over and nudged Beau’s hat off his head. Beau huffed, re-settled his hat, and said, “Stop that, Caesar!”

Blinking, Scott was unable to hold back his laughter. “Caesar? His name is Caesar?”

Shaking his head, Beau chuckled as well. “This here is Caesar.” Pointing toward the distance where two other alpacas were standing under the shade of a tree, he added, “The one on the right is Cleopatra, and the other one is Mark Antony.” He lost the battle of holding in his own laughter, and said, “My Lizzie… she’s got an imagination.”

Looking to the left, Scott saw a separate grazing area where goats roamed freely, younger goats frolicking around the pasture. Off to the right, nestled in between several large trees, sat a white, two-story farmhouse, complete with a wide front porch and two brick chimneys on either side. Several trimmed box hedges were in front of the porch, flowers blooming between each one. The house gave off a vibe of comfort and days gone by. His breath caught in his throat as he stared at the simple structure, resplendent in its simplicity.

“Would you like to come in for some lemonade?” Beau asked. “Lizzie has gone into town to the grocery, but I’m sure she’s got either lemonade or sweet tea in the refrigerator.”

It was on the tip of his tongue to take Beau up on his offer but realized that by doing so he would pull Beau away from the work on the fence that he had been involved in before Scott drove along. To a farmer, time was money, and he certainly did not want to interfere with Beau’s business.

“That’s a nice offer, Beau, but I really need to get home. I’ll let you finish your work.”

Shaking his hand goodbye, Beau added, “I wanted to thank you for all your help with our taxes this past year. With the changes coming along that Lizzie and I would like to make, we’re still solvent, and I can keep from having to sell Luca more of my land.”

“Don’t mention it. I’ll see you soon.” Observing Beau wiping the sweat from his red face again, he added, “Don’t work too hard and take care of yourself.” With a wave goodbye and a final longing look at the farm, Scott climbed back into his car, blasted the air conditioner once more, and drove home. Pulling into the gravel drive of his small rental, he thought back to the Weston farmhouse, wondering if his real estate agent could find a house like that for him.
Maryann Jordan. Count On Me – ARC Copy: Baytown Boys (Kindle Locations 221-256).

Scott becomes acquainted with Beau’s granddaughter, Lizzy, after he dies. It was Beau’s wish that Scott help Lizzy accomplish her dreams for the farm, not only through the tax help, but also with a business plan.

Lizzy isn’t all that enthused about accepting his help, but their story is one of developing trust, friendship and a simmer to sizzle love. With unexpected twists, and plenty of interaction with the original Baytown Boys, the veterans that have made Baytown their home, and the strong successful women who love them. 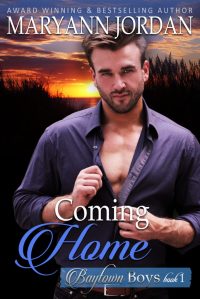 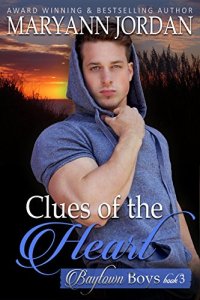 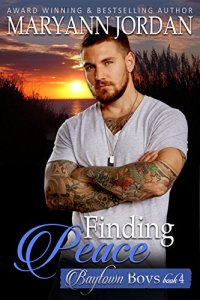 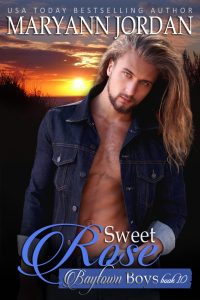 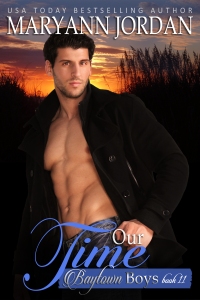