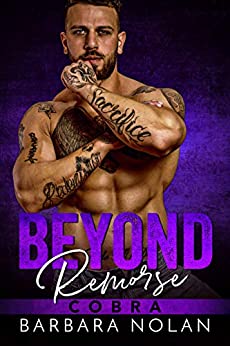 What happens in Vegas stays in Vegas unless you are two lost souls headed for disaster in a world Beyond Remorse.

Cobra, the president of the Las Vegas Serpents MC, doesn’t have time for distractions as he struggles to look after his handicapped brother, Danny, while keeping him far away from the MC world. An old agreement with a greedy mob boss, helped pay for Danny’s care, but dealing with the devil could put Cobra and The Serpents in jeopardy.

Sheena, the savvy, card hustler, is determined to go straight. Not so easy when the rent is due and your dinner is a bowl of cereal. Or when the same mobster holds secrets over your head, and refuses to set you free.

A biker wedding of mutual friends throws these two rebels together. Cobra knows peeling back Sheena’s layers could be his biggest remorse, and Sheena knows the bad-boy biker with the crystal blue eyes could easily unravel her world, but a bottle of tequila later, he takes a very drunk Sheena home and tucks her into bed—Alone?

Fate thrusts them together, once again, when a heist goes wrong at an underground poker game Sheena is dealing. After an out-of-control night, of dodging bullets and eluding the cops, Cobra and Sheena fall into each other’s arms neither caring about the consequences. Great if you believe in storybook endings, not so much if you’re a realist who knows vicious fuckers never give up.

When the mob boss threatens Cobra’s brother, and lures Sheena into his web, Cobra must take a stand. Fight for his club and protect his brother, or save Sheena from the lethal mob boss.

This book opens with Sheena’s best friend Daisy getting married. Her new husband Joker, isn’t part of the Serpents but he will help them out if needed. Cobra, the president of the Serpents MC is drawn to Sheena, he knows she doesn’t know about or want to be part of the MC world. Yet somehow he can’t stay away.

Sheena and Cobra both have secrets that no one knows. For Sheena her past needs to remain hidden and when she met Seth and Daisy she didn’t share anything about that with them even as they created and executed the scams.

Cobra’s secret is his brother, he needs to keep the MC world away from Danny. However the guilt he feels is present in everything he does.

Oh the tangled web of lies and deceit as Sheena finds herself in such a mess that the only one who can help is Cobra. On the other hand, nasty business partners are the reason Cobra ends up with Sheena’s mess as well.

Lots of action, suspense, laughter, tears and sizzling heat in the page-turning read.

Of course this is book two so I have to go back and read the first book. I am guessing it’s Daisy and Joker’s story. 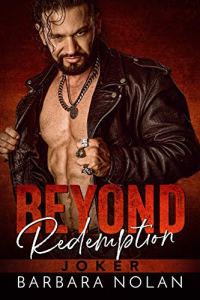 Barbara Nolan enjoyed writing most of her life and recently acquired her Certificate in Creative Writing from NYU. She also benefited from the help and influence of many talented professors and editors along the way. She is a member of RWA and the New Jersey chapter of Romance Writers. Her passion for reading and words make this a journey of love.

She writes gritty, realistic stories filled with strong men and the women who tame them.

She considers reading a luxury and writing a necessity.