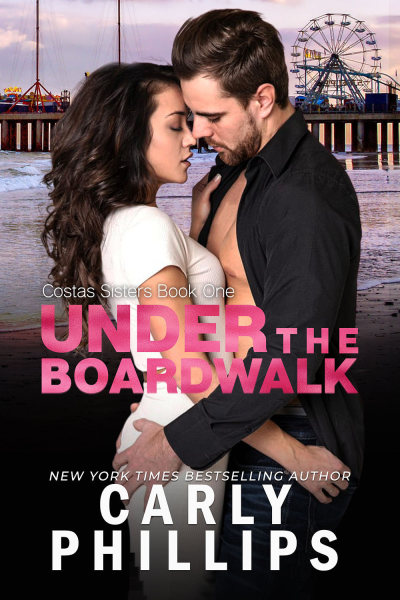 Ariana Costas may be a college professor in Vermont, but she’s still a Jersey girl at heart-at least according to her lovable, eccentric Greek family. Then her twin sister, Zoe disappears an dher Jersey roots tug hard. Soon Ari is back home, ducking bullets and, to her chagrin, getting rescued by a hunk in a black leather jacket.

Detective Quinn Donovan takes one look at the windblown beauty-and then looks again. If this lady isn’t Zoe Costas, it’s someone who looks exactly like her. Suddenly, Ari’s in trouble deeper than the Atlantic at high tide, and Quinn is trying to protect her without spilling his well-guarded secrets … as déja vu just might become the love affair of a lifetime.

When Ariana finds out her twin sister is missing she takes a leave of absence from her Professorship in Vermont to return to Hope City. Her family is a bit wacky and part of that is normal for them the rest was to keep from breaking down over their missing daughter and niece Zoe.

Needing a break Ari takes a walk to the beach with memories flooding her as she stops under the islet pier. Someone calls out Zoe’s name and instinctively she raises her head to look for her sister.

Quinn who is working undercover at the casino where Zoe was last seen is on the pier above her when a shot rings out. He immediately jumps to the sand below and covers her. When he rolls away Ari runs and he follows, what occurs is a very interesting conversation in which he reveals Zoe is alive but can’t tell her anything else. He also extracts a promise from her that she would return home to Vermont.

Of course Ari isn’t going to listen and the next time he sees her he definitely isn’t pleased.

She’d promised to get her ass on a plane. She hadn’t. By walking in here, she’d shown she wasn’t scared of the repercussions. She should be, Quinn thought as he rose from his seat.

But before he could intercept Ari and prevent Damon from seeing Zoe’s twin, Damon put a hand on Quinn’s shoulder. “Is that the woman you were talking about?” Damon nodded toward Ari.

As if Damon’s date sensed competition, she hung on more tightly to his arm.

The fact comforted Quinn, while he tried to figure out what to do about this newest complication. “I thought she was leaving, but don’t worry. I’ll get rid of her.”

Quinn watched through gritted teeth as Ari strode up the three steps to the bar and greeted them with a wide smile. Thank God Damon preferred blondes, Quinn thought.

“Hi.” Her gaze encompassed both men and Damon’s date.

“What are you doing here?” Quinn asked, to hell with preliminary niceties.

She shrugged but didn’t flinch at his angry tone. “I thought I’d check out where my sister works.” She motioned around the room with one elegant sweep.

“Worked,” Quinn reminded her. “You wanted to see where your sister worked.”

She lowered her gaze, the confidence in her demeanor not as strong now. “I’m just not used to thinking of Zoe in the past tense.” She drew a deep breath. “But you’re right. I wanted to see where my sister worked.” When she looked up, her grin was nowhere to be found.

A punch in the gut would have been a gentler way of hurting her, Quinn thought. But if she trusted him at all, which she had no reason to do, she’d play this game through. In the end, she would see her sister again.

“So now you’ve seen. Don’t you have a plane to catch?”

Damon’s arm candy started to whine, but Damon cut her off by pulling cash out of his pocket. “Go play,” he ordered his companion.

The blonde whose name Quinn hadn’t bothered to learn treated Damon to a kiss on the cheek and sashayed off.

Ari raised an eyebrow Quinn’s way. “I’d appreciate an introduction to your friend.” Her sultry gaze settled on Damon.

She was scared. Of Damon, he hoped, because that would mean the professor did indeed have the brain Zoe credited her with. And then Quinn could count on her to behave, at least while she was in the casino.

“Yes,” Damon said from beside him. “I believe introductions are in order.” He oozed charm. Slimy, not-to-be-trusted charm.

“Ariana Costas, I’d like you to meet Alec Damon. Mr. Damon owns this casino, in case you’ve been living under a rock for the last two years.” Or in Vermont. “Damon, this is Zoe Costas’s twin,” Quinn said pointedly.

Damon smiled. “I thought I noticed the resemblance. Nice to meet you, Ariana.”

“Same here.” She swallowed hard. “I’ve heard so much about you, Mr. Damon. Not from my sister, since we . . . we hadn’t been in touch in a while, but my mother talks about you often.”

“Only good things, I hope?” She nodded. “That’s another reason I came by. I wanted to meet you. To thank you in person for lending my mother money when she was in need.” Ari held out her hand and Damon took it.

“My pleasure.” He released his grasp, his astute gaze raking over Ariana’s body. “Your mother was a hard worker and a very talented dancer.” He inclined his head. “Do you share her ability?”

“Somehow I doubt that.” His gaze traveled the length of her body, beginning with her long legs and remaining on her cleavage before finally landing on her face.

She did her best not to squirm, but failed. Still she faced Damon head on. “Thank you again for helping my family. And it was nice meeting you,” Ari said, all but ignoring Quinn.

“The feeling’s mutual. And . . .” Damon paused. “I’m sorry about your sister. Zoe was beautiful inside and out. She worked hard and we at Damon’s valued her.”

Ari tipped her head. “That means so much.”

“Quinn, why don’t you show Ms. Costas around the casino.” The suggestion was nothing short of an order.

Despite Damon’s civil veneer, Quinn didn’t want her staying around unchaperoned. Quinn would follow his order with pleasure. Not just to find out what the hell was behind Ari’s agenda, but to get closer to the sultry beauty for reasons he didn’t want to name.

Putting his arm around her waist, he led her down the stairs and away from Damon. She was smaller than she looked, and her waist fit snugly against his body, feeling too good considering he wanted to throttle her.

He left the casino behind, entered the hotel lobby, and steered her directly to the office area and a vacant hallway. He paused only long enough to unlock the door and nudge her in. Entering his private domain, he slammed the door shut behind him and locked them inside.

He turned on the light before folding his arms across his chest and facing Ariana. “Well?”

“Well what?” She batted her eyes and forced the most innocent look she could manage.

It had to be forced considering she must be quaking in her stiletto pumps. “Does this look like Vermont to you?” He gestured around the state-of-the-art office, with its new computer, expensive desk, sophisticated phone system, and both audio and video bugs recording everything that was said.

She shrugged, taking in the sterile environment where he spent many of his days. “Not particularly. My office is a lot more musty and not as bright.”

He closed his eyes and counted to ten. She was baiting him on purpose, and she was more like Zoe than he’d given her credit for. He wouldn’t make the same mistake twice.
Carly Phillips. Under the Boardwalk (Kindle Locations 477-528). CP Publishing.

In spite of her not listening or maybe because of it, Quinn finds himself falling hard and fast for Ari.

Then there’s Sam, a teenage foster child he helped get placed in a good home. She keeps testing everyone’s patience by running off.

She takes to Ari and the craziness of the Costa’s family. Which just happens to now include a monkey named Spanks.

This is a convoluted tale, with tears, suspense, action, surprises and some sizzle as well. 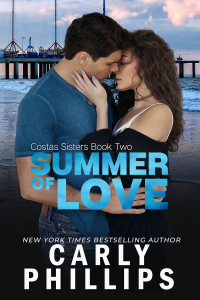