He was the second date that should have lasted a lifetime.

Flynn Wagner didn’t have time for relationships. Her career as a headhunter in New York City was the only thing she truly cared about, outside of her parents. When her dying mother asks her to go on their much-anticipated trip to Alaska without her, Flynn can’t deny her mother’s request. Shortly after her mother’s passing, Flynn sets off to the frozen tundra and the Mistletoe Lodge. She’s prepared to hear endless stories about her mother. However, nothing can prepare her for coming face to face with the one man she couldn’t get out from under her skin.

Colton Granger left Alaska and joined the Army when he’d been eighteen years old. He swore he’d never return to his hometown. But when his father has a heart attack, Colton decides it’s time to return to the Mistletoe Lodge and help his mother keep the business running during the winter months while his father recovers. He never expected to open the doors to the lodge and find the woman who had changed his life forever standing there in high-heeled boots, a winter coat that didn’t keep a person warm, and a killer smile that would soon melt his heart.

I can see how hard it would be for Flynn to take this trip to Alaska without her mother. It was something they were going to do together. The Mistletoe Lodge is run by Flynn’s mother’s best-friend Renee and her husband, it’s also where her parents spent their honeymoon. The one thing she was grateful for was that their son Colton wouldn’t be there.

Colton was Delta Force and after his last tour his father had a heart attack. He’s left active service, returning home to run Mistletoe Lodge while he tries to convince his parent to move south. He knows there’s a VIP guest coming, his parents have conveniently not said who it is.

Since Colton and Flynn were kids their parents seem to thing they’d make a great couple. What they don’t know is Colton and Flynn had a week long fling in NY. The parted ways, her for her career, him for a tour overseas.

While I got a kick out of their first meeting at the hotel, the scene in the lodge after dinner is one of my favorites.

“Even if this goes through, I’ve got more deadlines I’ve got to meet. Is there something else we can do to boost your internet?”

“That’s about as good as it’s going to get.” Colton stood in front of the bar and poured himself another glass of wine. Nothing beat a full-bodied cab on a cold Alaskan night.

Except maybe a hot brunette with her long legs wrapped around his waist in his bed.

No. Fuck. Having her this close was going to drive him crazy.

Trying to make himself comfortable in the recliner, he snagged his tablet and brought up the local newspaper, skimming the headlines, determined to go through his evening routine as if the scent of lavender shampoo wasn’t filling the air in his cabin.

Hannah groaned and rolled to her side. At least he got to keep his dog nearby.

“I need this to go through tonight.” Setting the computer to the side, she stood and stretched. Her shirt tugged from her pants and showed off her milky skin. “It says it’s got fifteen percent left, so hopefully it goes through.”

“Why can’t you just email it as an attachment?” Acting as if he didn’t care, he scrolled to the next article. Not that he knew what the first one had been about. “Or we have a fax machine in the office at the hotel that works fine.”

“It has to be through the portal so my client can access the information and résumés.” She breezed past him and filled her glass, finishing off the bottle.

“That’s your third one.”

“What are you, the wine police?” she asked with a fair amount of snark.

He chuckled. “Just wouldn’t want you to be hungover tomorrow.”

He had a point, so she’d make sure to sip and drink lots of water. Her computer dinged.

“I take it your files didn’t upload.”

“Nope. And that means I have to refill out all the parameters, and that’s going to take me a half hour. I’ve told my boss a hundred times he needs to fix the site when this crap happens, but nooooo, does he listen to me? Of course not. He thinks that anyone who has a problem with the portal outside of the office is on them, and to quote him, they need to suck it up and deal.”

“Your boss sounds like my first staff sergeant. He expected us to take full responsibility for him and his mistakes. He actually said that was our duty. We decided it was our honor to make sure he got nailed for his incompetence.”

“I should have gotten these résumés and portfolio profiles loaded yesterday, and I didn’t.” Flynn leaned against the back of the sofa and folded her free arm across her middle. She stared out the window. The moonlight caught her dark hair, making it shimmer in its soft glow. “If I had followed proper protocol and completed this in the office, I wouldn’t have to do it remotely, and I wouldn’t be in this situation. So, the only incompetent staff sergeant here is me.”

Why did she have to make it impossible for him to dislike her? “Grab your computer and come on.”

“Where are we going?”

She coughed, nearly spitting out her wine. “Like hell.”

“Relax. I have the internet hardwire coming in through there. It might work over the Wi-Fi connection.” He snagged her computer and headed up the stairs, trying to remember the last time he’d had a woman over.

Last October. Halloween to be exact. A short-lived affair with a woman who worked at one of the booking huts up the road. It had been perfect because she wouldn’t be returning. A nice clean break and until this moment, he hadn’t given her a second thought.

Yet Flynn had consumed his mind for years.

“I hope this works,” Flynn said.

“It should. The connection is always more powerful since it’s direct.”

“Shit,” she said under her breath. “My laptop doesn’t have an input for a hardwire.”

“Ah, she forgets what I did for a living.”

“I didn’t forget; I never really knew,” Flynn said. “Other than you worked in Intelligence for Delta Force.”

“Specifically, IT and communications.” He pushed open the master bedroom door. Hannah raced through the threshold and leapt onto the king-size bed, circling three times before she made herself comfortable on one of the pillows.

“Oh, my God.” Flynn set her wine glass on his mahogany chest and ran her fingertips across the wood. “This is amazing. Does it take up the entire top floor?”

He nodded. “My folks let me remodel when I moved back home. The plan is to do the downstairs and make this place the honeymoon suite.”

“Where would you live?”

“I’m hoping at the end of this summer season, they move to California, and I’ll move into the main house.” He led the way into his office, setting her computer on his desk and hooking it up to the internet wire and his big monitor. “Otherwise, I’m moving into a room at the hotel.” His mother would prefer him to live in the house with them, but she had a tendency to mother the hell out of him.

And he didn’t dare bring a woman home for a one-night stand under those conditions. Not that he did that often, but still, he liked to keep his options open.

“You’re going to run this place? Permanently?” Flynn stared at him with unblinking eyes. “You left Delta Force, a career you said you loved, to return to a place you said you’d never live again, because of your father’s heart attack? That’s noble but shocking that you’d do it long term.”

She reached out and palmed his cheek. “I can see you taking an extended leave of absence to help nurse your father back to health and to maybe talk them into selling this place. But running it? You told me that while you loved growing up here, you didn’t ever want to live here again.”

“Nearly dying at the hands of the enemy in a hostile territory tends to change a man’s perspective.” Curling his fingers around her dainty wrist, he searched her eyes for anything that told him a kiss would not be welcome. He licked his lips in anticipation of tasting her sweet strawberry flavor. Everything about her sent his senses into overdrive. Three years ago, he found it nearly impossible to keep his hands to himself.

Tonight would no different. Only this time, he would show some self-restraint, self-restraint, starting right now. He pressed his lips against the palm of her hand. “Why don’t you sit down and get your work done. I’m going to go take a shower.” He snagged his glass of wine and turned on his heels. He would not make the first move. Hell, if she made a move, he’d protest. He might not fend off her advances for very long, but he’d at least make it a legit attempt.
Jen Talty. Alaskan Christmas: A Mistletoe Lodge Novella (Kindle Locations 453-508).

It was lots of fun watching Flynn battle with her emotions where it comes to Colton. From hot to cold to jealously and back again on the excursion with the sled dogs.

Of course her job gets in the way, and this time there doesn’t seem to be a way out for her. Plenty of ups and downs, some twists and turns, some sizzle and lots of romance as these to figure out what they really want. 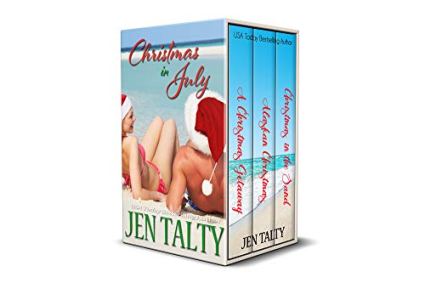