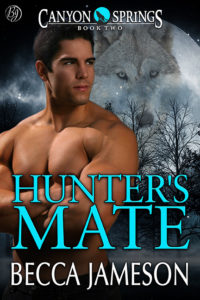 The small town of Canyon Springs, Colorado, is filled with warm, welcoming people and breathtaking views. Is that why visitors often decide to stay for the rest of their lives? Or is it something else?

Layla doesn’t believe any of the nonsense her grandmother filled her head with growing up. There’s no way that shifters have the ability to entice humans into their world through some sort of coercion. The woman was simply prejudice. The concept is nonsense.

So, Layla isn’t concerned about making the trip to Canyon Springs to settle her estranged aunt’s estate. In fact, she’s hoping to meet her first shifter and find out if they really are larger, sexier, and more tempting. The truth is that Layla is a starving actress, and she needs a change.

She’s not, however, prepared to meet Hunter and put all her beliefs to the test. He’s everything she hoped for and then some. It would seem he’s also doing exactly what her grandmother warned her about—luring her into his lair. Her libido is on overdrive. Her heart is in danger too.

This is Layla and Hunter’s story, it intertwines with the story told in ‘Caleb’ but adding more details and a different point of view. From the initial meeting in the only bar in town, to the meeting in the lawyer’s office, the one that Caleb and Hunter share the reaction is basically the same. Shock and anger from Layla and Elena and devastation from Caleb and Hunter.

Hunter drew in a long deep breath as he stepped around the side of Marge’s house, looking for Layla. Not only was she exactly where he’d expected, but she was bent over at the waist, pulling weeds from Marge’s flowerbed, her fucking hot ass in the air.

She had changed from earlier. When she’d entered the law office, she’d been wearing a fantastic black dress that hugged all her curves and black pumps. Professional but sexy. He was beginning to think she owned a dozen such black dresses, and he was fine with that.

He’d wanted to grab her by the waist, pull her against his chest, and kiss her right then and there.

That wasn’t what happened, however. The meeting he’d expected to last a few hours, going over Marge’s will and her wishes, had never gotten started.

It turned out Layla and Elena were not impressed to find out neither Hunter nor Caleb had mentioned a word last night about being Marge’s attorneys. Of course, Hunter should have known it wouldn’t go over well. Obviously when Layla had explained to him why she was in town, he’d known immediately that these two women were the ones his new office manager had sent the certified letters to.

Prior to that, it hadn’t occurred to Hunter for one second that the woman he’d seen out jogging might be one of Marge’s nieces. He had not known specifically when they would be arriving.

Rayanne, their office manager, had only been with them two weeks. Their previous office manager had left them when she got pregnant with her third child. Rayanne had entered the meeting for Saturday morning into the calendar as “new clients.” Thus the comedy of errors that led to Hunter’s shock when he realized who Layla was.

The fact that he hadn’t set her straight last night? Well, he would have to chalk that up to poor judgement. Or not. That all depended on how long it took him to grovel.

Hunter was still trying to figure out what to say when Layla suddenly shot to standing and spun around. He was a little surprised she’d sensed him, though he shouldn’t have been.

Layla threw a hand over her chest. “Jesus. You scared me.”

“Sorry.” He inched closer. Damn, she was cute. The black dress had been traded for khaki shorts and a yellow tank top. She had on flipflops too. Her light blond hair was piled on top of her head in a haphazard bun.

She made his heart stop.

For a moment, she stared at him, her gaze roaming up and down his body. He’d changed too. Jeans, white T-shirt, tennis shoes. He wished he could climb into her brain and read her thoughts.

He smiled. “Yes. When it matters.”

She rolled her eyes. “Please don’t start spouting some shit about you and I belonging together or something. I can’t take it.”

“Okay.” He could do that. He would do whatever it took to get her to let him in. Let him spend time with her. That’s all he needed. Time. She would see. She had to. There were no other options.

Already it would be horrifying if she denied him and left town. He thought of Anders Johansen and all the years that man had spent pining… He shook that thought from his head. It hit too close to home.

“That’s it? Okay? You failed to tell me you were not just a lawyer, but the one handling my aunt’s estate. What did you think would happen when we showed up this morning?”

He drew in a breath. “I didn’t think it through well. I’m sorry. Please just… let me help.”

“Help? With what?” “The house. The will. Whatever you need.” He glanced at the flowers. “I can pull weeds.” He didn’t think he’d ever pulled a weed in his life, but he assumed that was what she was doing.

She closed her eyes and tipped her head back, groaning toward the sky.

He stepped closer. “Why, exactly, did you decide to start with the flowerbeds?”

She startled when she lowered her gaze and found him in her space. She drew in a breath and flinched. A part of her knew. Knew what the two of them were to each other. She could argue and deny it, but he had to assume eventually she would cave. “The inside of the house felt overwhelming. Marge was a packrat. I needed some air. So, I came out here. The flowers called to me I guess.”

He lifted a hand and stroked her cheek where a smudge of dirt had settled. “You jog. You pull weeds. I’m going to assume you prefer the outdoors.”

“Always.” She tipped her face into his palm, though he wasn’t sure she realized it. “I breathe better when I’m outside.”

“See, this is why I like to shift and go for a long run in the mountains. I can breathe better.”

“That must be amazing. I’m jealous actually. Why bother to run in human form?”

“Because I have to keep up my human body too. It’s like I’m two different beings. My wolf is strong, but the two of us need balance.”

“It’s a lot to take in. I mean I knew shifters existed, but never having met one, I didn’t think much about it. Are there like rules or something? Can I see you in your wolf form?”

“Of course. Any time. No rules. We simply try to lie low and not scare the hell out of people. We don’t shift and wander around town. We don’t shift in front of strangers. We’re careful. But you can watch. I’d love that.”

She nodded slowly. He could see her uncertainty, and he couldn’t blame her. It was natural. Seeing a man shift into a full-grown wolf was shocking at first. He certainly didn’t want to freak her out. “I promise we are mostly regular people. I’m certain you have actually met shifters before. You just didn’t realize it. We’re all over the place. Even in Los Angeles.”

Layla swallowed and glanced at the house. “Did Caleb come with you?”

“Yes. He’s inside with Elena, assuming she didn’t shut the door in his face.” Hunter winced.

“Can’t speak for her. She might have. She has a soft heart, but she doesn’t let herself get run over.”

Hunter stepped closer. Inches separated their bodies. He slid his hand around to her neck. “What about you? Do you have a soft heart too?”

She shook her head and tipped her face back. “Not like her. I try to harden myself against disappointment so that when it comes, I can brush it off.”

“I’ll try not to disappoint you,” he murmured.

I really love the groveling Hunter does and the not quite meeting up with Caleb and Elena. There is much for Hunter to tell Layla but he’d rather do it on his home turf. Including doing the shift she wants to see.

Fun and romantic with lots of twists and turns, secrets revealed, sizzling heat and so much more! I can’t wait to see what Becca has in store for us in this series.