You know, I never imagined having one boyfriend much less four. Jake, Archie, Coop, and Ian are still my best friends. They’re also even more entrenched in my life than I ever imagined. They’ve been my rocks, but I’m not the only one with issues.

We’re fighting our way to a new normal. I’m in therapy. Ian and I are dating. Archie introduced me to his grandfather. Both Coop and Jake’s moms refer to me as their son’s girlfriend. I don’t know how much our parents know about our relationship, but I also don’t care.

That starts with us.

PLEASE NOTE:
This is a reverse harem and the author suggests you always read the forward in her books. Contains some bullying elements, mature situations, and is recommended for 17+. This is the fifth in a series and the story will continue through future books.

If you haven’t read the other books in this series STOP now and go read them. This book starts off where ‘Whispers and Wishes’ leaves off.

Ian and Frankie had gone outside to talk while the other guys get in line to get water. Who has a cash bar at a party? The amount of time that passes worries them and they head outside only to hear a scream. As you can imagine, the scene that unfolds is chaotic and the police get involved as well. Rachel is with Frankie as she answers questions from the detective.

“Ian and I were talking. We were minding our own business, when Mitch and the guys walked up on us. Mitch said he’d been looking for us, and Ian got in front of me. The next thing I know, there’s a bag over my head and someone is yanking me backwards over that railing.” My back still hurt from where I’d scraped over the wooden railing. “You know, before it got broken. Anyway, I was struggling against someone, and I could hear them hitting Ian. Then someone knocked the guy away from me, and I hit the ground pretty hard.”

Probably going to bruise from that impact, too. That just added a fresh log to the anger burning away in my gut.

“Um, I got the bag off my head, and there were fights everywhere— there were a lot of guys piling onto Ian. Coop and Jake were trying to help get them off. Then Sharon— she tried to hit me, ran at me from out of nowhere. I ended up hitting her with my cast, broke her nose.” I almost smirked, but I swallowed it back.

Yeah, I wasn’t sure that was the help I needed at the moment, but I spared her a faint smile, and she grinned.

Hell yes, she had. “Anyway… then Archie was there trying to pull me out of it, ‘cause another guy was running at me.”

“Jimmy Trainer,” Rachel supplied. “He didn’t make it ‘cause I pepper sprayed his happy ass and put him down. The last thing she needs is to get hit again.” Pride resonated in her voice.

“Yeah you did.” We shared another grin, then looked at Talbot who, while not smiling, did manage to look a bit amused. “Then the cops showed up and started arresting everyone, including Ian and Jake. They were the ones being assaulted and shouldn’t have been arrested.”

Raising his hands, Talbot said, “I understand that, but there was a lot of property damage and injuries. We’re going to sort this all out. Is there anything else I need to know?”

“You mean like the fact that Mitch already assaulted her once, and you assholes haven’t actually charged him with anything?” Rachel demanded. “He drugged her, broke her wrist, tried to rape her…”

“Rachel,” I said, and she frowned, fiercely, but went quiet.

“That’s an ongoing investigation, Ms. Manning,” Talbot told her, but he gave me an apologetic look. “Did you feel threatened tonight?”

“Did he touch you in any way?”

“Tonight?” I shook my head. “Ian didn’t let him get anywhere near me.” I actually had no idea who dragged me off the porch. I was pretty sure he was one of the unconscious guys they’d loaded onto stretchers. No regrets there. I hope he hurt a lot when he woke up.

“Okay, but did you feel threatened by him?”

“He showed up and said he’d been looking for me and Ian specifically, and he was pissed. So yeah, I felt threatened.” What a stupid question.

Talbot didn’t comment on my sarcasm, he just made a few more notes, then said, “Do you feel you may have antagonized him in any way?”

Was he serious right now? “I haven’t seen him since Homecoming.” My gut churned. “But then again, I didn’t antagonize him that night either.”

He gave me a small smile. “I have to ask these questions, Ms. Curtis. I understand they’re uncomfortable.”

“Do you?” Rachel demanded, and I nudged her lightly with my elbow. I appreciated her defense, but I really didn’t want this to take any longer than it already had.

“Actually, I do. Now it’s my understanding you have a restraining order in place for Mr. Hooper.” Hooper? Was that Mitch’s last name? A part of me felt like I should know that, but I honestly didn’t know him beyond the fact that he was on the football team with Ian and Jake.

“Um… probably? Mr. Wittaker was taking care of a lot of things for me.” It sounded like something he would do.

“Can you give me his information?” Talbot’s tone had changed to something far more solicitous. “If the restraining order is in place, then Mr. Hooper violated it tonight.”

Well, whoop-de-doo. “Does that mean you’ll do something about him?”

He sighed. “Ms. Curtis— can I call you Frankie?”

“Thank you, I’m Rick.” He waited a beat, so I nodded to acknowledge what he’d said, and he continued, “I understand how difficult it is to think we’re sitting on our hands and not doing anything. I wish investigations in real life were as fast as they are on television, but there’s a process. We’re going through the process. You’ve done everything right. You made your statements. You released your medical findings. You told us you wanted to press charges. These are all important steps. I know it’s a lot to ask for your patience, but we do need it right now.”

“And if he shows up again?” Because he’d done it once. Twice if you counted Homecoming. At this point, I never wanted to go to a party again. So far, they’d all sucked.

“We’re going to work on that so he doesn’t.”

Movement beyond him had me shifting my weight. Archie was on his way straight toward me with Mr. Wittaker. Where was Coop?

“My lawyer is here.”

“He is?” Talbot turned as Archie and Mr. Wittaker got there. Mr. Wittaker didn’t waste any time introducing himself, shaking Talbot’s hand, and drawing him away from me and Rachel.

Rachel let me go when Archie wrapped his arms around me. “You okay, babe?”

He grinned a little. “That’s my girl. Hold onto that, ‘cause it’s going to be a long night.”

That was what I was afraid of. “Did Coop get arrested too?”

“Detained. They’re taking him to the precinct, too. There was blood on his clothes.”

Rachel snorted. “Of course there was blood on his clothes. Did they not see the carnage out here?” Thankfully, she didn’t shout the words, but Archie just shook his head.

“It’s procedure. They probably won’t be charged. All of it is self-defense. They’re also going to have to get Bubba looked at. He had a lot of guys whaling on him.”

My stomach bottomed out. Jake wasn’t eighteen. They were probably going to call his mom. He’d gotten hauled down to the precinct a month ago. “We need to go get them.”

“We’re going to,” Archie said. “I’ve got Jake’s keys, so we’re going to take his car. Mr. Wittaker is going to meet us there as soon as he takes care of the detective.”

“I’m going to go get Skylar and take her home,” Rachel said. “Then I’ll meet you guys at the police station.”

“I want to,” she told me. “Besides… you know the after party is always more fun than the party itself.”

I snorted, then pulled away from Archie to give Rachel a hug. “You’re a badass.”

“Yes, I am,” she agreed, squeezing me gently, but she didn’t miss my wince. “And you need to get looked at, too.”

Suddenly, Archie was in my space. “Did they hurt you?”

“Bruises.” But I didn’t really get to object as he hauled me toward the paramedics. I glared at Rachel, and she blew me a kiss.

Every once in a while, I remembered why we’d had a love-hate relationship for so long. I just stuck my tongue out at her before I flipped her off, and she finger-waved as she strolled back toward the house where Corey Kaplan was getting reamed out by his parents.

Yeah, this hadn’t been a good night for anyone.
Heather Long. Hangovers and Holidays: Untouchable Book Five (Kindle Locations 270-332).

Let me say it now, I love Rachel and even the guys are starting to like her.

My heart definitely belongs to Archie though, he just keeps doing the right things. This book takes us through Thanksgiving, OMG the food! Three dinners, Coop’s Mom, Jake’s Mom and Ian Parents all cook up feasts for the day that Frankie has to indulge in. By the time she’s finished at Ian’s she’s almost in a food coma and that leads to a perfect scene for those two.

It’s Archie who does the almost impossible and surprises Frankie with a trip. With Rachel’s help she even has the right clothing for it. Jeremy is taking care of her cats promising to spoil them and shipping the presents. Snow, Christmas Trees, Skiing, Snowball fights, Hot tubs and edibles, it doesn’t get better than this!

A wonderful, fun-filled, romantic, sensuous and all in all a spectacular vacation for Jake, Coop, Ian, Frankie and Archie. I loved every single page of this book as this relationship forms into what it will be.

I really can’t wait for the next book as they return home for the final months of school. 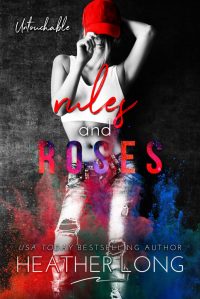 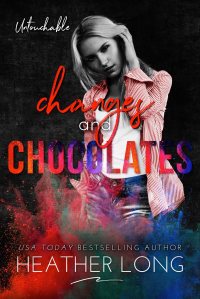 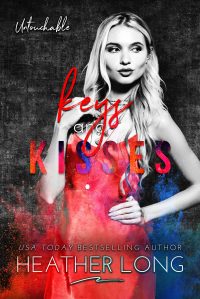