Fitzgerald Monroe had a two-track mind. Woman and Ice Hockey and not necessarily in that order.

After a little too much partying, Fitz finds himself having to serve his community by acting as the coach for a local travel team. The last thing Fitz wants to do is deal with a bunch of pre-pubescent youngsters with attitudes and their parents who all think they are going to the NHL.

Emery Anderson had been doing it alone her entire life and she wasn’t sure she could do it anymore. The bills were mounting, and she was at the breaking point with her son and his entitled behavior. However, when her ex-husband’s business is investigated for shady dealings, she and Maverick find themselves relying on a perfect stranger. And in more ways than one.

Will Fitz be like every other hockey playing idiot that walked in and out of her life, or will he be the won who scores where mama hides the cookies?

I have to laugh every time I read the names, all the Kennedy names linked with the last name of Monroe.

This book opens with Hockey Star Fitz Monroe in the hot seat. He never should have gone to his ex’s wedding, he was set up but good. Now the judge has to decide his fate, jail or fines and community service. The jury had found him guilty of aggravated assault a crime with a penalty of up to 5 years in prison. Thanks to a video not seen by the jury of the incident, the judge comes to the conclusion that bringing the case to trial was a personal vendetta and sentences Fitz to three years probation, a five-thousand-dollar fine, and three hundred hours community service which the judge himself would assign.

I love what the judge decides for community service. Apparently the judge’s grandson’s travel hockey team lost their coach and Fitz is his choice to fill that spot. Emery Anderson is the judge’s daughter, her son Maverick is a talented hockey player. She is also the team manager and also works at the rink. A possible problem would be her ex Kace. He’s Maverick’s father and there has always been friction between Kace and Fitz. Kace blames Fitz for his short-lived hockey career in the NHL.

Fitz’a first meeting with Emery amusing and filled with some interesting facts about their past. All that before practice, but it’s the events after that truly upped the bar. Once the parents had the packet Fitz had prepared in advance of the parent meeting, Kace shows up giving us a taste of things to come.

He quickly untied his skates, whipped the ice off them, and slipped on his sneakers.

Across the rink, the parents had gathered in the stands, huddled on the lower level, and a couple of them waved the packets in the air.

This was going to be amusing, to say the least.

Fitz was glad he wasn’t ever going to be a parent.

As he rounded the corner, he skidded to a stop before he ran right into Kace.

“What the hell do you think you’re doing?” Kace asked.

“Coaching a hockey team; what does it look like?” Fitz said. “And it’s good to see you again too.” He stretched out his hand and smiled.

“I’m lucky I was in the area when one of the parents called with this bullshit.” He waved the parent packet in his face. “And what is this crap about kicking me off the bench? You can’t do that.”

“Right. Like this is a full-time gig for you.”

“I have this time through August. That’s four months I will be dedicated to the boys on this team, and only this team.”

“The only reason you are here is because you can’t keep that temper of yours in check.” Kace inched closer. His eyes narrowed.

He was baiting Fitz and Fitz wasn’t going to be reeled in like an idiot fish on a hook.

“It doesn’t matter how I got here; I’m not leaving, and I’m going to ask you respectfully to follow my rules. They aren’t that much different than what our parents had to follow when we were kids.”

“These are bullshit and you know it. Besides, why the hell would you keep Steve on the bench and not me? He barely played juniors. I played pro for a couple of years. I know a hell of a lot more than he does.”

“Do you really want me to answer that question?”

“Because he shows up.” This was the last thing Fitz wanted to do, but he needed to put Kace in his place from the get-go. If he didn’t set the tone from the start, the other parents wouldn’t have any respect for him and that meant the parents wouldn’t do shit. “I looked at the regular season and how many practices you logged and games you showed up at and that isn’t what these kids need. They need consistency, especially at this—”

Kace poked Fitz in the chest. “Don’t you dare tell me what my son, or any of these young boys need. Do you have any kids?”

“I think it’s exactly the point. Now either put me on the bench, or I’ll take my son off this team.”

“You will do nothing of the sort,” Emery’s voice tickled Fitz’s ears. She stood next to him and planted her hands on her hips. “And I saw you assault Fitz.”

“Technically, you did.” Fitz shouldn’t be enjoying himself, but he was, just a little. “I hope you won’t remove your son. He’s a damn good player and a nice kid. Now, please join me for the team meeting.”

“This conversation isn’t over,” Kace said under his breath as he stomped off toward the bleachers.

“Sorry. I didn’t expect him to come back.” Emery tucked her long blond hair behind her ears. “He’s going to give you a lot of problems.”

“I can handle your ex-husband,” Fitz said. Though he wasn’t so sure he’d be able to deal all that well with her kid. He might be talented, but he had a chip on his shoulder the size of Texas and he wasn’t a team player and he sure as hell had a big fucking problem with Fitz. “I noticed the ice before my clinic tomorrow is free. I’d like to book it.”

“Sure, but for what, if you don’t mind me asking.”

“Not at all. I was hoping to have Maverick with a couple of the other boys for a private lesson. I’m actually planning on doing this at some point with all the kids.”

“I’m sorry, but I can’t afford any extra lessons or ice time.”

“Well, that’s the beauty of it. My lessons are free, and before you go jumping to conclusions, this isn’t part of my community service. Your father wouldn’t allow it.”

“Because I don’t do anything half-assed and I don’t like to lose. I plan on taking this team to the spring playoffs and being the last team standing.” That was a true statement.

“The ice is yours, as soon as you pay me for it, and I’ll have Maverick here. Who are the other boys that he’ll be working with?”

“Does it matter?” he asked with an arched brow.

“Well, Kace doesn’t have say in the matter, and I’d prefer it if neither of you sat in the stands and watched, but I can’t prevent you from doing so.”

“It’s Sunday, so Kace will be at his other son’s practice and then church, so he won’t be here, and I generally don’t watch practice, so no worries.”

Aside from being an opinionated arse regarding hockey, Kace is also behind on child support and other things he’s supposed to be paying for his son, all while driving a hundred thousand dollar car.

Fitz overhears some stuff and now he’s even more determined to help Emery and maybe break down the wall she has when it comes to dating hockey players.

Maverick in gets conflicted between what Fitz wants from him as his coach, and what his dad expects from him. I loved the scenes with the team both on and off the ice.

Fitz’s siblings show up in this one too, I do love seeing them. Bobby and Navy play an important role in this one. Now I really have to go read the first two books in this series.

I loved Fitz and Emery’s story, a simmer to sizzle relationship, with plenty of ups and downs caused by Kace. 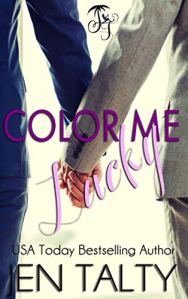