Army Counter Intelligence Agent, Ledger Bale traded in the adrenaline of deployments and special operations for a desk job so he could not only be closer to his family but so he could find a family and enjoy life’s finer points.

Only the objection of his affection wouldn’t give him the time of day.

The last thing Temperance Malone needs is another high strung, a thrill-seeking junkie for a boyfriend. But when she finds herself with a flat tire on the most important day of her life, she lets her super sexy neighbor give her hand, but no way in hell will she allow him to steal her heart.

An athletic director, a doctor, a construction worker, a CI Army agent, a rancher, an engineer, and a military pilot are all leading a somewhat normal life. So what do these seven men have in common? They are your average man going about their day until something out of the ordinary happens in front of them. To the victims, the strangers, and their loved ones, they went from an everyday man to an everyday hero!

Temperance Malone is recently divorced and has moved into a the same neighborhood as Ledger Bale and his sister Serenity. All efforts to get to know her have fallen through until she gets a flat tire on the way to her new job. That’s when she finds out her ex had canceled her road side service. It’s Ledger comes to her rescue as she is trying to get her ex to help.

“I couldn’t leave you stranded on the side of the road, now could I?” He pointed to the trunk. “Can you pop that so I can get at your spare?”

“Sure thing.” She dug into her purse and found her keys. If she’d learned anything in the last year it would be to never be in debt to anyone. That meant she’d have to repay Ledger and she’d have to do it quickly. They lived two doors down from one another and she couldn’t deal with him constantly coming around, so she’d have to come up with something good.

He was always smiling and waving and being overly nice as it was. Of course, everyone on the block was that way.

“My sister said you haven’t responded yet about her party. Will you be coming?” Ledger’s biceps flexed as he yanked the tire from the trunk. He pulled out all the tools that went with it and lit the flares, setting them on the pavement around the vehicle.

Shit. She’d forgotten all about the spring into summer party one of the other neighbors was throwing this weekend. “Sister? You and Serenity are related?” Temperance’s heartstrings tugged. All she’d ever wanted had been a family to call her own and Mathis had been her Prince Charming. They had the perfect plan and she thought they’d been happy.

Then he took a job in his hometown without even really discussing it with her, leaving her world turned upside down.

“Yup,” Ledger said with a grunt.

Temperance folded one arm across her middle and chewed on her thumbnail all while staring at one hell of a specimen for a man jacking up her convertible.

When she’d been fourteen, her father had died suddenly, and her mother had no life skills to take care of herself. Worse, she’d found out her father had another family. Wife. Kids. A second house. Even a fucking dog.

Six months later, Temperance found her mother in the bathtub filled with more blood than water.

With no other family, Temperance landed herself in the foster care system where she found an entire world she had no idea existed. She learned very quickly not to trust or allow anyone to know what she thought or felt. And she never judged a book by its cover.

However, it took her until last year to learn that just because a man dressed up nice, appeared to be nothing like her father, or foster father, and had the means to give her everything she dreamed of, didn’t mean he would love her the way she deserved.

“This party means a lot to my sister. She’s not the Susie Homemaker type so she’s really stepping out of her comfort zone, and ever since she and Cove moved into the neighborhood, about a month before you did, she’s been trying to play cruise director.”

“What does your sister do for a living?” Temperance had always been attracted to men like Ledger. Men with a rough-looking exterior, much like her father, which is why she always avoided them as if they were the plague. Her father had a toughness about him. Of course, being in the Marines had hardened her father in a way she’d never understand. Her mother would constantly make excuses for his occasional drunken outbursts or the way he’d often sit by himself and sulk.

Today, Temperance knew two things about her dad. He’d suffered from PTSD as well as massive guilt over having two families, only she believed he loved his other family more than Temperance and her mother since he left them what little money he had along with the house he owned.

It had come as quite a shock to Temperance and her mother that they’d actually been the second family.

“According to her it’s boring most days and I think my job is better.”

“I’m a counterintelligence officer for the Army.”

“Now that is interesting.” Temperance didn’t know if she should be excited or terrified. Could these people be there to spy on her because of her husband? Or could she use them to help put her ex where he belonged? “How long have you lived on the block?” Temperance asked, not wanting to be alone in her thoughts anymore.

“About six months.” Ledger twisted the lug nuts and pulled the tire off the vehicle with ease. “A buddy of mine owns the house, so I’m just renting. I was glad Cove and Serenity were able to buy so close to me though. I’m going to enjoy watching them attempt this parenting thing. They were both pretty much destined to be single forever when they met.”

Temperance had spent about five minutes with Serenity and her husband since she moved in a few weeks ago. Everyone in the neighborhood had been super nice, and that had made Temperance want to join in and get to know everyone, but being Mathis Browne’s ex-wife made her take a step back.

“They are.” Ledger wiped the sweat off his brow before shoving the new tire onto the wheelbase. “So, are you going to go to the party? I’d be happy to give your RSVP to Serenity.”

“I don’t know. I’ve still got a lot of unpacking and things to do to my place.” Temperance had struggled to make friends while in foster care and it continued after she’d aged out of the system and she fumbled her way into the job world. She thought meeting her ex-husband was the one thing in her life that would change everything.

Well, it did, just not for the better.

“It’s just a couple of hours.” Ledger tightened the bolts as if he were the strongest man on the earth. “And only the neighbors. It will be casual and stress-free.”

“You don’t understand. I bought that place at a really low price because it needs a lot of work.”

Ledger lowered the jack. “Oh. I get it. We all walked through it during the open house. I know what you have to work with and if you’re looking to hire a handyman, look no more.” He pointed to himself and grinned. “I’m your guy.”

“What are you, some everyday kind of hero or something?”

Ledger chuckled. “I wouldn’t go that far, but I’m happy to help. Now, please, let me escort you to my sister’s backyard barbecue. That is, unless you have a boyfriend or something?”

“I wouldn’t say no to the concept, but that’s up to you.” He wiped his hands on his jeans before picking up the rest of the tools and meticulously putting them away in the trunk of her car.

She’d bought this house with her ex’s blood money because she felt like she deserved to use that as her foundation after everything she’d been through with Mathis. It’s not like he’d given her millions, which he and his family had. She’d chosen to stay in New York City to spite her ex as well as to show the world she wasn’t either a prostitute or a gold digger.

Although one reporter had declared they were basically the same thing.

But mostly, she needed to prove to herself she could do what her mother couldn’t.

That had been her plan until she’d uncovered more ugly truths about Mathis. Her heart hurt thinking about the devastation and destruction his family had caused innocent people.

If only she knew what to do with the proof. If only she thought the proof wouldn’t destroy her as well as others.

“You can tell your sister I’ll be there.” She held out her hand. “And you can tell her brother that I’m sorry, but it’s not a date. However, how can I repay you for helping me with this?”

He smiled. “I’d say go on a date with me, but I’ve already crashed and burned.” He pushed his shades up on his nose and snagged his helmet. “No need to repay me. I’m happy to help. I look forward to seeing you at my sister’s.” He switched a key and flicked his wrist.

Her heart hammered and her skin heated.

As he drove away, she fanned herself. If he ever turned up the charm, she’d be in a heap of trouble.
Jen Talty. Everyday Hero Ledger: A Bale Family Novel (Kindle Locations 242-302). Jupiter Press.

In spite of the fact that she first thought Serenity and Ledger might be investigating her, she accepts the invitation to Serenity’s party. It’s after that Ledger turns on the charm and Temperance finds herself falling for him.

In fact Serenity is investigating Temperance’s ex-husband and his father, there’s just some things that aren’t quite coming together. Ledger is also involved in the investigation but from a slightly different angle.

Plenty of intrigue and suspense as the relationship between Ledger and Temperance heats up and so does the investigation.

I think I need to read Cove and Serenity’s story next (link below) and then check out the other authors who write in this series.

More of Jen’s Books in Hot Hunks
Click the Cover for Buy Links! 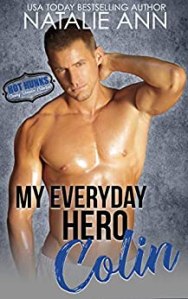 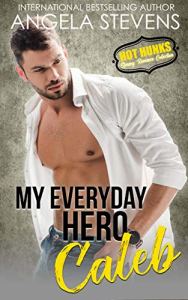 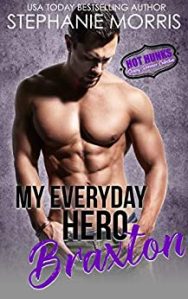