I have a great life. Great job. Great home. Great man.
Everything is perfect. I can’t complain.
So, why am I restless? What is missing?

I’m a lucky guy with an amazing woman in my life.
She’s my perfect match. The yin to my yang.
But something is off. She needs something I’m not sure I can give her.

I’m a busy man with a demanding job.
I don’t have time for a relationship, but I’m always eager to help people find themselves.
When Josie and Grayson step into my life, I’m caught off guard.
She craves the nurturing hand of a Daddy. He isn’t fully in tune with his needs.
I can help them, but with every step I’m getting more emotionally attached.

Can the three of us find a new normal that fills all of our desires?

I’m loving this series as Becca Jameson takes us on a journey of discovering who these characters are at heart.

At the end of the last book, Quinten approaches Grayson suggesting he could have some submissive tendencies. Grayson didn’t take that very well. Grayson is Josie’s Dom and together they create beautiful and sensuous Shibari designs.

This book is going to take them both in a direction they never thought about before. Josie works for Kellen, he’s a Daddy Dom with a 24/7 little, Sabine. As this book opens we see Josie’s curiosity about this lifestyle come to the fore. Lucy, Roman’s little, is visiting and Grayson is going to be late picking up Josie. An invitation to swim and then later stay in the role is more than a little satisfying for Josie.

Grayson doesn’t see himself as a ‘Daddy’ Dom. He’s all about bondage and the sensual side of the lifestyle. Because of that he seeks advise from Roman. While Roman himself doesn’t have an answer he does suggest a counseling session with someone in the lifestyle.

Quinten readily agreed to meet with the couple, he’s always glad to help couples in the lifestyle. In this case, he’s got a couple of concerns but that doesn’t stop him from jumping in with both feet. He invites them to his home for the weekend to explore possibilities that could save their relationship. The problem is that it’s personal for Quinten too.

I watch them for a few moments while a ridiculous idea forms in my head. They’re so cute together. And they care about each other deeply. I’m not sure I can salvage things for them if they can’t meet somewhere in the middle, but I feel confident that without the right guidance, they will end up going their separate ways. The frustration will continue to grow, and neither of them is confrontational about it.

My idea is stupid and irresponsible, and I should definitely keep it to myself and stuff it in my mental trash bin. But, that’s not what I do. “I have a proposal.”

They both look at me.

Too late to take it back now. The floodgates are open. I lean forward, elbows on my knees. I’ve taken leave of my senses. Nothing I’m considering is professional. “Is there any chance you two could spend this coming weekend at my home? I’d like to work with you. Help you figure out this new dynamic.” There. I’ve said it.

They glance at each other. Both sets of eyes widen.

“You’d do that for us?” Josie asks. “Why? I thought this was just an hour of your time to give us some direction.”

I draw in a breath. “I’ve made similar arrangements before. I enjoy helping couples grow. It gives me great satisfaction. And since I don’t have a submissive of my own right now, it’s easy enough to invite others into my home.” I smile warmly. “I think there’s something salvageable between you, and it seems like you don’t have the skill set to straighten things out on your own.”

“Wow,” Grayson stated. “That’s above and beyond.”

I shrug. “You clearly care for each other. I can’t guarantee I can get you through this, but I can try.” I’m kicking myself now because dammit, my motives are absolutely personal. It’s not so much that I intend to hit on one of them. It’s more like I’m attracted to them both, and I want to watch them together. It would make my cock hard to examine their dynamic up close, though. I’m half-hard right now just thinking about it. No sense denying that to myself. I’ve officially lost a few brain cells.

They look back at each other, and I stand. “I’ll give you two some time to discuss the idea.” I step out into the hallway and shut the door. The moment I’m alone, I groan. What the fuck is wrong with me? I’ve never let my personal feelings interfere with my job before. And this isn’t a small thing I’m dealing with.

Josie’s like a new lamb. The girl is itching to have someone care for her. Perhaps her desire to dabble in the world of littles stems from watching Kellen’s little, Sabine, but she squirms and frets with the posture of a little already. Plus, if she’s been managing most of the domestic chores around the house, it’s possible she may crave the idea of having someone take care of her instead.

It’s been a while since I worked with a little, and a couple years since I had one of my own, but something about Josie calls to me. That feeling is rare. It’s the reason I haven’t had a full-time submissive for a long while. I’m particular. I haven’t matched perfectly enough with anyone I’ve played with at Surrender.

And then there’s Grayson. Fuck. I was interested in that man from the moment I started noticing him watching my scenes. I can’t possibly guess what’s deep inside him, but if I go out on a limb, I’m going to say he’s a bit repressed. He probably thinks men should be Doms and women submissives. He probably thinks it wouldn’t be manly for him to be submissive.

As I told him a year ago, and have observed from him since then, I believe he’s a switch. He isn’t just watching other scenes to gather information. He’s jealous. I practically rub my hands together with the desire to show him the other side.

I need to screw my head on straight. This isn’t about me. I need to be careful. This is a dangerous game. Hopefully, I can help them figure out a new dynamic without them realizing I’m turned on by watching them interact like little birds who haven’t left the nest.

They aren’t that young or inexperienced. I presume Grayson to be in his early thirties and Josie in her mid-twenties. Compared to me though… I’m forty-five. At least two decades older than Josie. The woman wasn’t even born when I had my first kink experience.

I swipe my hand down my face and lean against the wall. Maybe they will turn me down, and I won’t have to fret over this any longer.

But what if they don’t? I think about my upcoming schedule. I have a book releasing next week. Starting Tuesday, I’ll have to travel a few days every week for my book tour. At the same time, I have a full docket of clients to see. It’s going to be a long time before I’ll be able to take days off work again, so taking a weekend right now would be perfect. And I can’t think of anything I’d rather do than mentor these two adorable submissives.

I chuckle inside at my thought. Grayson can insist he’s not submissive, but I think he’s kidding himself. I always have. Not that he isn’t also Dominant. He’s a solid Dom in his own right. I’ve seen him do amazing bondage scenes with Josie. Obviously, he’s lived an entire year as a Dom to Josie, but what the man doesn’t seem to grasp is that he can be both. Even at the same time.

The door opens, and I shove off the wall and head back into the room, following Grayson. He resumes his spot next to Josie and holds her hand in his lap. “We’d like to take you up on your offer.”
Becca Jameson. Pleasing Josie: Surrender, Book Five (Kindle Locations 539-581). Becca Jameson Publishing.

The entire weekend is eye-opening on many levels, and even Grayson has to admit there’s something between the three of them.

Quinten has to come to terms with a lot of things, including his decision to walk away.

This is a journey for the open-minded, it is full of sensuous scenes, and kindle melting sizzle.

I can’t wait to see what’s next in this series. 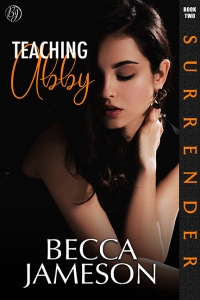 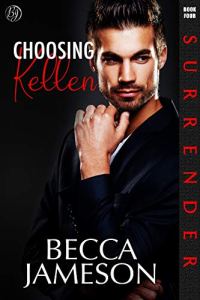 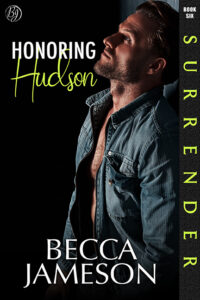