All Julia can remember are the horrid sounds that still haunt her to this day.

Found on the verge of death, Julia wakes up with a shocking realization; she doesn’t know who she is. Unable to walk, she finds herself at the mercy of a handsome Duke, and though merciful in his care, the desire he stirs up inside her is utterly merciless.

Douglas Wilson, Duke of Langston, has been living in despair ever since his mother left him. Deemed a scandalous child, he has spent his days alone, avoiding all notions of love. But when the alluring Julia comes under his roof, she ignites a dangerous fire in his soul.

With Douglas destined to marry another, Julia is convinced she has no place in his life and flees. When her trail runs cold, Douglas’ last clue is the description of an infamous hired killer. A contract signed in blood by a familiar stranger…

Douglas Wilson, Duke of Langston frequently hunts his lands with his butler and friend Edward. On this particular day as they approach the Crag they see what appears to be a body. Dismayed by the though of some unfortunate falling to their death, Douglas approaches the body. What he finds surprises him and he immediately takes action. The young woman was injured yet alive.

The Duke’s housekeeper Mary tends the young woman and finds only a handkerchief with the embroidered initial J as a means to identify her. When the mysterious woman wakes it’s to find she has no recall of her name, where she’s from or what happened to her.

In spite of not knowing if she is betrothed or married ‘J’ finds herself falling for the Duke and he for her.

‘J’ could see the Duke’s internal battle unfolding as his brow drew down heavily over his eyes again, and so, she decided to thank him for saving her life now that the air was clear. “Mary told me of your heroism on the Crag. You have surely saved my life and I cannot thank you enough for your kindness, Your Grace. I will see to it that my debt is paid in full once I am recovered.”

“I did what anyone would have done, ‘J’. You survived what many a man has not,” he replied, feeling flattered by her suggestion of his heroism.

She thinks me a hero—

This softened Douglas’ reservations and he continued to answer her previous question as they stood by the edge of the grassy lake. “You know, I spent a lot of time here as a boy. It was welcome relief from a life of cruelty. I haven’t brought another soul here since I was eight-years old.” He explained to her as she looked on patiently.

“I’m so sorry, Your Grace,” ‘J’ replied, unsure of what to say, but maintaining her approachable and patient sense of calm. She wanted to hear more.

“It was not all sorrow, ‘J’. I was blessed with a devoted Mother before… certain things took their toll upon her. She tutored me extensively in philosophy and astrology. We would walk along this very lake and watch the birds, much like we are doing now. She was wonderful to me. I suppose I still treasure those times,” Douglas replied, trying to avoid becoming emotional.

“What happened to her?” ‘J’ asked, rather bravely.

“Did your Father not look for her? Perhaps she’s still out there, Your Grace, waiting for you,” ‘J’ softly replied, trying to shed an optimistic light upon the grim conversation.

“I do not discuss my Father.”

‘J’ was struck by his stalwart constitution and hardy resolve. She thought it incredible that a man who had seen so much misfortune, although he refused to expose it in its entirety, could refrain from any self-pity or grim desolation. He impressed her, both in body and spirit.

As he spoke, she let herself contemplate his handsome features; how his dark eyes and thick eyelashes sat proudly on his face, how his perfectly defined jawline tensed as he spoke in earnest about his hardships.

His broad shoulders did not look like those of a nobleman and it was clear that he did not shy away from assisting Edward with the heavier side of housekeeping. She felt a keen flush of excitement as she regarded his physique. Was her corset too tight? Or was she developing a desire for this incredible, unexpectedly complex man? I should calm myself. The Duke saved my life and I should not think of him this way.

Correcting her curious thoughts, ‘J’ decided to disclose her admiration of his character. “You have lived through many pains, yet you do not pity yourself. I admire you, Your Grace,” she pronounced as they gazed over the sunlight that waltzed over the surface of the lake. “I only wish I could tell you tales of my life, yet I find there is nothing to share.”

Douglas enveloped her hand inside his, charmed by the authenticity of this strange, wise girl. “You speak of knowing so little, ‘J’, but I have never witnessed such wisdom, sincerity, and grace residing in a single soul. You know more than you think,” he replied, gazing deeply into her eyes with an unexplainable gentleness.

‘J’ felt her cheeks flush with his suddenly tender words, they seemed to take her breath away. “You are too kind, Your Grace, but I assure you I am most likely no different from any other girl.”

“On the contrary, ‘J’… though this garden sees many a beautiful flower, it has never seen a rose quite like you. In fact, I think I shall call you ‘‘ J’ Rose’.”
Scarlett Osborne. A Scandalous Desire for Duchess Wallflower: A Steamy Regency Romance (Kindle Locations 331-362). Scarlett Osborne.

Now the Duke is betrothed and when she is to visit he sends ‘J’ off to the hospital to be tended to by a doctor who specializes in thing like her amnesia.

Many things begin to unfold when ‘J’ returns to the Duke’s home including the increasing attraction between them.

A very interesting tale, with intrigue, suspense and simmer to sizzle heat. 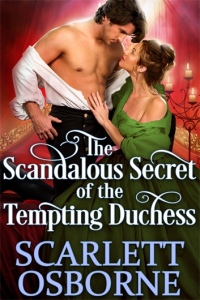 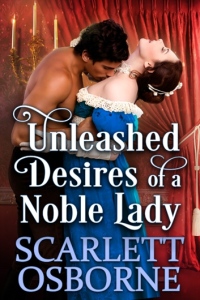 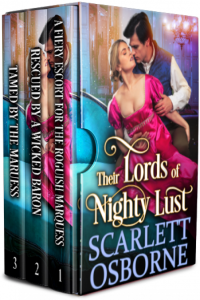 Born in the Sunshine State of Florida, but of both British and Nordic descent, Scarlett Osborne grew up reading historical romances from the land of her ancestors. Fascinated with the British society of the 1800s and armed with a wild imagination, she obtained a degree in Creative Writing and immediately started her career as a Regency romance author.

A daydreamer extraordinaire, Scarlett likes to jump in the shoes of her heroines, immersing herself in her own stories, living the adventures that she wished she had experienced as a child. An avid reader and fan of the outdoors, Scarlett spends her free time either reading or going on long horseback rides along with her two sons.

Get lost in a land of enchantment, where adventure and love await around every corner…Scarlett hopes that through her heroes, you too will get to live a whirlwind romance in the Regency era, when fairytales were real and all dreams possible!