As a Navy SEAL, and then as a Secret Service agent, Liam Ghost’s best work is done out of the spotlight. When he’s assigned to the Vice President’s daughter, the magnetic pull between them leads to a hot, passionate affair. But the public attention on him, and on them, shines too bright a light and he backs away into shadows, leaving both of them pining for what they lost.

Liz Chanel is used to the being in the public eye. Through her formative years, her father served as state governor, senator and now vice president. When she falls for a member of her secret service detail, she feels every piece of her life is perfect…until her lover walks away. Even though she doesn’t need the money, she jumps back into her modeling career in an effort forget Liam.

During an intense reelection campaign for her father, Liz is snatched off the runaway and held to force her father off the ticket.

Liam assembles a team of ex-SEALs to go get his woman back from the kidnappers, and maybe talk her back into his life.

This book opens with Liz being held hostage in a bid to get her father to not declare his run for president.

Liam had once been on her security team, but had requested a change when they found their attraction to be mutual. In spite of their differences they had dated until a few months ago. People were pushing marriage and Liam knew he couldn’t do that, not in the spotlight her family commanded.

That didn’t stop him from assembling a team to go in to rescue her. There were three possible locations and two had just come up empty. Theirs would be the one, and they needed the people involved alive, and Liz safe.

I really got a kick out of Liz as Liam finally gets into the cabin.

Liam raced around the cabin and through the rear door, his Glock leading the way. Before he could proceed down the hall to the bedroom where the hostage had been taken, the sound of breaking glass shattered the silence followed quickly by a gunshot. His heart racing, Liam ran toward the sound, his gun and trigger finger on the ready. He swung around the door frame and came face-to-face with the barrel end of a Glock.

“Don’t shoot,” Liam yelled. He ducked to the right as a bullet zinged passed his head.

“Damn it. You almost shot me.” Liam stepped forward and snatched the gun from Liz’s hand.

“Well, hell. I couldn’t wait for you, now could I?” She slapped a hand on her cocked hip. “What took you so long?” Dressed in a matching pink bra and tap pants, her four-inch heels looked completely wrong and yet, so damn sexy. But then, she could make a burlap bag sexy. She tossed her long, dark hair over her shoulder and gestured toward the injured man on the floor. “I have to do everything myself.”

Before he could answer, the front and rear doors burst open and his team charged though guns at the ready. Behind them, a swarm of FBI filled the small area.

His team lowered their weapons while the agents stayed on guard. On the floor, Sampson moaned.

Liam slipped his arms from his coat and held it out for Liz. She had to be freezing and, to be honest, he wanted to be the only man who got to see her dressed like this.

“Just a minute. That bastard threatened to rape me,” Liz said and kicked him in the ribs with the pointed toe of her shoe. “Whew. That felt good. Now, give me your coat.”

As soon as she grasped Liam’s jacket, she was surrounded by the men wearing heavy, black vests with FBI on them. With them were a group of men and women attired in white camo and earpieces. He tagged the second group as Secret Service, even though he didn’t recognize any of them.

A man dressed in a suit and heavy trench coat followed the other two groups into the room and stepped up to Liz. “Ms. Chanel, I’m Michael Brandt. I’m the new head of your Secret Service detail. I need for you to come with me.”

She flinched away when he touched her shoulder. “I don’t think so. Where’s Liam?” She turned until their gazes met. “He’s my bodyguard.”

Liam walked to her side. “Your safety is the most important thing here, Liz. You probably should go with them.”

“What I want is for the people behind this to rot in jail and to go home with you.”

“Ma’am, we have a safe house ready for you,” Brandt said.

“So do I,” she said with a sniff and an upturn of her nose. “It’s called Liam’s house.”

It took a couple of hours to get everything in place for her security. The eight men at the kidnapping site were secured and hauled away by the FBI or Homeland Security, or some other alphabet agency. Liam wasn’t sure which agency took them, and as long as they were never free again, he didn’t really care who took them or where.

As she’d insisted, Liz and Liam were transported to his house while the rest of his team were flown home. Of course, he and Liz were accompanied by her security team. There was no getting around that.

Once inside, he closed and locked his door. Even with Secret Service standing guard, he wasn’t taking any chances with her. Standing in his living room, still wearing his jacket and a heavy blanket, she was the most gorgeous woman he’d ever known, but he was also keenly aware that the issue that had broken them apart was still the elephant in the room.
D’Alba, Cynthia. Hot SEAL, Secret Service: A Navy SEAL romantic suspense (pp. 19-21). Riante, Inc. Kindle Edition.

These two sizzle off the pages as they finally throw off the effects of the night.

There’s still some things to discuss and they won’t be going anywhere until the all the people involved in her kidnapping are in custody.

I love these short stories, they are the perfect bedtime read. 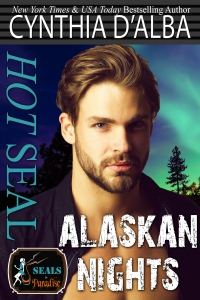 Hi Y’All! I’m Cynthia D’Alba from Arkansas.Here’s a little about me…New York Times and USA Today Bestselling author Cynthia D’Alba started writing on a challenge from her husband in 2006 and discovered having imaginary sex with lots of hunky men was fun.

She was born and raised in a small Arkansas town. After being gone for a number of years, she’s thrilled to be making her home back in Arkansas living in a vine-covered cottage on the banks of an eight-thousand acre lake. When she’s not reading or writing or plotting, she’s doorman for her two dogs, cook, housekeeper and chief bottle washer for her husband and slave to a noisy, messy parrot. She loves to chat online with friends and fans.