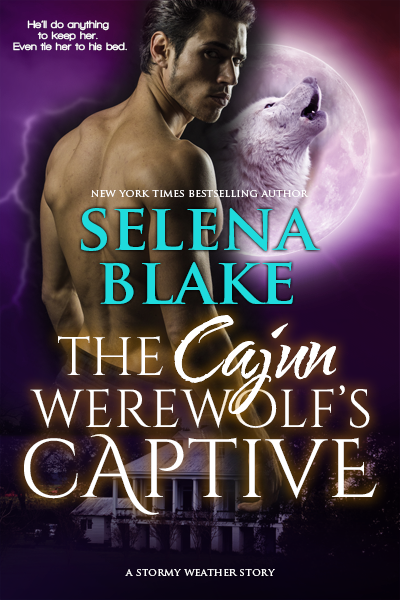 Sebastian Deveraux is the Alpha of his pack and like all the Deveraux men, he’s sexy as pure sin. He’s waited for decades for just the right woman. For his mate. And ten years ago he’d been sure he’d found her in Amanda St. James. But she’d run from him.

Now she’s back. He’ll do anything to keep her. Even if it means tying her to his bed.

Note: This book was released under a different title: The Cajun’s Captive. The book content is the same.

When Amanda St. James gets flowers and a note from Sebastian expressing condolences, she knows she has to see him. Instead of ringing to be let in the gate, she climbs over the wall. She thinks she knows what Sebastian is but wants the confirmation or perhaps a confrontation. When she fled into the night leaving him behind she fully expected him to chase, but he didn’t.

The Deveraux brothers and two of their cousins have formed their own pack. Sebastian is their Alpha but now needs a mate, but she left him years ago and hasn’t looked back. That is until she shows up drenched sneaking around on their porch. He’s determined to get answers and his mate. Was she looking for a story or was she back for him?

She found it hard to formulate an excuse and decided the truth was her best bet.

“I got the flowers. Thank you,” she said and turned back to her own bowl. Chill bumps broke out over her skin as they always did when Sebastian was near. Her nipples began to harden into little peaks. She couldn’t help staring at his fingers, wondering what they would feel like on her skin.

She nodded. “At my father’s funeral. They were beautiful.”

Unease settled over her and she frowned up at him.

“Yes, Sebastian.” She emphasized his name. “The flowers you sent. Last week, after my father died.”

“I have the note in my car. I thought—” she broke off. Oh, it didn’t matter what she thought. Obviously, she’d been wrong. Again. Just like she had all those years ago. Only last time, she’d had the proof of how foolish her thoughts were from his own mouth.

His secretary had probably sent the stupid flowers, but that didn’t explain how he hadn’t known about the funeral.

He knelt in front of her. “What did you think?” he asked, his tone quiet and seductive.

She glanced over at Jules and then André. He was crazy if he thought she was going to offer a confession. Especially in front of his brothers—

She jumped at the terse tone and stared, wide-eyed, after Jules and André as they walked out of the room, gumbo in hand.

She fumed. So, he was still playing games, confusing her. Playing the alpha dog and driving a wedge.

“You should be nicer to them,” she said.

“They understand that we need our space.”

“Oui. Now tell me. What did you think when you got this letter?”

“You know what? It doesn’t matter. I really need to go. I have a plane to catch. Are my clothes ready?”

“They’re in the wash.” He gripped the arms of her chair. “And you’re not going anywhere.”

His tone had changed to one full of authority, only adding to her rising irritation. The perfect example of hot and cold. He’d been so sweet, so tender two minutes ago and now he was acting like a cave man again.

Why the hell had she even come back here? She could have just sent a thank you card. Honestly, what had she expected? Him to throw open his front door, get down on his knees and profess his undying love for her? Admit his stupidity at letting her go in the first place, and then for not coming after her for nine years?

Gathering her wits, she shoved the chair back and stood.

“You know what Sebastian—”

“What?” He was toe-to-toe with her, crowding her. She took a step back, but he followed, a predatory gleam in his eyes.

She swallowed. No. Her eyes weren’t playing tricks on her. There was a danger in him—

His cell phone rang, and she watched his smooth movements as he answered the call. His gaze never left hers as he spoke a handful of words to whoever was on the other end of the line.

Well, at least he was still cordial. Underneath the Alpha dog was a gentleman. A terrier perhaps. No. A wolf. Make no mistake, Amanda. He’s part wolf. Part animal. A hunter.

She stepped back again, fear and curiosity warring with the little voice that told her not to give up. Not to give in. Stand tall. But another voice told her that she didn’t really know him. She didn’t know anything at all. She didn’t know what he was, what he was called, did he shift at full moon, at will? What? It was that same little voice that had so long ago urged her to run.

Perhaps it made her a coward, but when it came to her heart she was a coward. Sadly, she could remember the exact day, the exact moment she’d become a coward.

“Thanks for the gumbo.” She straightened her spine. “You’ll understand if I have your robe sent to you.”

With that, she turned and fled the kitchen. She ran across the pine floors toward the front door. She’d crawl through the mud if it meant finding her keys. Clutching the robe around her, she reached for the doorknob.

Strong arms wrapped around her waist and hoisted her into the air.

“Put me down this instant, Sebastian.” Her voice was full of heat and censure.

He slung her over his shoulder enjoying the feel of her small squirming body. He knew he shouldn’t get so excited by her helpless struggles, but he couldn’t help himself. She beat her small fists against his back as if that would make a difference.

He laughed and nipped at the flesh of her hip. “Not on your life, sweetheart. We’ve gotta get on the road.”

“Oui. Hurricane’s a comin’. Gotta get the cabin ready. Burke and Laurent are still tied up so that leaves me. Don’t want any broken windows.” He knew he could’ve had Jules or André make the drive to batten down the hatches. But the cabin was deeper in the bayou, far enough away for secrets to remain hidden. And he’d already planned on taking care of it himself.

Jules comments had given him a lot to think about and he needed some time alone to mull everything over.

But now that Manda was with him…they could get to the bottom of everything.

He had plans for that gorgeous body of hers. He couldn’t wait to feel her feminine curves against him, under him. Her tight sheath around his cock as he slid in and out of her, bringing them both to the brink of ecstasy. The bayou was perfect for what he had in mind and no one could hear her scream his name.

“There’s no reason for me to go with you,” she insisted, sounding a little more panicked now and a lot more breathless.

“Sure, there is, chérie.” Sebastian opened the front door and stepped out into the hot damp air.

“I don’t think so.” She kicked, her knee nailing him in the gut.

That got her attention. She froze atop his shoulder.

He cursed beneath his breath and started down the stairs toward the garage. The rain showered down on them, soaking the thin fabric of his T-shirt, but he hardly noticed.

“You know I would never hurt you, Manda. Do not even think it.”

She was silent for several long moments as if she was mulling over his words. Good.

“Just let me go, Sebastian. I have a job, a life in New York!” she pleaded.

“And some boyfriend up there as well, no doubt.”

“I don’t have a boyfriend.”

“Really? No boyfriend.” He entered the garage and pulled his key chain from his pocket. His investigator hadn’t reported any man in Amanda’s life for several years but hearing the confirmation from her lips was all the sweeter. Did she still pine for him the way he did for her?

“Can’t. You’ve seen too much.” That much was true. “And besides, traffic has been grounded at the airport thanks to the storm.”
Blake, Selena. The Cajun Werewolf’s Captive (Stormy Weather, Book One) (Kindle Locations 487-545). Ecila Media Corp. Kindle Edition.

Although Sebastian does tie her up to keep her from running, she really isn’t captive to anything more than the storm and her love for this wolf.

There’s so much to resolve between these two, and I really think Sebastian is a bit clueless at times.

A short fun read with lots of snark and some sizzling heat! 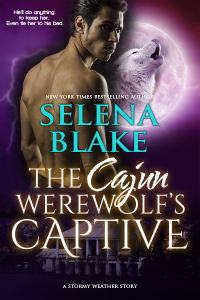 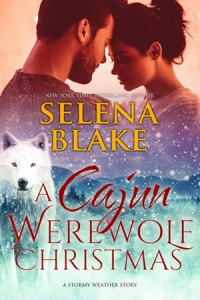 An action movie buff with a penchant for all things supernatural and sexy, Selena Blake combines her love for adventure, travel and romance into steamy paranormal romance. Selena’s books have been called “a steamy escape” and have appeared on bestseller lists, been nominated for awards, and won contests. When she’s not writing you can find her by the pool soaking up some sun, day dreaming about new characters, and watching the cabana boy (aka her muse), Derek. Fan mail keeps her going when the diet soda wears off so write to her at selenablake@gmail.com