He’s got wanderlust and no intention of settling down.

She’s home to stay and has put
her bad boy ex in her rearview mirror.

After spending his life abroad, embracing his freedom at every turn as a foreign correspondent, Roman Chandler finds himself the brother nominated to deal with his ailing mother’s matchmaking shenanigans. Thanks to a coin toss, he needs to find someone to marry and fast. It shouldn’t be that hard in sleepy Yorkshire Falls where women fall over themselves to hook a Chandler man.

But Roman only wants the one woman who got away.

Charlotte Bronson is back home to put down roots and get her lingerie business off the ground. She’s not interested in her past or a man that chose to chase breaking news stories to the far corners of the earth over her. No matter how good they used to be or how combustible their chemistry still burns.

It’s up to Roman to convince Charlotte he’s a changed man and here to stay.

NOTE:
In honor of THE BACHELOR’s 20th Anniversary all three books have been updated and will be reissued with gorgeous NEW covers with the same content but modernized for your reading pleasure. The BACHELOR was the first book that Kelly Ripa chose for her Reading with Ripa Bookclub.

When their mother is rushed to the hospital, the Chandler brothers rush to her side. When her diagnosis isn’t what she feared Raina decides to use the more dire one to, let’s say persuade, her sons to consider marriage and children.

The Chandler brothers are all devastatingly handsome, considerate and honorable. Every woman in town would love to marry one of them. Chase the oldest runs the local paper, The Gazette. He gave up going to college to take over the family business and become the man of the house when his father died. Rick the middle son, is a police officer here in town, he wasn’t into the whole journalism thing like his father and brothers. Finally there’s Roman, he works for AP traveling around the world reporting on all kinds of injustices, uprising and the like.

With Roman’s arrival they’ve come to the decision that they need to keep their mother stress free and also give her one of her heart’s desires, a grandchild. Of course that means marriage first. Right off the bat they exclude Chase from their chosen method of a coin toss. Chase has already given up much for the family it’s better this be between Rick and Roman.

Roman accepts his fate rather gracefully, all he needs is an independent woman, one who can manage without him being around. Marry her, get her pregnant and continue his travels for AP.

Charlotte Bronson is back in town, with a now popular lingerie business. She’s the only woman who dated Roman who, walked away from him and any possibilities. Her parents have a long distance marriage and it hurts Charlotte to see her mother so alone and miserable when her father is Los Angeles following his dreams. No way would she get involved with Roman, it was just asking for the same thing to happen to her.

In an effort to cheer her mother up, she takes her out for a girls day. Hoping to convince her mother to attend the St Patrick’s Day dance and have some fun for a change.

Charlotte hung a BACK SOON sign on the front door and turned to her mother and friend. “Fashion show, anyone? Come on, Mom. You can pick out anything you want. Release the inner you to go with the new outer you. What do you say?”

“I’m too old to go parading around in my skivvies.” Annie laughed, though, and the sound warmed Charlotte’s insides. “But I’ll watch you two.”

“And promise to take home at least one pair?” Her mother nodded. The afternoon proceeded like a pajama party, with Charlotte and Beth trying on the most seductive bras and panties. Even Annie seemed to enjoy not just the show, but the idea of treating herself right for once.

Progress came in various forms, but Charlotte believed she’d made some more today. “Last one,” she called out to her mother and Beth, who waited in the private showing area right outside the individual dressing rooms.

“Right. You girls make me envious for my youth.”

Which she’d wasted on a man who didn’t deserve it, Charlotte thought, but she knew better than to speak aloud and ruin what had been a perfect day. Instead she slipped on the panty set she’d saved for last, one from her handmade, crocheted line. She’d never told her mother she’d been using her talent for work, never thought Annie would come out of her shell long enough to care. But Annie had today.

A loud knock sounded at the shop door. “I’ll get it,” Beth called out. “We’ve been closed long enough to have the townsfolk curious.”

“Whoever it is, get rid of them for another few minutes, okay?” Charlotte didn’t care as much about business as she did about the bonding time she’d shared with her mother. This last part of their day could bring them even closer.

Charlotte heard the two women go up front to see who was knocking. In the meantime, she fastened the matching bra, a new addition to her line. These garments weren’t meant for anything other than intimate seduction.

She glanced in the mirror. She hadn’t counted on the arousing effect of wearing these garments. Her nipples puckered, peeking through the insubstantial fabric, while an empty, aching feeling settled in the pit of her stomach.

And once aroused, her thoughts drifted to Roman. She smoothed her hands over her hips and turned to the side, taking in her profile, her long legs and flat stomach. She had to admit, she filled out the bra well. If only she possessed the same nerve she tried to impart to clients, she’d … what? Charlotte asked herself and forced her mind to play out the answer.

She’d reach out to Roman Chandler. She’d indulge in the feelings she’d possessed since high school. What had started out as a childhood crush had metamorphosed into adult curiosity and longing. What was he like now? What kind of man had he become? She had his devotion to his mother to begin the sketch, but there were many more depths she’d like to plumb.

The only way to indulge that curiosity was to give in to her feelings. Accept whatever he offered, for as long as he offered it— and then have the courage to go on with her life once he was gone. Unlike her mother, who had never taken the steps to move forward, Charlotte would indulge her deepest passion, then walk away.

But while Roman was here, she thought, continuing with the fantasy, while he was hers, she would go for it all. She’d model her handmade creations in front of him and watch as his eyes dilated with longing and need. As if she were enacting reality, her body shook in reaction to her brazen thoughts. Refocusing on the here and now, Charlotte wondered if she had the nerve to act out her fantasies. She could certainly justify the need. After ten years, she obviously wasn’t going to get Roman out of her system by pretending he didn’t exist or she wasn’t attracted to him.

She hadn’t gotten over him by ignoring the feelings. Why not try to get over him by acting on those feelings instead? She wasn’t doomed to repeat her mother’s mistakes if she learned from them.

Her heart picked up rhythm as she contemplated the idea of allowing herself to indulge. In Roman. With Roman.

“Okay, we’re set.” Beth’s voice rang out from the front of the store and the jangling of the store bells jolted Charlotte back into reality. Unfortunately, arousal didn’t dissipate as quickly.

Charlotte shook her head. Time to concentrate on her reasons for wearing these undergarments. To show off her crocheting skills to her mother and perhaps get Annie to use these same garments to break out of her own private prison. Both mother and daughter had huge steps to take in their lives, Charlotte thought.

Footsteps, obviously Beth’s, traveled to the back room.

“Ready or not, here I come,” Charlotte called and stepped out of the small, enclosed room and into the open area with the Queen Anne chairs. But instead of her mother and Beth, she had an audience of one.

While modeling for her mother was one thing it took a lot of effort to go with the flow when she sees Roman.

This is where things really start to get interesting as Roman turns her down. Not because he wants to but because he can’t doom her to the same fate as her mother.

Plenty of family drama, fun interactions and a romance that starts to sizzle before it even makes it to the bedroom.

I hadn’t read this series when it first came out and now I can’t wait to read the next book. 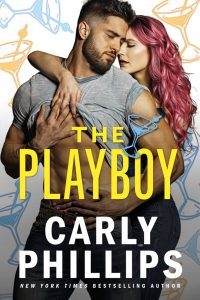