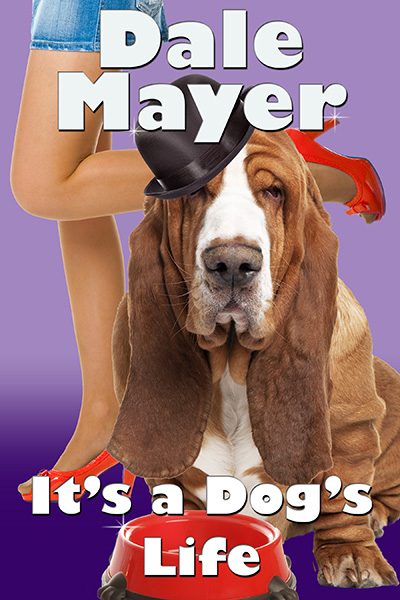 It’s the first day of Ninna’s job in the local animal shelter…and a dog is talking to her. Not just any dog…a fat, old, smart-alecky Basset Hound who says his name is Mosey.

She can’t quit, she needs this job. And then there’s the yummy vet. Who turns out to live across the street from her in a much bigger house than her tiny house. Big enough to hold a few animals – including the mouthy Mosey. With all this going on, she doesn’t have time to worry about the rash of break-ins and the sense of being watched. She’s too busy worrying that she’s nuts.

When Ninna agrees to dog sit for the cute vet from work, she sees it as a trial at being a pet owner and a way to build on her budding relationship with the vet. For Mosey, this weekend means time to get to know each other.

The first person we see in this one is Tory, he’s a thief and he just decided he’s interested in a woman who resides in the neighborhood he’s been robbing.

Ninna is blissfully unaware that someone is watching her as she starts her new job. Although she’s almost panicking with the chaos she sees in front of her. This is obviously more than just an animal shelter. While she waits to fill out paperwork, she hears a voice in her head. Not something she wants and she’s finally stopped seeing the psychiatrist. To discover it’s a dog, well is just the icing. She needs this job to pay the bills.

Stuart is one of the veterinarians and he’s the one who gets her past the front door and a bit settled before starting his day. However it’s when he shows up on her doorstep looking for a kitten that things get interesting.

She recruits her best friend Jane into helping her find and return the kitten.

They rounded the corner to enter the side street, leading them back onto the front of the same block. Ninna nodded toward the vet’s huge house. “There’s his place.”

At the front door, Jane pressed on the doorbell. It pealed loudly and set off a cacophony of barking and yipping. Jane and Ninna looked at each other wide-eyed. “Holy crap. How many dogs does he have?” Jane’s shocked voice was barely audible over the noise.

They could hear sounds of someone yelling at the dogs to be quiet. “Stop it. Move out of the way. How am I supposed to answer the door if you’re all standing there?”

The door opened, and Stuart stood in front of them. He raised his eyebrows in surprise, but the surprise quickly morphed into pleasure. “Ninna?”

She couldn’t help but feel an answering spark inside.

Then his gaze landed on the kitten, which was using Ninna’s throat and collarbone as a monkey bar.

“Oh, you found him. That’s wonderful.” He opened the door wide. “Come in, please. Where was he?”

Stuart reached out to take the kitten from her, however the kitten had other plans and immediately dug in his claws.

Ninna winced. Her throat was going to look like she’d been the victim of a slasher attack. Eventually, with a little coaxing, the kitten let go and Ninna was able to swallow again. She said, “He was in the back alley, caught behind a pile of rubble in the yard of that deserted house almost at the end of the block.” She glanced over at Jane then back to Stuart. “This is my friend, Jane. She helped me find him.”

Stuart smiled at Jane. “Hi, I’m Stuart. Thanks for helping out.”

“Please come in. Let me check him over quickly.” He shut the front door and headed toward the back of the house. “Come back here. I have a room set up for the animals.”

Ninna followed, amazed at the dogs bouncing around them. One had only three legs but it didn’t appear to notice. A big Doberman was missing an ear, had a stumpy tail and his muzzle was scarred.

She avoided touching any of them, period. “You take in animals no one else wants, don’t you?” she asked.

He glanced back, as if surprised by her question. Then noticed the dogs. “Occasionally. If they aren’t going to be adopted out elsewhere, well… sometimes they need a break from the Center and I bring them home for a while.”

“But once you do, it has to be hard to take them back?” she said, knowing it would be hard on her.

Jane piped up. “I’m surprised you’re allowed this many in a private home.”

“I’m not, really. My brother is building me a house on some acreage outside of town. But it’ll be another month or two before I can move in. There will be lots of space for the animals there.”

He entered a room that looked identical to a modified examining room at the Center. Walking around a large table, he carefully lowered the kitten onto it. It took only a few minutes to check the little furry body over. “Good. I’ll give him some food and take him to his bed. He’ll be just fine.”

Stuart looked directly at Ninna, his gaze warming as he studied her. “Thank you. I wouldn’t have wanted to lose him here, not when the new house is almost ready.”

Stuart grinned, his gaze taking in both women. “I don’t know about him, but I sure will.” He carried the kitten into the kitchen. Ninna, not sure what to do, followed. After he’d fed the kitten, he straightened. “Would you ladies like coffee? I’m sorry, I tend to focus on my four-legged friends and forget about the two-legged ones.” He said it in such a boyish way Ninna couldn’t help but be charmed.

Ninna glanced at Jane in surprise. She never drank coffee, but the look she flashed back at Ninna warned her not to say anything. Ninna’s glance went from Jane to Stuart and back again. Jane was giving him her best look-at-me-because-I’m-cute look. If it worked, fine. Any guy who fell for that kind of stupid stunt wasn’t someone Ninna wanted for herself anyway.

Stuart didn’t appear to notice Jane’s attention-getting attempts. Bonus point in his favor. He turned and puttered around the gourmet kitchen. He seemed quite at home there.

“This is a great kitchen.” Ninna studied the huge white oak cabinets. “Do you cook?”

“Sometimes. Being a bachelor, it is either learn to cook or live on take-out food.” He shrugged. “So I learned.” He flashed that shy grin Ninna’s way and damned if her heart didn’t go bump. “How about you?” he asked her.

Jane jumped in. “This kitchen is a dream. I love to cook, but I don’t have anything as nice as this to cook in.”

Ninna rolled her eyes. Talk about a misleading statement. Jane lived in a classy penthouse with the most beautiful gourmet kitchen Ninna had ever seen. Jane also couldn’t cook worth a damn.

Ninna, on the other hand, loved to bake. Not that she should be doing any of that with her diet plans. She was a fair cook, but simple stuff, nothing fancy.

Several of the dogs moved through the kitchen. Ninna stiffened as the floppy basset hound entered. He looked just like the one from the Center. She eyed him carefully, but he ignored her to sniff the little kitten. The other dogs didn’t appear to care. There was no fighting between the animals. All were well mannered.

“What about you, Ninna? Do you cook?”

She flushed, having been sidelined by the arrival of the basset hound. “I love to bake,” she offered shyly.

Ninna’s gaze widened at the same damn voice. She glanced at the talking dog, realized it was staring at her, and hurriedly looked away. “I love to bake breads, actually. I don’t bake many cakes or cookies.”

–Pity. “Not likely,” she muttered softly.

–Hah, there you are. So glad you’ve decided to get over your snit and talk to me.

Against her better judgement, Ninna turned to look at the dog. His tongue lolled off to one side, as he panted deeply.

“You look it,” she snapped, glaring at his rotund body. She turned her back on him. Both Stuart and Jane looked at her in astonishment. Oh, shit.

Embarrassed, she weakly tried to explain her outburst using old excuses she’d practiced years ago, “Sorry, I was replaying a conversation in my mind that hadn’t gone so well yesterday. I guess I wish I’d said more than I did.” Knowing her face was probably shining like a kid’s hot pink glow stick, she mumbled, “It’s time to head home. No time for coffee, sorry. Glad the kitten is going to be fine.” She turned and raced to the front door.

God, how could she have done that?

Stuart doesn’t seem to mind and when her co-workers bring their pets for a check-up day, Ninna debates whether or not she wants a pet. This leads to an interest development between her and Stuart.

A short fun read with a touch of suspense, a surprise or two and some heat.